Lionsgate Home Entertainment // R // August 18, 2015
List Price: $19.99 [Buy now and save at Amazon]
Review by Jeremy Biltz | posted August 23, 2015 | E-mail the Author
The Movie:
Prison movies have been around for a while, and they tend to inhabit the lower echelons of the cinematic universe. In particular, the "prison fight" movie sits comfortably in the exploitation end of the sub-genre. But still, there have been some fun examples, and Vendetta, from Jen and Sylvia Soska, continues this tradition with Dean Cain as an embittered cop facing off against Paul "The Big Show" Wight's gang boss.

Cain plays detective Mason Danvers. He's on the trail of gangster Victor Abbot, played by Wight. He nabs Abbot and his brother, but they both get let out on a technicality. Abbot then kills Danvers wife in revenge. So, of course, Danvers then kills Abbot's brother, making sure that the cops arrive right after and there's plenty of evidence to convict him. He then pulls some strings to make sure to be sent to the same prison Abbot is in. Danvers, you see, is bent on revenge.

At first, it seems that Danvers may be thwarted in his desire, as Abbot is running quite the criminal network in prison. He's top dog, and even Warden Snyder (Michael Eklund) steps lightly around him. Danvers gets some respect from the staff because he was a mildly famous hero cop before going inside, but this doesn't help him with the other inmates. He's beaten down his first night there, and realizes he has to toughen up. But who's the real power behind the drug dealing and murders? It may not be Abbot on his own. Danvers has to wade through a sea of corruption before he can gain his vengeance.

Vendetta is a straightforward movie. It knows the implicit deal it's made with the audience, and is focused on delivering. There aren't crazy plot twists or long stretches of characterization or even really any reflection on the meaning of the violence we're seeing. And that's totally fine, since that's not the kind of movie we are expecting here. What the audience wants to see is Dean Cain be a tough, bare knuckle prison brawler, and eventually fight it out with The Big Show. And that's what we get. 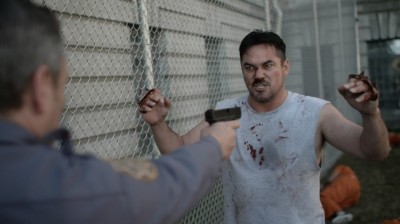 The fights are well choreographed, realistic, brutal and bloody. If you know anything about the Soska sisters, you were expecting the blood, and you won't be disappointed. There are broken necks, stabbings with makeshift shivs, and Danvers' home made spiky brass knuckles. Every few minutes there's another set piece showing off the Soska's effortless grasp of action and violence. The performances are all good as well. Dean Cain is solid, and ably abetted by Eklund and others. But Paul Wight is the standout. Sure, he's not the most subtle actor in the world, but he is very effective, and has a commanding stage presence. I imagine one of the biggest difficulties of the film was making fights with Wight seem realistic, or even having any room for another personality in the scene.

In short, Vendetta is not masterpiece of cinema, but it is a very well done entry in the prison film genre. It is entertaining, realistic (remembering that this is a genre film) and doesn't try the audience's patience. Recommended.

Video:
The video is 1.78:1 widescreen, and looks quite good. The image is bright and crisp, with well-defined colors and nice contrast. Everything is sharp and easily seen. This is a good looking film.

Sound:
Audio is DTS-HD Master Audio 5.1 channel, and sounds quite good as well, although there's nothing particularly outstanding about the sound mix. Dialogue can always easily be made out, and no hiss or other problems is audible. English and Spanish subtitles are included.

Extras:
There are a few minor extras included. A short making of featurette has interviews with Cain, the Soskas, Wight and others, with some behind the scenes footage. There is also a short piece about Riverview Hospital, the abandoned asylum in Vancouver where most of the film was shot. Apparently, it's haunted, and various of the cast discuss their experiences, and one of the sisters take a tour with some paranormal investigators. Finally, there is a short segment about Wight, and his challenges in playing a much more menacing person than he is in real life. There are also some trailers. This is all interesting, but too slight.

Final Thoughts:
The Soska sisters set out to make a cool prison fight movie, and they handily accomplished that goal with Vendetta. Along the way, we get to see Dean Cain in a darker role than I can recall ever seeing him in, and we get to be surprised by Paul Wight's acting chops. It almost goes without saying that if you don't enjoy prison movies, particularly those that hew a little more toward the exploitation side, then you won't enjoy this film. For all the healthy, normal folks out there, though, it's a treat.