Class of Nuke Em High II: Subhumanoid Meltdown was made at the very end of the exploitation era, which is part of the reason the film feels so horribly dated. Before the referential, ironic appropriation of the eploitation/B-movie style became more popular in the mid-1990s, Class of Nuke Em High II: Subhumanoid Meltdown was already referencing the 'styles' and mistakes of exploitation, but slipped up by not parodying them as much as simply repeating them as stylistic choices. As seedy, fly-by-night companies that turned out B movies gradually faded away, Troma kept making the kinds of gross horror flicks and softcore porn that were popular during the golden age of exploitation, and used techniques and themes that were rendered bought-out and co-opted when Hollywood began to use exploitation styles of filmmaking by giving A-list budgets to B-grade scripts. Class of Nuke Em High II works as a piece of the self-contained Troma universe, but by the early nineties, the kind of campy, self referential comedy that is common in most Troma movies became dated and a little insufferable. Nonetheless, Class of Nuke Em High II has small moments that work well inside its own demented bad-movie logic.

After Tromaville High was destroyed in the far-superior first Class of Nuke Em High film, the shadowy Fukumama Corporation replaces it with the Tromaville Institute of Technology, the main setting of Class of Nuke Em High II. TIT has the same group of misfits that populated Tromaville High: Bikini clad girls with big hair and big breasts, muscle-bound guys wearing punk rock regalia or the equivalent of modestly well-made Mad Max Halloween costumes. Muscle-freak B actor Brick Bronsky has no problems stretching his acting abilities to play a bleach blond bro named Roger, who investigates the reasons for high crime at TIT. Roger gets swept into a sex with the subhumanoids at the school, which is overseen by Professor Holt. Roger ends up falling in love with the one humanoid (Leesa Rawland) whose dimwittedness seems to be in equal measure to his.

Holt is played by distinguished Troma regular Lisa Gaye, who personifies camp irony with her outlandishly tall wig and 1950s-style cat eye sunglasses. Her poise and subversively ironic grace make her the only highlight of the film. A natural underground cult superstar, she would have been right at home in the films of John Waters, or Paul Morrisey. 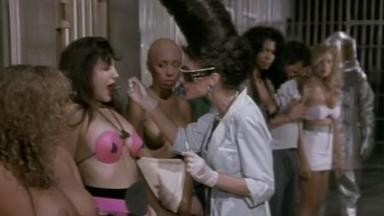 For reason that are never explained, all of the subhumanoids have convincingly slimy mouths in their stomachs. When the stomach mouths start moving, sometimes via stop-motion techniques, the effect works in a basement-level David Cronenberg sort of way, but in a good way. Images of slithering mouths on the stomachs of the subhumanoids evoke the kinds of body-phobia responses that some of his films are replete with. The unintentionally bizarre nature of Class of Nuke Em High II gives the film some of its only authentic, eccentric quality.

But a flaw exists in the subhumanoids that causes them to melt into steamy piles of gore, after which disgusting tumor-like creatures pop out of their stomachs. The cheap-looking special effects used to show the subhumanoids melting are truly grotesque, effective in their sleaziness, adding to the film's flawed, demented quality. From here, it's up to Roger to figure out what's causing many subhumanoid specimen to melt.

The incomprehensible, and unimportant, plot also involves an arbitrarily-squeaky-voiced dean of the school (Scott Resnik) who is a kind of puppet for the Fukumama corporation, which tries to stop Roger. The film finally comes to life near its end, when a giant radioactive chicken stomps across the miniature cardboard Tromaville Institute set.

After Troma's successes in the eighties, Class of Nuke Em High II was produced at a time when campy, self-referential films that ironically celebrated bad filmmaking were not popular, prevalent or well understood for the reflexive works that they actually were. The era of cashing in on cheap, poorly made exploitation films was out of style until filmmakers like Robert Rodriguez and Quentin Tarantino began to rear their heads. These conditions create newer generations of fans for movies like Class of Nuke Em High II, who have kept the grindhouse revival afloat. 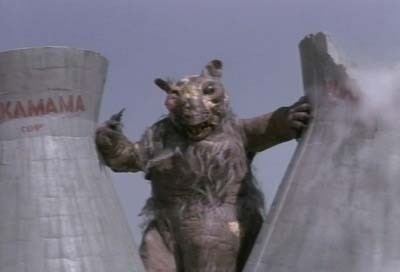 The bad acting, cheaply done special effects, and often incoherent scripts that were characteristics of many Troma movies, have been increasingly appropriated by Hollywood. By the New Millennium, the kind of gross-out humor and parody that Troma got away with in their best movies had been successfully used in slickly made mainstream hits like the South Park movie, and Scary Movie. As far as good trash goes, Class of Nuke Em High II is too little, too late. It charges forward in a sleazy cacophony of blood, guts, and disgusting creatures. But by the time Nuke Em High II was released, the Troma formula had lost its edge.

With the nuclear scare of the 80s over, the film has no opportunity to make the kinds of blunt social commentary that made the first Nuke Em High movie seem relevant to its time and place. The Fukkumama Corporation in charge of the powerplant in Nuke Em High II gives the movie opportunities for the broad, populist anti-corporate insights often repeated by Troma CEO Lloyd Kaufman. But unlike The Toxic Avenger andTerror Firmer, the film is unsuccessful at capturing the anti-authoritarian spirit and orientation towards underground youth culture expressed in better Troma movies.

The Video: The film is on Blu Ray in its original 1.78:1 aspect ratio, now with a 1080P transfer. The clarity of the Blu Ray image unmasks a few of the more garish scratches and rough spots that were on the original source print. Despite sharper picture quality revealing the source material's minimal damage, the addition of more grain and scratches add a unique aesthetic to the film that is often associated with low-budget grind-house movies. Compared to an old VHS copy of Class of Nuke Em High II I've watched, the solid colors in the film are especially bold and vivid in the Blu Ray transfer.

The Sound: Also in comparison to VHS version of the film, the audio is noticeably crisper, if merely functional. There is a 2.0 Dolby Digital track that plays flatly, but any audio distortion, such as pops and hisses, are nearly non-existent.

Extras: Troma has always enjoyed jamming its releases with a large number of special features, which almost always enhances the viewing experience. Often, the extra features, commentaries and behind the scenes documentaries on Troma discs are better than the film, which is the case for Class of Nuke Em High II.

There is a somewhat humorous audio commentary with actress Lisa Gaye, who has a jokey conversation with someone who is obviously doing a bad Lloyd Kaufman impersonation. Despite its comic tone, the audio commentary, as they usually do on Troma discs, offers some good insights into the filmmaking process.

In another special feature, Lisa Gaye is also interviewed for five minutes about her time with Troma and some of the people she has worked with, almost none of whom I've heard of. Once again, Gaye is the highlight of the entire disc.

There is also a music video from a very-dated band that sounds like whichever Motley Crue rip off Troma could afford at the time.

A one minute public service announcement from the early 1980s called The Radiation March makes its way onto the disc, and has appeared on special editions of The Toxic Avenger.

A 12 minute documentary Called TroMa covers the Museum of Modern Art's induction of a Class of Nuke Em High print into the museum's collection, followed by an incomprehensible musical sequence. The induction is a testament to the ways trash cinema can endure. It's also sad that a stolid, safe institution like MoMa lessens the relevancy and softens the edges of un-PC outsider organizations like Troma.

A six minute interview with writer/director James Gunn appears from the set of Guardians of the Galaxy, in which we learn that Gunn had his start writing Tromeo and Juliey.

The American Cinematheque Honors 40 Years of Troma is a two-minute montage of Troma clips with a Motorhead song playing over it. It's superfluous at best, and redundantly included alongside the MoMa tribute.

Final Thoughts: The Class of Nuke Em High II: Subhumanoid Meltdown will appeal to diehard Troma fans, in part because of the abundance of extras on the new Blu Ray. Hopefully, the disc will lead to the re-discovery of B-movie Queen of Cool Lisa Gaye. Outside of the cult of Troma, however, the film is a chaotic, incompetently made mess that can't live up to its almost less incompetent predecessor. The kitsch value of the film will attract non-Troma fans who understand irony, but they probably won't stick around for long.