Olive Films // Unrated // May 26, 2015
List Price: $19.95 [Buy now and save at Amazon]
Review by Jeremy Biltz | posted July 26, 2015 | E-mail the Author
The Movie:
Homages and other nostalgia driven films can be great, but in most cases they need to be fun most of all. They need to hearken back to a simpler time. And if your film is called Zombies From Outer Space, the audience is going to have certain expectations. You don't have to be perfect, but you do have to at least attempt to meet those expectations. This film didn't.

Zombies From Outer Space is a German production, set in rural Germany in 1947. There's a large American military base in the area, and most of the soldiers have a crush on Maria (Judith Gorgass), who makes her rounds in the community selling produce from her family's farm. Her life gets a little crazy when she finds a dead girl on one of her rounds. More girls start turning up dead. And then they find what appears to be an alien body, which might be related to the crop circles appearing in fields around the area. 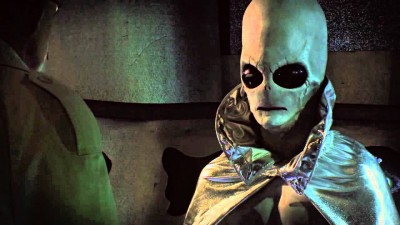 Soon enough, aliens are stalking and murdering women in the area, sending the community into an uproar. Young scientist Robert (Florian Kiml) believes that the aliens are killing the women for their breast milk (no, really), and he and American airman Captain John Welles (Siegfried Foster) team up to fight the alien menace.

This description may have made Zombies From Outer Space sound exciting and interesting. Don't be fooled. It's not. The pacing is slow and dreary. The characters are dull and unsympathetic. The plot meanders and is confusing. And there are no zombies, let alone alien zombies. The German actors playing Americans aren't convincing, whether speaking in German or English. The acting is stilted. The image is blurry at the edges and pale. I sort of get what they were trying to do, pay homage to the great alien invasion movies of the fifties, but they mostly failed. Skip it. 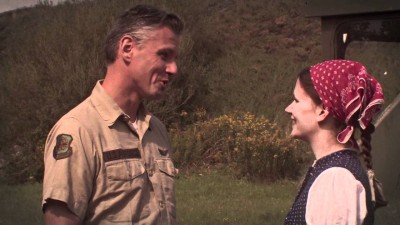 Video:
The image is 1.78:1 widescreen, and has some issues. As mentioned above, the edges of the frame are a bit blurry, which is distracting when the actors move in and out of the blurry region. The rest of the image isn't terribly sharp to begin with, and the color palette is pale and washed out, and occasional bits of lens dirt are visible.

Sound:
Audio is Dolby 5.1 channel but isn't very impressive. The language shifts between German and English. There are some misspelled words here and there with the provided English subtitles.

Extras:
The only extras are a teaser and a couple of trailers. Nothing very interesting.

Final Thoughts:
The main problem with Zombies From Outer Space is that it isn't fun. This kind of ridiculous plot should be presented with verve and a sense of irony, but they seem to be playing it mostly straight here, and that just doesn't work. Combined with the obviously low budget and poor performances, there isn't much worth seeing here.