Arrow Features // R // July 7, 2015 // Region 0
List Price: $39.95 [Buy now and save at Amazon]
Review by Stuart Galbraith IV | posted July 26, 2015 | E-mail the Author
Luigi Cozzi is one of Italy's more eccentric filmmakers. His handful of credits as director (as here, usually as the Anglicized "Lewis Coates") is a strange mishmash of candy-colored confectionary. After collaborating with Dario Argento on several scripts, he made his directorial debut with The Killer Must Kill Again (1975), a fairly typical but not-bad thriller. After directing the little-seen sex comedy The Naked Doorwoman (1976), his next project was the grandly bizarre Godzilla (1977), a radical reworking of the American version of Gojira (1954) which hand-colored the black-and-white film while inserting very graphic atomic bomb aftermath footage, all of it remixed for Futursound, an immersive 8-track sound process similar and possibly superior to the much-touted American system Sensurround.

After that, his credits included Starcrash (1979), an absurdly silly but wildly imaginative Star Wars imitator; two hilariously outrageous Hercules movies (in 1983 and '85) and the lesser Sinbad of the Seven Seas (1989), all starring onetime Incredible Hulk Lou Ferrigno. When his career petered out by the early ‘90s, Cozzi returned to Argento's fold, making two documentaries about his mentor and, amazingly, managing Argento's movie memorabilia store, named after Argento's 1975 giallo classic, Deep Red.

Contamination (1980), originally released in the U.S. as Alien Contamination and also known as Toxic Spawn, is usually written off as a cheap Alien (1979) clone, which, to some extent, is exactly what it is, though it quickly veers off into other, less satisfying directions. Overall the picture isn't terrible, starting off quite well but it loses almost all its steam before the end. Cozzi and the film's producers argued about the type of film it should be, sparring even over the title (Cozzi liked "Alien Arrives on Earth" but the producers insisted upon Contamination, the name of an aborted China Syndrome-type project they had brewing for a time).

Arrow Video's new Blu-ray is a big improvement over Blue Underground's 2003 DVD. We weren't sent final product but rather a BD-R with no packaging and no booklet. 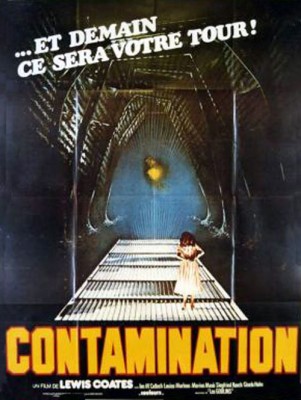 The picture opens wonderfully, with a large, apparently unmanned cargo ship barreling its way into New York Harbor. Intercepted and towed in before causing any damage, the ship is safely docked and NYPD Lt. Tony Aris (Marino Masé), a doctor and others, fearing the ghost ship may be carrying a deadly virus, don hazmat suits and board her.

They find the entire crew dead, their bodies horribly mutilated, as if their internal organs had violently exploded. In the cargo hold, they find hundreds of boxes marked "coffee" actually containing watermelon sized yellow-green eggs. Exposed to heat, they mature and explode, spraying a fatal, corrosive acid. One such egg does just that, leaving Tony the lone survivor of the boarding party.

He's whisked to a top-secret military installation (studio sets with cheap, "futuristic" props) headed by Col. Stella Holmes (Canadian actress Louise Marleau). Following experiments that include blowing up lab rats with the volatile egg mixture, Stella surmises that these strange events are connected to an ill-fated manned mission to Mars. One astronaut, Commander Hubbard (Survivors' Ian McCulloch), claims he saw vast numbers of eggs in a cave found in the polar ice caps, but the other astronaut, Hamilton (German Siegfried Rauch, The Big Red One), insisted Hubbard was merely hallucinating. Soon after, Hamilton died in an apparent plane crash.

The business with the ghost ship at the beginning is very well done, combining faint echoes of Ishiro Honda's The H-Men (1958) with obvious elements lifted from Alien, though here with over-the-top gory makeup effects more spectacularly bloody than convincing. Cozzi generates a real sense of dread in these early scenes, not alas maintained for the rest of the picture.

As was often the pattern on the films Cozzi directed, he butted heads with the producers, who for starters overruled his first choice of Caroline Munro (from Starcrash) for the lead, they substituting Marleau, an older, less voluptuous actress. (To their credit, this may be the only time in movie history a producer actually said, "She's gorgeous but we want an older and less conventionally attractive leading lady.")

Further, the producers imposed James Bond-type spy intrigue that all but destroys the unsettling atmosphere generated in the picture's opening scenes, while nixing Cozzi's desire to climax the film with a monster created via stop-motion animation. Instead, the producers imposed a supremely silly animatronic monster that barely moves at all. It looks like a cross between the Xenomorph from It Came from Outer Space (1953) and the later but far better-realized Audrey II from Little Shop of Horrors (1988).

Presented in its original 1.85:1 theatrical aspect ratio, Contamination essentially looks flawless with an impressively sharp 1080p image with strong color and good contrast. The film defaults to 1.0 LPCM English mono which, for my tastes, has the music (by Goblin) and sound effects track mixed too high compared to the dialogue track; I was constantly adjusting the volume. An Italian track, also 1.0 LPCM mono, is offered with optional English subtitles. The disc is Regions A & B encoded.

The disc is positively crammed with everything and more anyone might possibly want to know about the film's production, some of it repurposed from the earlier DVD. There are more than two-and-a-half hours of featurette material, all in high-def: "Luigi Cozzi on Contamination," "Contamination Q&A," "Sound of the Cyclops," "Luigi Cozzi vs. Lewis Coates," and, most intriguingly, "Imitation Is the Sincerest Form of Flattery," hosted by Maitland McDonagh and Chris Poggiali.

Not included in the material sent to DVD Talk are an announced reversible sleeve and 22-page booklet.

Moderately entertaining for genre fans, especially those with an interest in Italian horror and science fiction cinema, though Contamination never lives up to the promise of its first half-hour. Conversely, the presentation and extras are unimpeachable. Recommended.