Cemetery Without Crosses (aka The Rope and the Colt)

Arrow Features // Unrated // July 21, 2015 // Region 0
List Price: $39.95 [Buy now and save at Amazon]
Review by Stuart Galbraith IV | posted August 19, 2015 | E-mail the Author
People unfamiliar with spaghetti Westerns naturally assume all such films emanate from Italy. More often than not that's at least partly true, but "Euro-Western" is probably a better, all-inclusive description of the genre. That's because what's typically labeled a "spaghetti" is commonly a co-production often but not always including Italy and frequently Spain, where many if not the majority of spaghettis filmed their exteriors (especially Almería), and sometimes West Germany, as was the case of the spaghetti that started it all, Fistful of Dollars (1964), an Italian-West German-Spanish co-production. But West Germany also made its own very popular series of Euro-Westerns on location in Yugoslavia, adapted from the novels of Karl May, and there were East German Westerns, too.

Predominantly French-made Westerns (called "baguette Westerns" by one writer) were rare, but at least one of these, director-star and co-writer Robert Hossein's Cemetery Without Crosses (1969), also known as The Rope and the Colt, a variation of its French title, Une corde, un Colt, belongs on any top ten list of Euro-Westerns. Those who watch a lot of spaghettis will instantly be able to distinguish its subtle and not-so-subtle differences and variations from typical Euro-Westerns and the Hollywood movies that inspired them.

Hossein was apparently good friends with Sergio Leone and reportedly slated for the role in Leone's Once Upon a Time in the West (1968). However, Hossein was under contract to Gaumont at the time and they nixed the deal. (The role in question was the sheriff, ultimately played in the movie by Keenan Wynn.) Nonetheless, Hossein dedicated Cemetery Without Crosses to Leone and, as a lark, Leone is said to have directed one scene in Hossein's film. (See below.)

Cemetery Without Crosses resembles Leone's Westerns in some ways, as well as another similarly bleak French-Italian co-production, The Great Silence, which had French and German stars but an Italian director (Sergio Corbucci). Basically, Cemetery Without Crosses blurs the lines between good and bad even more than the already morally ambiguous Euro-Western, is more grittily realistic and less theatrical than nearly all entirely Italian Westerns, and is extremely dark and despairing.

Arrow Video's 2K restoration can't entirely hide severely damaged film elements, but most of this obscure film looks very good; the major problems are limited to the beginning and ends of film reels. The release includes some great extras, including an interview with the now-87-year-old Hossein. 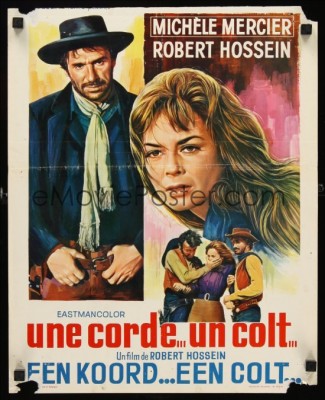 During a black-and-white prologue, three riders flee the land-grabbing Rogers clan. One of the riders, Ben (Benito Stefanelli), wounded, is captured in front of his home and promptly hanged as his wife, Maria (Michèle Mercier) helplessly watches.

She hires a reluctant gunfighter, Manuel (Hossein), who lives by himself in a ghost town out in the desert. He turns up in a bar and, shooting several men determined to rid the town of the Rogers clan, impresses patriarch Will Rogers (Daniele Vargas), who hires Manuel as the ranch foreman.

Manuel, as it turns out, has infiltrated the Rogers clan only to create a diversion to facilitate the kidnapping of the patriarch's only daughter, Johanna (Anne-Marie Balin). Rather than hiring Manuel to gun down the Rogers clan, Maria is more interested in forcing them to bury her husband in a dignified, public ceremony.

Cemetery Without Crosses has myriad fine qualities, though just what it is about the movie that makes it so special is harder to pinpoint. For starters, certainly, it intriguingly blurs the lines of one of the standard Western plots; rival ranchers, one ruthless, greedy, and powerful, the other trying to scrape together a livelihood on a comparatively miniscule plot of land their rivals nonetheless covet.

In Cemetery Without Crosses, the good and the bad become virtually indistinguishable. it's learned that the husband, Ben, and his brothers had stolen money from the Rogers. Manuel infiltrates the Rogers family by murdering a posse hoping to expel the Clanton-like Rogers. A captured Johanna is brutally raped by Ben's brothers (Guido Lollobrigida and Michel Lemoine), with Manuel aware but ambivalent toward their assault. The local sheriff is on the Rogers' payroll and acts like a loyal employee.

Quite unlike the more flamboyant spaghettis, Cemetery Without Crosses is more introspective, telling a remarkable part of its story with a minimum of dialogue, instead relying on expressive close-ups of Hossein and Mercier especially. His underplaying is extremely effective, and he's entirely believable as a professional gunfighter even though there are but two very brief gunfights in the entire film. That the audience doesn't think about this - its story is too engrossing - is a real achievement. Hossein, a busy actor-director in films and theater (he played the drug-addicted gangster in Rififi) makes a memorable antihero.

The scene Leone reportedly directed is one of many highlights. Manuel, ensconced at the Rogers' ranch, sits down with the clan for a huge meal, everyone eating as silently and stoically as Manuel. This silence goes on for several minutes, until Manuel opens a jar of mustard only to be jolted by one of those spring-loaded puppets that leaps out at him, and everyone bursts into innocent laughter. In retrospect, the scene exists to show the humanity of the Rogers; in standard Westerns, the villain usually employees only thugs and psychopaths.

Further, the movie's score, by Hossein's Iranian father André, a composer and tar (a Persian string instrument, similar to a mandolin) soloist, is outstanding, similar to Morricone in some respects but different in other substantial ways, and notable for its title song, sung by Scott Walker. The entire song is reprised over the film's exit music, included in this transfer.

Presented in its original 1.66:1 widescreen*, Cemetery Without Crosses underwent an extensive 2K restoration which looks great a lot of the time but still looks awfully blotchy (with yellowish-green blobs), further compromised by dirt and other debris which is highly visible at the head and tail of each reel. The original camera negative was unusable, and Arrow had to resort to an inter-negative, but the results are better than acceptable, especially for such a comparatively unheralded, largely forgotten work. The Blu-ray defaults to an LPCM 1.0 mono track with a likewise Italian track with English subtitles offered, as well as SDH for the hard-of-hearing and hearing-impaired, but no French track, oddly. The Blu-ray is regions A-B encoded, and the set includes a standard-def DVD with identical content.

Supplements include a new interview with Hossein, "Remembering Sergio," along with archival material, "Location Report," derived from a 1968 episode of France Cinema TV series, and another Hossein interview from a 1968 episode of Cote d'Azur Actualities. All of this material is on the short side, each less than 10 minutes long, but still very worthwhile. There's also an Italian trailer with English subtitles, a booklet with essays by Ginette Vincendeau and Rob Young (the latter about vocalist Scott Walker), and a reversible sleeve.

One of the best and certainly among the least heralded of Euro-Westerns, Cemetery Without Crosses is a real find and a DVD Talk Collector Series title.

*Other sites report the film's original aspect ratio was 1.85:1, the standard ratio of the time for non-‘scope releases in Italy. It's possible it was exhibited there in that ratio, but I suspect the 1.66:1 one is correct, as at least for original engagements in France.