Tough Being Loved By Jerks 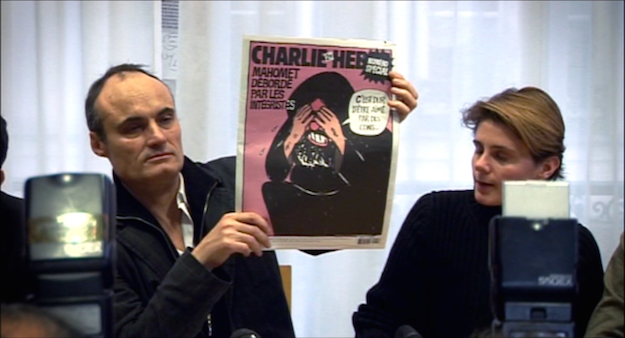 As many of you reading this already know, last January, the offices of the French satirical weekly newspaper Charlie Hebdo were the site of a mass shooting where twelve people were killed and eleven were injured. Many of the victims were cartoonists and editorial staff for the paper, and they were targeted for their frequent pointed and satirical jabs at Islam, which included irreverent cartoon representations of the prophet Muhammad. (Although it is not expressly forbidden in the Quran, any drawing of Muhammad is commonly considered blasphemy in modern Islam.)

With the knowledge of recent events, it's hard to begin watching the new-to-DVD 2008 documentary Tough Being Loved By Jerks without a sense of queasiness. Director Daniel Leconte's film, which covers a 2006 hate speech trial in which a coalition of Muslim organizations sued Charlie Hebdo, opens with images of police standing around a murder scene. Oh god, they've added a present-day prologue. But they haven't. These images are actually footage taken after the killing of Dutch filmmaker Theo van Gogh, who was stabbed to death in broad daylight on a public street in Amsterdam in 2004, in reaction to a short film he directed for television called Submission that criticized the subjugation of women within Islam.

The film then quickly shows how the debate over self-censorship after van Gogh's murder led to the Charlie Hebdo case. The Dutch paper Jyllands-Posten asked for editorial cartoons depicting Muhammad as the artists envisioned him. The twelve cartoons that made the cut run the gamut from straightforward (Muhammad with walking stick leading a mule through the desert) to silly (a cartoonist self-portrait with a stick figure drawing in his hand) to blatantly confrontational (a straight-faced Muhammad with the lit fuse of a bomb poking out of his turban). Three French papers -- the daily tabloid France-Soir and the weeklies L'Express and Charlie Hebdo -- reprinted the cartoons after the Dutch artists came under fire. Both France-Soir and L'Express let go of the editors who OK'd the reprints, which potentially explains why only Charlie Hebdo became the target of protest and the discrimination lawsuit.

It also probably doesn't help matters that Charlie Hebdo made the cartoons their cover story, complete with a new front-page cartoon by one of their in-house illustrators, Cabu. We see the editors and writers spitballing the idea for an emotional Muhammad reacting to the situation, eventually settling on the image which provides the title for this film. Next to a headline which reads "MUHAMMAD OVERWHELMED BY FUNDAMENTALISTS," Muhammad is shown crying into his hands and exclaiming, "It's tough being loved by jerks!"

The queasiness resurfaces when Cabu -- who was killed in last January's attack -- marvels during an interview that the Charlie Hebdo offices were guarded by police for two weeks after that issue was published. 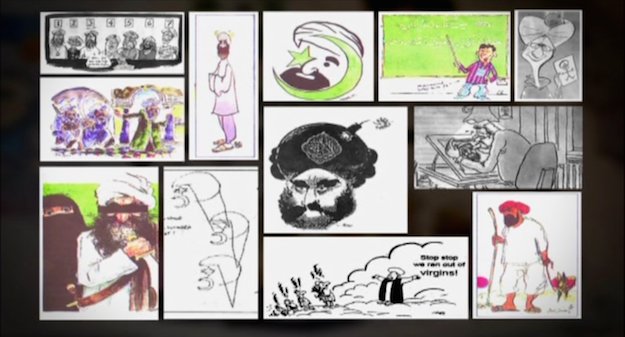 The paper is sued over three cartoons in particular from the issue which are deemed hateful: the Cabu cover, the bomb in the turban, and an English-language cartoon that depicts charred terrorists arriving in heaven, only to have Muhammad tell them, "Stop, stop. We ran out of virgins."

The film's director, Daniel Leconte, clearly disagrees with the suit, and though he includes interviews with lawyers and other proponents of the plaintiffs, he frequently argues with these people and gives more screen time to the folks advocating for Charlie Hebdo in the name of free speech and the separation of church and state. This unwavering point-of-view somewhat weakens the film. Rather than watching people rattle off the reasons why free speech is necessary in a democracy, it might have been more interesting to get into a discussion of where the line between irreverence and hatefulness is drawn. There's a sequence in the film where all the artists in the Charlie office compete to draw the cover of the issue which will be put out at the time of the trial. Many of the drawings are shown to the documentary cameras, and in my subjective (and, may I say, not-totally-prudish) estimation, around a third of them were straight-up racist and could be read as potentially hateful.

"It's like saying we're responsible for those who terrorize us," Charlie Hebdo's managing director Philippe Val complains while discussing his detractors. Well, yeah, Philippe. There's a value in stirring up shit, but when you're in a position to shape the cultural conversation, is antagonism always the most helpful way to deal with these things?

More than the film's simplified take on what isn't really a cut-and-dry situation, Tough Being Loved By Jerks is more frustrating for its repetitiveness and overlength. Leconte basically attempts a chronological retelling of the testimony during the trial, but little of this material is all that surprising or narratively gripping -- mostly it's just wearisome political maneuvering. Two exceptions include the appearance of outspoken anti-Zionist comic Dieudonne who mixes it up with a Charlie writer outside of the courtroom, saying that anyone should be able to "spit on Muslims" in print but that freedom also means that Dieudonne shouldn't constantly be punished for supposed Anti-Semitism. Another interesting personality is writer Mohamed Sifaoui, who describes the disconnect between what Islam preaches and the way too many men use it as a tool to act superior and self-righteous.

Leconte is reportedly finishing up another documentary about Charlie Hebdo after the shooting, and I'm interested to see how that film turns out. Maybe it will provide a fuller, more satisfying history of this ongoing situation. Tough Being Loved By Jerks does offer some interesting background to the recent shooting, but it's also a bit mired in the specifics of the French political climate of 2006. It certainly benefits viewers to have more than a little knowledge of semi-current French culture (or a willingness to Google stray references). This movie meanwhile will certainly provide fodder for further arguments and disagreements over what defines hurtful or helpful or brave or cowardly comedy. 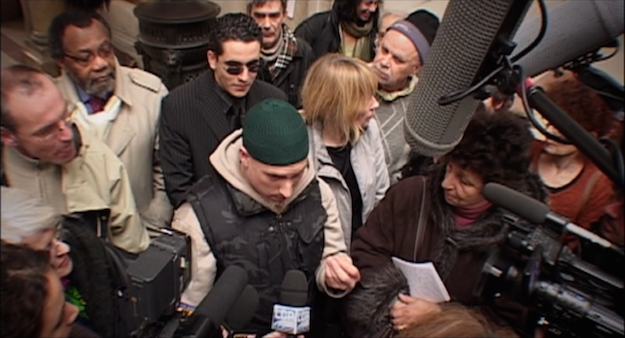 The Video:
Tough Being Loved looks OK for a documentary that was presumably shot using PAL DV cameras converted to NTSC. Even in the non-archival clips, the widescreen 1.78:1 image tends to be a bit indistinct, with jagged lines and pixellation. It gets the job done, but it's not particularly pretty.

The Audio:
There are two audio options: Dolby 5.1 surround and Dolby 2.0 stereo. There's not a big difference between the two, although the musical score gets a little more spread in the surround mix. The film is primarily in French with optional English subtitles. There are a few stray phrases in English that do not get subtitled.

Final Thoughts:
There's definitely a time capsule value to Tough Being Loved By Jerks, as it depicts a 2006 lawsuit against the now-world-famous French paper Charlie Hebdo, but the film is too interested in contradicting its opponents to be consistently illuminating or entertaining. If the subject piques your interest, then Rent It. 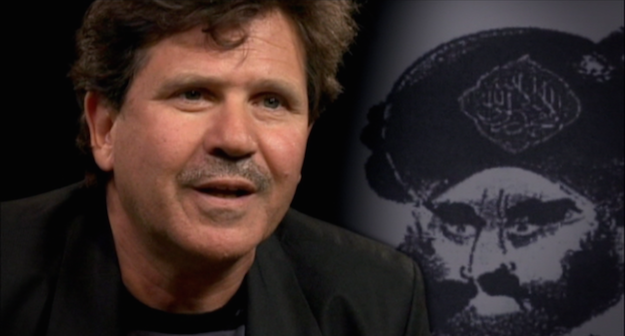