Bold Ones: The Protectors - The Complete Series, The

Timeless // Unrated // September 15, 2015
List Price: $34.99 [Buy now and save at Amazon]
Review by Stuart Galbraith IV | posted February 28, 2016 | E-mail the Author
The Protectors (1969-70) was a short-lived spoke in a "wheel" show of three alternating one-hour dramas, all produced by Universal Television and under the umbrella title The Bold Ones. (The most famous wheel series was undoubtedly The NBC Mystery Movie, another Universal franchise, which featured Columbo, McMillan & Wife, Quincy, M.E. and others.) The most successful Bold Ones was The New Doctors starring E.G. Marshall, David Hartman, and John Saxon, which ran four seasons. The Lawyers, with Burl Ives, Joseph Campanella, and James Farentino had a three-year run, and after The Protectors was cancelled The Senator, starring Hal Holbrook, replaced it. That series was critically lauded but lasted only eight episodes, two more than The Protectors.

All of the Bold Ones were adapted from earlier made-for-television movies. In the case of The Protectors, that TV-movie was Deadlock, which aired in February 1969, seven months ahead of the series' debut in late September. Deadlock, it turns out, is startlingly well made, unusually gritty and realistic, prescient, and ahead of its time. The short-lived series that followed, produced by Jack Laird (of Night Gallery fame) is made with much less care and is far more ordinary, though a couple of episodes are unusual.

The series arrives on DVD courtesy Shout! Factory and Timeless Media, using old but acceptable video masters. The initial TV movie seems complete, though some of the episodes may be syndication masters as they run about 46 minutes, while at least one runs 49. 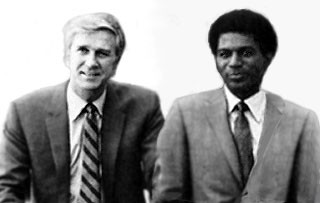 In the pilot, Deadlock, conservative (but not reactionary) Police Lt. Sam Danforth (Leslie Nielsen) and aspiring black politician D.A. Leslie Washburn (Hari Rhodes) work in a decaying urban environment rife with racial tension. A white journalist is found murdered in the predominantly black part of the city, apparently while investigating the killing of a black teenager by a white cop. Danforth and Washburn worry these incendiary events and the police department's potential overreaction to black protests could boil over into a citywide race riot.

Washburn, African-American and native to the neighborhood in question but dismissed by much of the black community as an Uncle Tom, wants time to meet with black leaders to squelch any violence and bring the killer, regardless of his race, to justice. Danforth, on the other hand, believes time is of the essence and distrusts Washburn, a senatorial candidate, believing his actions to be politically motivated.

As a TV-film from 1969, Deadlock is unusually impressive. Those who think the more gritty and realistic depiction of urban crime and crime-fighting began with movies like Dirty Harry (1971) and The French Connection (1972) will be surprised to see almost all of that iconography in a TV-movie made several years earlier. In fact, the trend began with a series of films beginning with Richard Brooks's In Cold Blood (1967), the Frank Sinatra-starring The Detective (1968), Don Siegel's Madigan, and Richard Fleischer's The Boston Strangler (all 1968).

The locations used for Deadlock aren't identified, but it looks like it could be either Oakland or Sacramento, California. Unlike the series that followed, filmed around Los Angeles and on Universal's backlot, Deadlock's locales are generally unfamiliar and obviously set-dressed versions of real urban blight. The fine television director Lamont Johnson films much of it in a semi-documentary style with hand-held cameras, giving the picture the look of something viewers might see on the evening news.

The shows four credited writers (including its creators) were mostly journeymen writing scripts for a variety of shows in myriad genres, though Robert E. Thompson had written a number of Have Gun Will Travel episodes, the screenplay to They Shoot Horses, Don't They? and penned a first draft of the later French Connection. Writer-producer William Sackheim's credits include First Blood in the former capacity and The In-Laws in the latter.

And, as far as I know, none of them were black. That's also surprising as the movie captures the essence of complex urban black issues better than just about any movie or TV-movie of the period, to say nothing about conflicted feelings among white city dwellers about how to deal with police vs. African-American conflict. One of the clever devices of the film, carried over into the series, was to integrate audio from a faux radio talk show hosted by "Al Raymond," with callers expressing various points of view.

Subsequent scripts similarly dealt with hot-button topics like student protests, police and political corruption, and crooked urban renewal projects, but these are handled far more conventionally than the pilot film, though still above average compared to most TV fare. It's easy to see why the series didn't last long.

Probably the most intriguing of the subsequent shows was "If I Should Wake Before I Die," about a convicted rapist-murder (Robert Drivas) on death row who successfully has his guilty verdict thrown out, prompting a new trial. By this point Deputy Police Chief Danforth doesn't buy the man's claims of innocence for one minute but, in conversations with the articulate, intelligent man, D.A. Washburn has some doubts even while preparing the case against him. In the subsequent trial there's a scene near the end featuring guest star Edmond O'Brien unlike any other.

In retrospect, comparisons between Nielsen's Danforth and his later, comical character from Police Squad! and The Naked Gun movies is probably inevitable, but viewers should remember Nielsen's comedy star status came late; prior to that the very humorous Nielsen was typecast playing humorless roles like his character here, and for which he was both very good and extremely prolific for decades. That said, while his performance in Deadlock exhibits a lot of nuance and shading, in the subsequent TV series he's so hard-boiled it's hard to deny that Danforth is a bit like Lt. Frank Drebin without the laughs.

The criminally underrated Hari (pronounced "Hawr-ee") Rhodes is even better, excellent in his role. It's a shame he never became an actor of the stature his talents warranted, and that his career was cut short by an untimely death in 1992.

Using old masters, The Bold Ones: The Protectors looks about as good as one would expect for the release of such an obscure, older series. Even on my 90-inch screen, I nonetheless found it perfectly acceptable other than the fact that some of the shows may have been cut by up to three minutes, though that hasn't been confirmed. The mono audio, English only with no subtitle options, is adequate. The series is presented across two single-sided discs. No Extra Features.

Deadlock, the initial telefilm, is definitely worth seeing as it so clearly anticipates the modern wave of urban cop shows like Law & Order: SVU and Chicago P.D. The short-lived series that followed isn't nearly as good, but still measurably above average. Recommended.