Perfect American (An Opera by Philip Glass), The

NOTE: The images included here are promotional stills and do not reflect the quality of the Blu-ray under review. 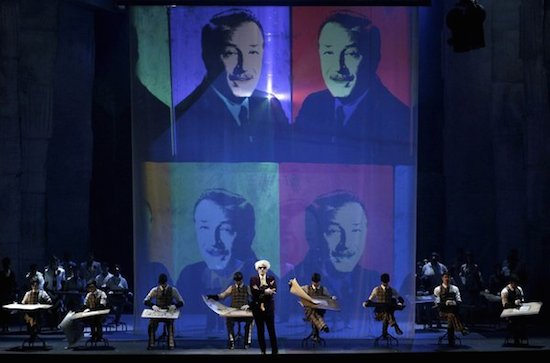 In 2013, composer Philip Glass debuted his opera concerning the last days of Walt Disney, The Perfect American, at the Teatro Real in Madrid. The production was recorded for television, and that is the version available now on Blu-ray. Evocatively staged among an ever-mutating array of scrims and screens upon which animated sketched drawings continually appear, there's plenty to engage both the eyes and ears, although the drama is a little too underdeveloped and elliptical to tie together an otherwise quite appealing package.

Adapted from Peter Stephan Jungk's historical novel, The Perfect American begins with a 65-year-old Walt Disney (Christopher Purves) lying in a hospital bed, tormented, surrounded by employees who are dressed so that they are indistinguishable from each other. Walt flashes back to the early days when he and his brother Roy (David Pittsinger) first started their animation studio. He also rants to his family members about wanting to be cryogenically frozen so that he can transcend death. He mentions his distaste for blacks and hippies, but fails to let his wife and kids know that he has terminal cancer.

Reportedly, the original Jungk novel is from the point of view of one of Walt's animators, who feels underappreciated and strives to get his boss's attention. He succeeds after twenty years, inspiring a strike and getting himself fired. The opera includes this character, Dantine (Donald Kaasch), but he feels oddly tangential in this telling. Rather than helping to contextualize Walt and give us a lens into his complex and somewhat twisted psyche, Dantine just comes across as a self-centered, weak antagonist.

The centerpiece of the show, which closes the first act, imaginatively and effectively gives us this inroad into Walt's thinking (at least politically). Walt has a long discussion with the Audio-Animatronic version of Abraham Lincoln (Zachary James) from what would become the Hall of Presidents exhibit at Walt Disney World. At first, Walt praises the former president embodied by this simulation, saying that he is an inspiration and that going to the Lincoln Memorial always gives Walt chills. But soon, he is second-guessing Lincoln's decisions; sure, the abolition of slavery seemed like a good idea at the time, but would Lincoln have been so eager for equality if he had known it would lead to the Black Power movement? It's one of the few moments where the libretto by Rudy Wurlitzer (who is typically a pretty talented writer, as evidenced his work on scripts like Pat Garrett and Billy the Kid and Walker) becomes memorably poetic, as opposed to blandly dialogic. It's also the rare moment where Walt's decision to expound upon his beliefs (which, to be clear, are right wing, sometimes to the point of fascism) feels like more than cheap irony. The fact that Walt has something tangible to spar with (even if it's just an android) grounds his arguments in a way that most of his bloviating throughout the show is not.

The other most dramatically interesting portion of the opera occurs near the end, when a now-bald Walt strikes up a friendship in the hospital with a young boy named Josh (Rosie Lomas), who has also gone bald. The opera rarely presents us the cheerful image of Walt Disney that most people associate with the man from his publicity and TV shows, but these moments with Josh give this iteration of Walt the opportunity to truly inhabit that role of the father figure imbued with childlike wonder and joy.

A brief visit from Andy Warhol (John Easterlin), proclaiming that he and Disney are the only pure American artists, offers a welcome moment of comic relief. Unfortunately, apart from the enjoyably sly observation that Warhol and Disney are both artists who have others actually make their art for them, this scene just feels like another disconnected concept floating around within the story.

The Perfect American is an interesting work, filled with some wonderfully lush moments from composer Philip Glass and inventive staging by Phelim McDermott. The opera is undermined just a tad by that pesky plot, which is simultaneously too fleshed-out to be dreamlike and too vague to be fully comprehensible. Still, that Lincoln scene is such a keeper that it's almost enough reason on its own to recommend this production to fans of Glass and/or modern opera. 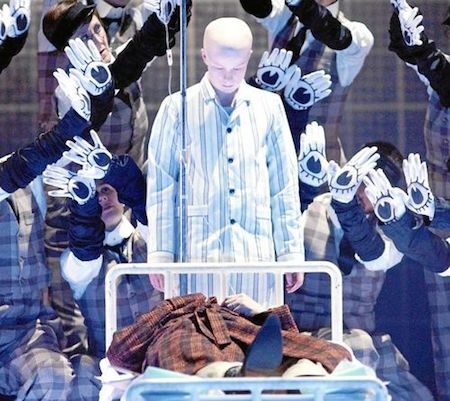 The Blu-ray
The Perfect American is accompanied by a booklet featuring notes by Keith Potter and a synopsis of the opera, in English, French, and German.

The Video:
This AVC-encoded 1080i 1.78:1 presentation has a distinctly "TV" look about it, which is to say that this is video that's not pretending to be anything other than video. Considering that, it looks great, with excellent detail in both the wide shots of the whole proscenium and in the more intimate close-ups. The colors are strong and stable, while the blacks are rich. No noticeable compression issues.

The Audio:
The opera is presented in two audio mixes, DTS-HD MA 5.1 surround and LPCM 2.0 stereo. Both are powerful and exhibit an excellent full-range sound. Personally, I found the ambient difference between the surround mix and the stereo version negligible, but the choice is there if you want it. The disc offers English, French, German, Spanish, Japanese, and Korean subtitles.

Special Features:
Just a Cast Gallery, matching the characters' and actors' names to their faces. It's actually a handy feature if you're writing a review like this. If not... well...

Final Thoughts:
The Perfect American touches upon both the myth and reality of Walt Disney in ways that are both imaginative and engrossing and in other ways that are frustratingly facile and vague. As a piece of music and as a piece of visual art, it succeeds wildly. Maybe that's enough reason to gloss over the failings of the plot. I'm not totally convinced of that, but this production nonetheless comes Recommended. 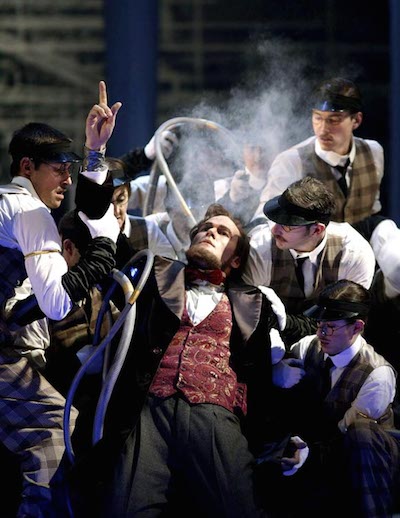