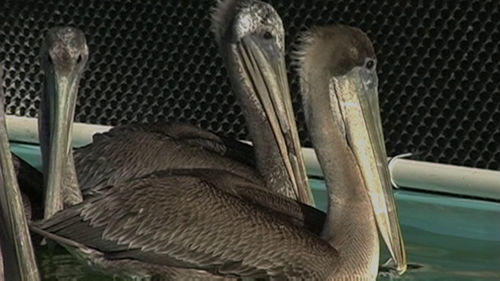 Ever given much thought to that gawky yet majestic fixture of the seashore, the pelican? Documentarian Judy Irving apparently has, and the sweetly meandering Pelican Dreams is the result. In this interesting, well-photographed film, the director of the acclaimed The Parrots of Telegraph Hill explores her own personal love of the pelican, musing over the birds' place in nature as feisty predators and pointing out the varied challenges they face as their habitats become more imperiled (by industrial fishing, global warming, etc.). Although the film is a pretty slight affair at just under 80 minutes, Docurama's DVD edition supplements the movie with a pouchful of bonus footage.

For those who remember The Parrots of Telegraph Hill, which observed a flock of parrots (the descendants of freed house pets) thriving in San Francisco, Pelican Dreams ought to have a reassuringly familiar feel. As with her previous venture, Judy Irving puts a lot of herself into Pelican Dreams - offering her own narrated observations on pelicans with a sort of laid-back, hippie-ish perspective. Like Parrots, it centers upon the avian wildlife of California - specifically, the brown pelican species commonly seen along the Western U.S. coast. Pelicans in general are a pretty hardy breed of bird, with various species living in both salt and fresh water in every continent except Antarctica, but they face plenty of challenges both from other animals and from human intervention.

Although Pelican Dreams functions as a simple nature documentary with long, languid shots of pelicans swimming and diving for fish, Irving digs in a little deeper and concentrates on the hardships facing the animals. In particular, she follows the progress of one female pelican found disoriented and disrupting traffic on the Golden Gate Bridge. Nicknamed "Gigi" by the filmmaker, we follow along as the thin, severely dehydrated pelican is taken to a rehabilitation center where she recuperates with other injured birds. Despite Irving's attempt at humanizing the bird with a cute name, one gets a strong feel for these birds as wild creatures who thrive when their habitat is right - and suffer when it's not. To get a better feel for what a typical pelican's life is like, Irving travels to the Channel Islands off California's coast (the only place in the U.S. where pelicans breed in the wild). On rocky cliffs, the pelicans awkwardly mate and raise chicks, many of which don't survive their first few months due to sibling rivalry for food. It's a pelican-eat-pelican world.

Despite all the adversity pelicans face from themselves and other animals, Pelican Dreams doesn't shy away from the fact that their greatest adversity comes from humans. Gigi's nearly starved condition came as a result of overfishing and climate change, while other pelicans end up at the mercy of fishing lines, nets or attempting to eat tossed fish remains that are too large for their systems. The effects of contaminated waters and oil spills are also shown - including those terrible images of oil-soaked pelicans from the massive BP Gulf of Mexico spill in 2010.

Pelican Dreams comes recommended, especially for fans of The Parrots of Telegraph Hill, although there are times when Irving's crunchy-granola sensibility get in the way of the narrative she's presenting. This is especially apparent when it comes to the second beleaguered pelican chronicled here. Morro is a dignified older male pelican with an injured wing. Instead of being cared for in a rehabilitation center like Gigi, however, he's being sheltered in the back yard of a kindly hippie couple living near Morro Bay, along California's central coast. Morro seems happy enough with two other injured pelicans - yet after they heal and fly off, the bird becomes withdrawn despite a menagerie of other animals in the yard. Intended to show how social these creatures are, the Morro scenes are sweetly observant yet end up meandering too much. Irving is definitely a "turn on the camera and see what happens" documentarian - while it worked for Parrots, here the results are a little more mixed. 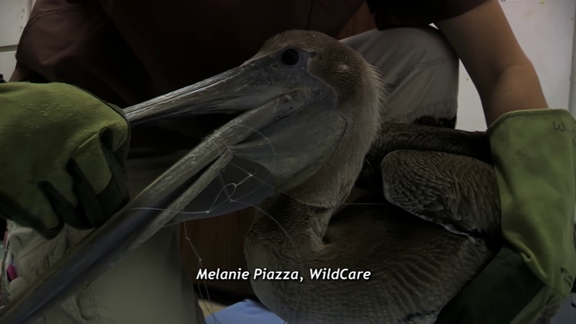 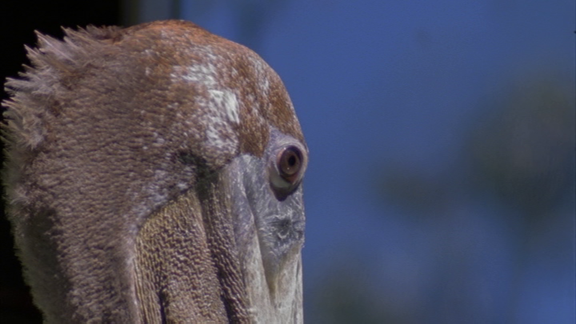 A good, detail-oriented visual presentation is included in Docurama's DVD edition of Pelican Dreams. The digital photography looks good and equally balanced for the most part, although there are certain scenes where it appears that lower-grade digital equipment was used (the scenes at the rehabilitation center, for example). One segment shows pelicans diving in beautiful slo-mo with luscious color and detail. For the most part, however, it's a solid, unexceptional picture which doesn't impress yet serves its purpose satisfactorily.

The film's soundtrack is given a solid 5.1 Surround mix which offers clean dialogue and a spacious mix for the film's instrumental soundtrack (an evocative steel guitar and synthesizers track by Bruce Kaplan). While the track doesn't use surround in a showy way, it's a solid, clean-sounding job. Although it isn't accessible from the main menu, the disc sports an optional English-language subtitle track.

The Pelican Dreams DVD contains a host of outtakes and mini-features. As can be expected, some of these are interesting while others appear slightly too leisurely and drawn-out. Produced by Judy Irving's company, Pelican Media, they include the following items organized into three separate menus:

With Pelican Dreams, documentarian Judy Irving affectionately pays tribute to the humble, gawky pelican. In sharing the painstaking rehabilitation of Gigi (a starved pelican) and other injured birds, one gets a thorough feel for Northern California's conservationists - they do great, often unsung work. Irving's mellow narration lends itself to this very "California" subject - a nice, highly informative diversion for nature film lovers. Recommended. 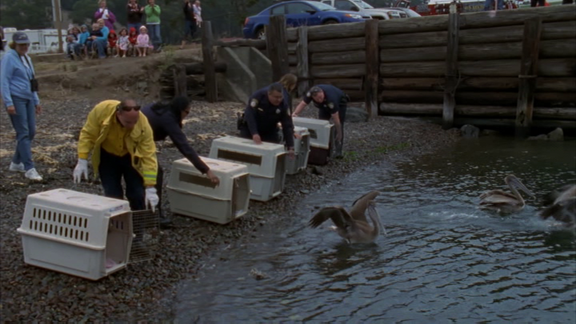 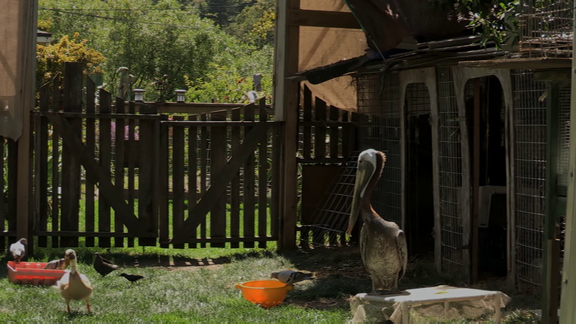