Nathan For You: Seasons One & Two 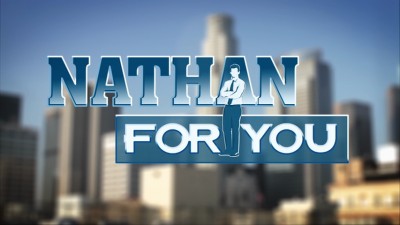 
The Show
The concept here is simple: Nathan Fielder finds small businesses that are struggling and gives them some help in order to turn things around. It's a classic reality-tv trope, seen in plenty of popular series like Kitchen Nightmares and Tabitha's Salon Takeover. The thing is, Fielder's advice, though undeniably intriguing and somewhat effective, verges on business suicide, as it tends to be rather unusual, often antisocial and at times flat-out illegal. And that's a big reason why the show is consistently hysterical, in an "I can't watch this" kind of way.

Most episodes see Fielder help out a pair of businesses, be it a frozen yogurt shop that needs more customers, a restaurant short on diners or a realtor seeking to sell more houses. After establishing the issue affecting the business, Fielder comes up with a way to help, but it's never quite simple. A gas station needs more customers? Fielder convinces the owner to advertise extremely cheap fuel, but to get the price one needs to submit a rebate claim. How do you submit that claim? You have to hike into the mountains, solve riddles and find the hidden mailbox. Despite such ridiculous demands, several willing customers actually appear, and that's when the fun really starts. Because of the winding way episodes unfold, it's hard to pick out highlights, though Fielder's version of a haunted house is amazing, his concept for a pizza place is insidiously clever, and an idea to help a souvenir shop gets so out of hand it ends up inspiring an entirely separate scheme. 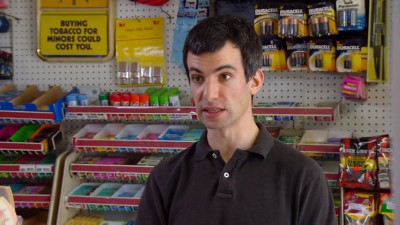 Though the concept is genius and the execution flawless, the show's appeal rides greatly on Fielder, whose Canadian brand of sweet awkwardness is what makes the show so fun. Deadpan to the nth degree, he plays it straight as the earnestly helpful star of the show, oblivious to the damage his schemes could cause thanks to his focus on the goal. Almost any other persona--say, if he was a smart ass or a huckster--would have ruined the feel, as his inability to naturally interact with others is key. That's especially true when he sets up a stunt of his own (like risking becoming a sex offender if he can't master an escape) or as the show builds a running subplot that explains why he seeks to help people. The serial concepts are an interesting element of the series, considering that each episode is self-contained, yet there are callbacks to earlier episodes and recurring characters in service to this idea. This effort to flesh out the character raises what could have been just a prank show into true comedy art.

Nowhere is that more evident than in the "Dumb Starbucks" episode, where Fielder creates a parody of everyone's favorite overpriced coffee shop, earning the ability to legally use the company's trademarks simply by adding "Dumb" before the name. It's the perfect example of how Fielder twists the rules ever so slightly to point out something ridiculous about the law (often with the assistance of a judge and lawyer who are just delightful characters) and then takes the whole scenario to its logical, yet extreme conclusion. It's amazing to see just how far he is willing to go to make a bit happen, all the while adding hilarious twists along the way to heighten the comedy. If it was just a matter of setting up the gag and then letting it play out, it would still be funny, but with Fielder, it's the extra few steps that make him into the Rube Goldberg of comedy. 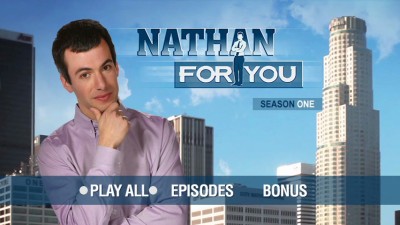 The Discs
The 16 episodes from the first two seasons of Nathan for You are split between two DVDs, which are packed in a standard dual-hubbed keepcase. The discs have mildly-animated anamorphic widescreen menus, with options to play all the episodes, select shows and check out the extras. There are no audio options and no subtitles.

The Quality
The anamorphic widescreen transfers look good overall, handling the documentary-style lighting conditions well, with some noise evident during darker moments. While color is appropriate and black levels are solid, there is a surprising amount of pixelation along hard edges, to the point where it can be legitimately distracting. Other than that though, it's a solid looking presentation.

When a modern television show arrives without a 5.1 soundtrack, it just feels weird, but the Dolby Digital 2.0 tracks on these episodes do fine by the show. The dialogue is clear and crisp, while the frequent score, which is a pitch-perfect imitation of reality-show standards, is similarly strong. The only area where you're going to find anything dynamic is during the opening theme song, which has some decent separation between the two channels. Otherwise, it's just a straightforward TV presentation without any distortion.

The Extras
Good on Shout! Factory to put this one out with a nice collection of extras, starting with a pair of commentaries, as Fielder and co-creator Michael Koman are joined by staffer Salomon Flores on "Private Investigator/Taxi Company" and by awful Bill Gates impersonator William Heath on "Souvenir Shop/E.L.A.I.F.F." As one might expect from Fielder, these are not straightforward commentary tracks, though the first one is only unusual mainly because of Flores' difficulty in expressing himself (and perhaps discussions about women, Adam Sandler's Click and Quiznos.) The second one...hoo boy. If this isn't a bit, then it is quite disturbing. It's very possible that more time is spent on a customer-service phone call than actually commenting on the show. Either way, it's rather entertaining in a very Nathan way.

A pair of deleted scenes are available to check out, from "The Hunk" (1:10) and "Souvenir Store" (3:11). The scene from "The Hunk" features an absolutely ridiculous moment between Fielder and an aspiring actress, while the "Souvenir Store" scene shows faux Johnny Depp hitting on a guy in a very uncomfortable moment. One assumes they were cut for time, since they easily could have been in the show.

In a number of episodes, Fielder and his team create content that we see bits of in the show, but full versions are available on these DVDs for a director's cut of The Web (3:57), and extended cuts of Simon Sees (8:24) and Teen Street (1:20). Honestly, longer versions of these terrible things is almost like punishment, especially considering the repetitive nature of the joke in Simon Sees and the awful personality on display in Teen Street, which somehow ends up even worse. It is somewhat fun though to see more of Heath's overacting in the longer The Web.

The remaining two entries are connected to the "Dumb Starbucks" episode, with more of the awful parody songs Fielder sings (3:58), including ones not heard in the show, along with the full press conference Fielder held (14:17). This one is performance art all on its own, as Fielder gawkily interacts with the media and the onlookers surrounding him. More than anything, it shows how little reporters can be capable of understanding about the things they cover. 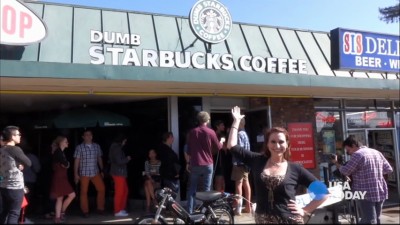 The Bottom Line
Constantly hilarious and ridiculously clever, Nathan for You's first two seasons start strong and only get better, hitting high points repeatedly with both simple bits and complex stunts alike. The presentation in this set is well done, with a healthy selection of bonus content to check out, making it a release fans will want to have and revisit, and one newcomers should be sure to check out.