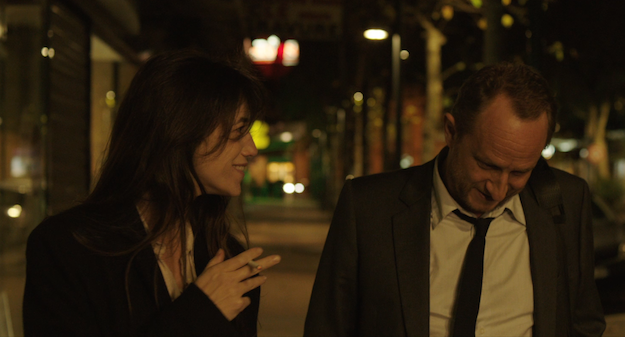 Director Benoît Jacquot's 2014 romantic French drama 3 Hearts has such a killer set-up that it makes the film's somewhat meandering middle tolerable, in the hopes that the story will pay off big. Unfortunately, while the conclusion isn't a misstep exactly, it lacks the fireworks that this story felt like it deserved.

Tax inspector Marc (Benoît Poelvoorde) misses the last train and finds himself stranded in a small town for the night. He spots an attractive woman (Charlotte Gainsbourg) and asks where he can find a hotel, then uses the opportunity to chat her up. They find a hotel for him, but he asks her if she minds continuing to walk around the town instead. Poelvoorde and Gainsbourg generate a palpable electricity that make these seemingly low-key talks terribly exciting. The viewer is left feeling so energized that it immediately leads to intense worrying about what roadblocks the film is about to toss in their way.

The couple wander and talk until dawn, when Marc catches his train and quickly sets a time to meet in a few days in Paris. They exchange no other details. The woman, Sylvie, goes back home to her husband (Patrick Mille) and reveals she is not moving to the U.S. with him. Sylvie goes to live with her mother and sister (real-life mother and daughter Catherine Deneuve and Chiara Mastroianni) and looks forward to her trip to Paris.

Anyone who has seen the old weepie Love Affair or its remake An Affair to Remember might suspect what happens next. When the big day arrives, they miss each other. Marc, who smokes too much, has a minor heart attack and is unconscious just long enough for Sylvie to think he flaked on her. Distraught, she takes the train home and tells her husband she changed her mind, and they leave for Minneapolis.

Then comes the kicker. One day shortly afterward, Marc sees Sylvie's sister Sophie at the tax office crying. He asks what's wrong and offers to help. Before you know it, Marc and Sophie are a couple. Now we've got a story!

The movie then spends a fairly significant amount of time showing the development of Marc and Sophie's relationship, which is where the frustration starts to kick in. That electricity that was immediate and undeniable between Marc and Sylvie is not there with Sophie; this is presumably by design, but it feels like director Jacquot and his co-screenwriter Julien Boivent are playing it safe by keeping Marc's desires weighted in one direction. Through turns of the plot, they keep sending Marc down a path from which it would be difficult to return: Marc and Sophie move in together and eventually get engaged. But if there was a more exciting chemistry between Marc and Sophie then there would be even more emotionally at stake, and the audience's sympathies would be more effectively challenged when Sylvie is brought back into the picture.

As it is, Mastroianni plays Sophie as disarmingly kind and sensitive, which creates a dynamic where Marc feels bad for her after a photograph leads to his late discovery that his fiancee's sister is actually the woman he loves. Seeing the photo immediately rekindles his passion for Sylvie. He is faced with a tough choice, but not because he loves both women the same; it seems like he just doesn't want to hurt this nice lady's feelings. The film wants to make it seem a near-impossible choice, but it doesn't allow Sophie to have a proper stake in this triangle.

The musical score by Bruno Coulais is portentous from the first frame, with prolonged bowed bass notes creating an atmosphere akin to a murder mystery. There is no murder in the film exactly, unless you count the death of romantic idealism. Sylvie does return to France, but she and Marc can't even acknowledge each other. Clearly, there is still a spark there, but they feel compelled to deny it because of their new circumstances. Reality (or the contrivances of the screenwriters) keeps them apart, potentially forever. The would-be lovers do rally late in the film and demonstrate the desire to throw off the shackles of their current situation... But, even then, those bass notes never let up...

Despite the frustrations caused by the lopsided sympathies of the storytelling, 3 Hearts remains largely effective as a drama. The performances are sharp and magnetic; Deneuve is particularly touching as the mother who sees and understands all, but refuses to interfere. And despite faltering slightly in regard to the big picture, Jacquot stages his encounters cleverly so that, moment to moment, the film is never boring.

The Video:
This AVC-encoded 1080p 2.40:1 transfer offers a muted color palette, with frequent highlights of brighter more saturated colors to keep it from being totally drab. Overall the image is clean and crisp, with no significant digital compression issues. Late in the story, a piece of stock footage is incorporated that features some stair-stepping artifacts, but this moment is notable largely for how abnormal it looks compared to the rest of the presentation.

The Audio:
We are offered both a lossless French DTS-HD MA 5.1 surround option and a lossy French Dolby 5.1 surround option (with optional English subtitles). For some dang reason, it defaults to the lossy, so have your remote handy. Overall, it's a clear but not particularly busy mix. Coulais's bassy score gets the most play out of the surround speakers.

(HD, 40:05) - A post-screening Q&A with the director held at Lincoln Center in New York. It's an energetic and entertaining discussion, thwarted only slightly by the fact that Jacquot gives his answers in unsubtitled French and we have to wait for an English translator to follow-up every comment. Charlotte Gainsbourg shows up around 15 minutes in the interview, also speaking French, which leads to some semi-complicated back-and-forths that the translator then has to untangle.

Final Thoughts:
3 Hearts is brilliantly performed and stylishly directed, but its failure to deliver completely on its excellent premise makes it less than fully satisfying. I still don't think these flaws are enough reason to discount the film outright, and the presentation from the Cohen Film Collection is appealing, so this disc comes Recommended.