Universal // Unrated // September 1, 2015
List Price: $44.98 [Buy now and save at Amazon]
Review by Stuart Galbraith IV | posted September 23, 2015 | E-mail the Author
Chicago Fire (2012-present) is an ensemble drama that just keeps getting better and better. The first season's compelling story arcs and good character drama was marred considerably by the show's possibly mandated scenes in every episode of firemen (and women paramedics) constantly disrobing, as if for sexy calendar spreads, and the steamy sex scenes that usually followed. Further, while a lot of good, older actors were doing interesting work in supporting roles, some of the main characters were a bit too pretty and/or glamorous to be believed; one of these, played by Taylor Kinney, was in fact a former male model.

All of this silliness has been dialed way, WAY back, thankfully. And the real surprise watching Chicago Fire: Season Three is actor Kinney himself, who against all expectations has evolved into a really fine as well as charismatic actor. I had very similar qualms about George Clooney during the early seasons of ER, an actor I never imagined would evolve over time to not just one of the best working actors today but also one of the very few of his generation with the charisma of older movie stars like Paul Newman and Steve McQueen. Kinney, who slightly resembles both Newman and McQueen, could with good career management be on the cusp a major career along the lines of Clooney, no small compliment.

Beyond that, it's pretty much business as usual for Chicago Fire, the creation of editor-turned-writer/producer Michael Brandt and writer Derek Haas, and produced by Dick Wolf's (Law & Order) company. Like Wolf's other shows, there's more emphasis on story and dramatic situations than character, exemplified by Law & Order: Special Victims Unit, though there's a lot more going on character-wise than either that series or Chicago Fire's sister show, Chicago P.D., a series still looking for its voice in its second year. 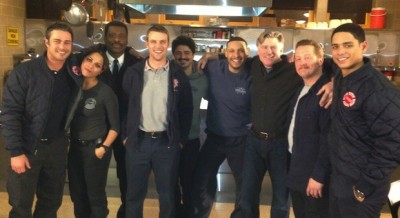 The series resembles forerunners like Emergency! in that Chicago Fire typically centers around two big set-pieces, often one major fire and one smaller scale but equally harrowing rescue operation, emergencies presenting unusual and/or dangerous accident scenes, often freak accidents. The first two seasons stuck to this formula pretty closely but, also good, it veers from this more and more in Season Three. And, like most television drama these days, there's usually a darker "A" story complementing a slightly lighter "B" story, often involving the veteran firefighters and their hapless business ventures and love lives. Some plots are self-contained within a single episode, others are arced over many episodes or even the entire season.

Ladies' man Severide spends the early part of Season Three overwhelmed with grief at the death of his best friend, Paramedic Leslie Elizabeth Shay (Lauren German), killed in a warehouse fire that formed the Season 2 cliffhanger/Season 3 premiere episodes. (She's in several early episodes, in flashbacks.) He begins showing up late to work and takes to the bottle.

Over three seasons, Chicago Fire has noticeably improved from standard hour-television drama fodder into a consistently compelling and most-believable drama with lots of nail-biting suspense in its rescue scenes, all with production values that make forerunners like Emergency! seem quaint by comparison. Even the biggest rating-sweeps episodes of ER only equal the average Chicago Fire in terms of production values.

A series like Chicago Fire must be fiendishly expensive, undoubtedly several million dollars per episode. It's produced on the scale of a theatrical feature, and many of the spectacular fires and accidents appear only intermittently assisted by CGI graphics. Most of these set pieces seem to be done full-scale, with on-set special effects.

It's also worth noting that some of Chicago Fire's most interesting and believable characters are older personnel like Lt. Christopher Herrmann (David Eigenberg), a veteran firefighter and family man who's really the heart and soul of the house, and Christian Stolte as firefighter Randy "Mouch" McHolland, too often part of comical "B" stories but excellent at both comedy and drama.

Twenty-eight 42- to 43-minute episodes (including the crossover shows) are spread across six single-sided, dual-layered discs. The 1.78:1 enhanced widescreen shows look quite good, up to contemporary television/video standards, and the Dolby Digital 5.1 audio is, expectedly, quite lively and full of oomph. Optional English SDH subs are available, and the discs are region 1 encoded.

Kudos to those who, compared to the Season 2 discs, have made it a lot easier to skip past all the FBI warnings and ads, and for including all of the crossover episodes, even though that's meant one more DVD disc than last season.

Better and better all the time, Chicago Fire is Highly Recommended.