Universal // Unrated // September 1, 2015
List Price: $44.98 [Buy now and save at Amazon]
Review by Stuart Galbraith IV | posted September 24, 2015 | E-mail the Author
Chicago P.D. (2014-present) is a handsomely-produced ensemble drama that's generally good though still trying to find its voice, and thus a bit behind its mother series, Chicago Fire, which has really evolved in positive ways over its last three seasons. The newer series painted itself into something of a corner, first introducing star Jason Beghe (as the leader of Chicago P.D.'s intelligence unit, Hank Voight) as a morally reprehensible bully that was a major story arc on Chicago Fire. For P.D.'s first season and beyond, they've only slightly transformed him into a morally ambiguous character - ambiguous mainly in the sense that even the writers seem unsure about him, and keep vacillating about his sense of morality. He's one who, like 24's Jack Bauer (Kiefer Sutherland), is more than willing to break a few heads and deny suspects their rights when lives are at stake because, well, all these people are obviously guilty as Hell anyway.*

The slimiest of the slime are often detained in their precinct's garage-level holding cage, threatened with torture and worse while denied access to a phone or an attorney, though the writers so far have been careful not to let Voight resort to actual murder or the kind of physical torture Jack Bauer routinely inflicted. Chicago P.D. isn't quite the Neocon wish-fulfillment fantasy that 24 was, and the show's writers use other characters to openly question and occasionally object to Voight's methods. But it's still disturbing to watch.

Another problem plaguing the show is that it feels the need to make every episode revolve around the kind of slam-bang big scale crimes that invariably lead to shoot-outs and chases that would attract national news coverage on an almost weekly basis. The series somewhat answers this by implying many of the unit's activities are deliberately done in secret, off the radar and withheld from the media, but given the scale of these shoot-outs and chases one imagines such things would be awfully hard to contain.

As with other Dick Wolf-produced shows, there's a greater emphasis on fast-paced storytelling versus in-depth character analysis, and many of P.D.'s regular characters, while colorful, are still superficially defined, though this is steadily improving. 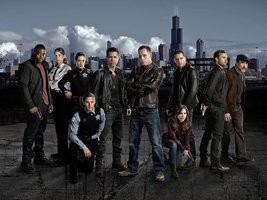 Though not necessary, it helps a lot if the viewer is able to synch-up Chicago P.D. with corresponding airdates on Chicago Fire. At least a third of P.D.'s characters were introduced in first- and second season episodes of Chicago Fire, and beyond the literal crossover shows many episodes refer to events occurring simultaneously.

At the tight-knit Intelligence Unit of Chicago's police department, Sgt. Hank Voight (Beghe) is joined by straight shooter Det. Antonio Dawson (Jon Seda), the brother of paramedic Gabbie Dawson on Chicago Fire; Det. Erin Lindsay (Sophia Bush) has her own mysterious past and complex relationship with Voight, who in Season Two is reunited with her long-estranged mother (Markie Post); Det. Jay Halstead (Jesse Lee Soffer), another character introduced on Chicago Fire, is a hotheaded young detective in a clandestine relationship with uniformed Officer Kim Burgess (Marina Squerciati), a former flight attendant, and passed over for intelligence duty in favor of quietly efficient ex-partner Kevin Atwater (LaRoyce Hawkins). Her new partner is Officer Sean Roman (Brian Geraghty), who runs a private security business on the side.

As with Chicago Fire, Chicago P.D.'s production values are extremely impressive, the show resembling a polished contemporary film more than Dragnet or even NYPD Blue. It's frequently tense and exciting, and the character interaction is always interesting.

Season Two's plots, the crossover episodes excepted, tend to be fairly self-contained and often characters from Chicago Fire put in brief appearances. (The contracts for these actors, moving as freely as they do among three different series, must be extraordinarily complex.) As noted above, the scale of its teleplays are sometimes a bit overly ambitious in wanting to wow audiences with big scale crimes in every episode, but it's undeniable that the show generates a lot of nail-biting suspense and its characters are likeable and/or intriguing.

And, like Chicago Fire, the ensemble cast is good-to-excellent across the board, with Beghe, Seda, and especially Koteas standing out. Conversely, P.D. avoids some of the ratings pandering of Chicago Fire's first season. In short, this is a good show.

Twenty-eight 42- to 43-minute episodes (including the crossover shows) are spread across six (versus last season's five) single-sided, dual-layered discs. The 1.78:1 enhanced widescreen shows look quite good, up to contemporary television/video standards, and the Dolby Digital 5.1 audio is, expectedly, quite lively and full of oomph. Optional English SDH subs are available, and the discs are region 1 encoded.

Kudos to those who, compared to the Season 2 discs, have made it a lot easier to skip past all the FBI warnings and ads, and for including all of the crossover episodes, even though that's meant one more DVD disc than last season.

Though there's still a lot of room for growth, Chicago P.D. is generally impressive and, overall, Recommended.

* Reader Sergei Hasenecz writes, "This doesn't sound morally ambiguous to me. It sounds like Germany in 1938. And why is it that the writers never come up with the idea that a suspect could hold out against torture, or even (gasp!) lie convincingly? Just once 24 should have shown a tortured suspect give false information that fooled Jack Bauer. Just once Hank Voight should beat up on someone, then find out that the suspect is beyond doubt innocent. Think of the story possibilities. But then the writers would actually have to deal with a genuine morality. Other characters question and 'occasionally' object? But no one goes public or even reports to higher-ups? This is more than merely disturbing. 'Under the radar?' Even better! A secret police force! Don't you find any of this objectionable?"