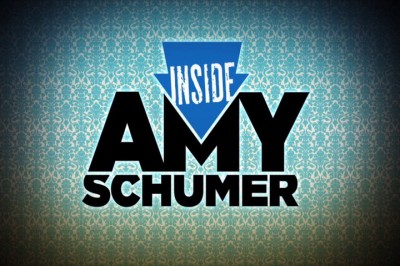 
The Show
With the show firmly established after the first two seasons, Inside Amy Schumer could have gone a few different directions as it kicked off a third amidst its star's rocketing popularity. It could have kept on the same path, exploring societal issues and female foibles. It could have tried to recapture some of its past successes and build on them with recurring characters. It could have done more parody, an easy path to recognizable comedy. Instead, it did a little bit of everything, added a lot of new ideas and earned seven Emmy nominations and two wins, including Outstanding Variety Sketch Series.

Honestly, it may have received those accolades based on the first three episodes of the season alone. Rarely does a show catch fire the way Inside Amy Schumer did to start the third season. From its first bit, "Milk, Milk, Lemonade", an uber-catchy music-video parody of the growing obsession with women's backsides, featuring Amber Rose and Method Man, the show was firing on all cylinders. In the first episode, that segment was followed by a hilarious parody of Friday Night Lights with Josh Charles (centered around rape culture in football), before segueing into a hysterically biting scene on female attractiveness and age with an incredible trio in Tina Fey, Julia Louis-Dreyfus and Patricia Arquette, and a commercial parody on how difficult it is to get birth control. In just one 21-minute episode, Schumer and company took on four major cultural/societal/political topics and was funny, smart and unblinking throughout.

The second episode could have been an opportunity for the show to catch its breath, but instead delivers the Emmy-winning boy-band song parody "Girl You Don't Need Makeup", as well as the silly, yet terrific "Plain Jane," about an average-looking female cop who goes unnoticed in model-filled Miami. That episode is followed by a surprising episode-long parody of 12 Angry Men in which a jury argues whether Schumer is hot enough to be on TV. There's a lot going on here, from the amazing cast, including Dennis Quaid, Jeff Goldblum, Paul Giamatti, Kumail Nanjiani, John Hawkes, Nick Di Paolo and Chris Gethard, to the brutal slams the jurors deliver on Schumer's looks, to the idea of the general value of a woman being assigned to her attractiveness. As heavy as the idea can be, there's a lot of fun, goofy moments (like a dildo face-off and most of Nanjiani's lines) while the quality of the parody is outstanding from both a technical and story perspective. Few comedy shows have ever made an episode of television so good from all angles. 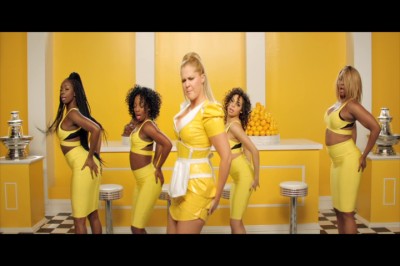 Unfortunately, the season is a bit front-loaded, as the episodes from four on out don't exhibit the same level of brilliance as the first three. There are certainly highlights, as the series' TV parodies, including versions of talk shows and reality series, are consistently good, and some of the relationship-focused sketches, like a museum of wardrobe atrocities and lessons in conversational self-defense, are on-point, but overall, they just aren't as funny or as memorable as the early sketches. Then again, some shows never produce one bit as good as the several examples of genius this season offers, so some perspective is necessary.

As good as Schumer is (and she is terrifically funny no matter what role she plays here), she gets some massive names to play along. Like the first two seasons, this third go-round goes all-in on the guest stars, with the aforementioned big names, all of whom are just wonderful, as well as Schumer pals like Jim Norton and Colin Quinn, along with Bill Hader, Bill Nye, Dennis Quaid, Justin Long and the delightful Jennifer Coolidge (playing a Toddlers & Tiaras-style stage mom.) Everyone blends into the show's style well, never standing out and distracting from the ideas at play, avoiding the effects stunt casting can bring.

Some elements remain the same in season three. There's still some stand-up segments, tied into the sketch ideas, as well as the street interviews, which seem to rely on the same handful of people over the course of the 10 episodes, and deliver some laughs. As it was with the previous two seasons, the "Amy Schumer Goes Deep" interviews aren't particularly hilarious, as she sits down with the founder of Ashley Madison (before the hack scandal), transsexual porn star Bailey Jay, a gigolo, a contestant from The Bachelor, a psychic, a couple in an open relationship, Magic Johnson's son and a formerly Amish woman. However, they are consistently interesting, which makes them a highlight of each episode. It's a mix of the unique subjects and Schumer's casual interview style that makes them compulsively watchable. 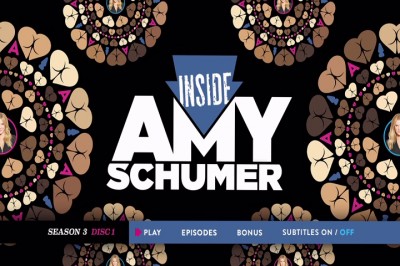 The DVD
Packaged in a standard-width, dual-hubbed keepcase, this two-DVD set splits the 10 episodes of Season Three evenly. The discs have anamorphic widescreen menus with animated intros, with options to play all the episodes, select shows, adjust the language and check out the extras. There are no audio options but English SDH subtitles are included.

The Quality
Like last time out, these anamorphic widescreen transfers look pretty great, reproducing the show's varied looks as well as standard definition will allow. Colors are rich and well-saturated (according to the needs to the scene) while the level of detail is sufficiently high and black levels are sold throughout. The crisp black and white of "12 Angry Men Inside Amy Schumer" is just fantastic. Digital distractions are not evident.

Again, this series only gets Dolby Digital 2.0 tracks. The show may not demand a blow-out audio presentation, since it's often dialogue-focused, but with a musical bit like "Milk, Milk, Lemonade", getting full-fledged surround sound would have captured the energy of the sketch. That aside, dialogue is nice and legible, while music and sound effects are well-separated in the mix.

The Extras
Perhaps it's because you're dealing with one season versus two in the last set, but the extras take a bit of a dip this time around. There's no extended stand-up performances, nor are there any behind-the-scenes segments, but there are outtakes from five sketches (14:55). The best of this is from the beauty pageant segment, which sees Schumer and Coolidge riffing.

An unaired sketch about engagement photos (2:58) isn't bad, and might have slotted in well in the back-half of the season, but isn't hugely memorable.

More entertaining are the four "Amy Schumer Goes Deep" interviews that weren't aired, featuring an elderly gay couple (2:57), an elderly straight couple (3:30), a teenager (4:40) and a genius (3:42). As the "Goes Deep" interviews are always rather fun, for the candid answers and Schumer's participation, these are a welcome addition (even if the 16-year-old serves mainly to remind us all why millennials are a pox on society.) A spin-off interview series would be a welcome side project for Ms. Schumer.

Also included is an Ultraviolet code for the third season. 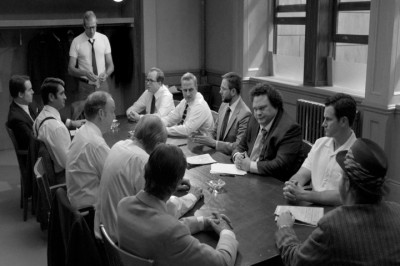 The Bottom Line
Schumer's earned the audience's trust with her work to date, so she could have started slow and not lost anyone, but instead, bursts out of the gate with three of the best episodes she's ever made. Unfortunately, the season loses momentum in the later episodes, but even they offer up a few gems. The discs look and sound very nice and have a decent amount of bonus material, though it doesn't hold up in comparison to the previous set. Fans will want to have it to revisit, but it's a must see for comedy aficionados.