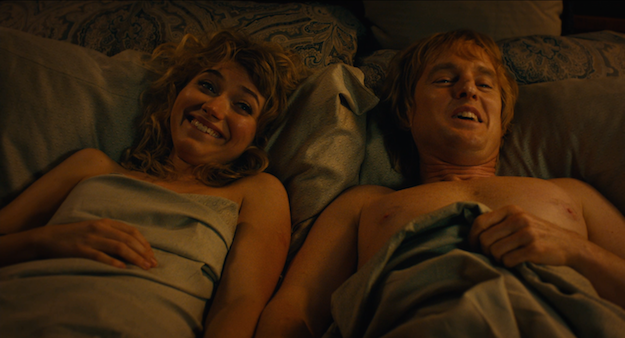 Peter Bogdanovich returns after a nearly decade-and-a-half gap between theatrical features with the new ensemble comedy She's Funny That Way. The film finds the director returning to his What's Up, Doc?-They All Laughed-Nickelodeon pseudo-screwball mode, only with slightly less oomph this time. The laughs are usually there, but it takes a little too long for the film to find its footing rhythmically. The antiquated sensibility of the film doesn't help matters either. The film's gentle mocking of showbiz, infidelity, and psychotherapy, as well as its hooker-with-a-heart-of-gold co-lead character, probably would have felt dated even when the script was originally written in the late '90s as a John Ritter vehicle.

Instead of a bumbly Ritter, we get a calmly neurotic Owen Wilson as theater and film director Arnold Albertson. At the start of the film, Albertson has just arrived in New York to finish casting and start rehearsals on a new Broadway play. His wife Delta Simmons (the dependably awesome Kathryn Hahn) is coming the next day with their kids, so Arnold uses his time alone to order an escort up to his room. The film makes it clear that Arnold is not a total sleazebag, because he takes his date-for-pay Izzy (Imogen Poots, mostly charming but sporting a painful Brooklyn accent that belongs in an early talkie) out for dinner and a carriage ride before they consummate the evening. Then, to top it off, he gives her thirty thou to stop hooking and start a new life. Ignoring the fact that that number probably should have been adjusted for inflation, Izzy does exactly that. She gives up hooking (or "being a muse," as she prefers to think of it) and decides to pursue her dream of acting.

Yes, in case you forgot, we're in farce territory here. So inevitably, Izzy auditions for the role of a call girl (ironic!) in Arnold's play, and inevitably her performance so impresses Arnold's wife that he can't reasonably choose someone else for the role without raising suspicions. Adding to Arnold's headaches is the fact that his leading man Seth (Rhys Ifans, being suitably unsavory) saw Izzy leaving Arnold's hotel room on that fateful night. Seth has carried a torch for Arnold's wife Delta for many years, and this tidbit might be the thing that final propels her into his arms. In the meanwhile, the play's author Joshua Fleet (Will Forte, sweet as pie) finds himself under Izzy's spell while trying to free himself from his overbearing therapist girlfriend Jane Claremont (Jennifer Aniston).

While Aniston has managed to prove her versatility in recent years, her grating performance here shows that while the willingness to experiment is commendable, it's not always going to be fruitful. In this brassy, sassy portrayal of a fairly screwed-up character, Aniston wants to be channelling Barbra Streisand -- and in a Peter Bogdanovich screwball comedy, I don't blame her -- but instead she comes across as a generic cartoon shrew. When her character consistently exposes her patients' confidential foibles, it's not outrageous or funny, it's just despicable.

Bogdanovich clearly has a good reputation with actors, because his film is packed to the gills with big talent in the supporting roles. Cybill Shepherd and Richard Lewis play Izzy's squawky Brooklyn parents, Debi Mazar is Izzy's motherly madam, Illeana Douglas is a hard-edged writer who profiles Izzy, Austin Pendleton plays a judge impossibly smitten with the former call girl, Oz's George Morfogen plays a private eye hired by the judge to follow her around, and Tovah Feldshuh appears as the judge's suspicious wife. That's not even counting the one-off appearances and cameos from the likes of Joanna Lumley, Lucy Punch, Ahna O'Reilly, Jennifer Esposito, Michael Shannon, Colleen Camp, Tatum O'Neal, and Quentin Tarantino.

Unless you're a total grouch, it's hard to hate She's Funny That Way. Sure, the filmmaking is too self-consciously old-fashioned. Sure, the comedy could be a lot sharper and faster. Sure, the script takes the side of unrepentant lechers. But none of these things are capital crimes. The flick is well-acted (for the most part) and never loses its sense of fun. I laughed, I enjoyed myself. Maybe you'll do the same. 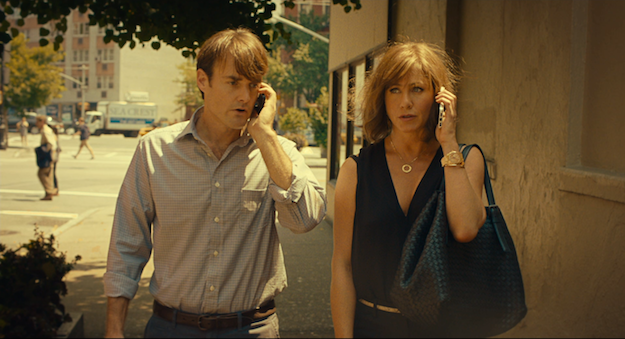 The Blu-ray
The She's Funny That Way Blu-ray comes with a code for Digital HD Ultraviolet streaming.

The Video:
An excellent reproduction of a new digitally shot film. This AVC-encoded 1080p 1.85:1 presentation is clean and crisp. Contrast and shadow detail are good. The film has a distinct "golden" look to it that can be a little overbearing at times, but that's a personal taste issue rather than a technical one.

The Audio:
The DTS-HD MA 5.1 surround soundtrack is a little sedate, but sounds like a new movie, with strong fidelity in the dialogue recording and a bit of atmosphere put into the surrounds. The gypsy jazz-style score by Edward Shearmur is a little too predictably Woody Allen-ish, but it's not unpleasant. The disc offers English SDH, as well as regular English and Spanish subtitles.

- Anyone who has seen Bogdanovich in interviews knows that he is a tremendous raconteur, but unfortunately he seems to be having an off day here. Insights come in dribbles, as he often talks about which scenes were shot "in one" and reiterates what we're seeing onscreen while his co-writer/ex-wife Stratten rarely feels compelled to tease more complicated thoughts out of him.

Final Thoughts:
It's hard not to root for Peter Bogdanovich, a filmmaker clearly in love with the medium who just wants to make movies like the ones he loves watching. She's Funny That Way is flawed, but it's got its share of fun and funniness. In the very least, it would be hard to have a terrible time in the company of this cast. I doubt viewers will return to this film as often as they would (and should) to some of Bogdanovich's earlier comedies, but it's certainly worth one viewing. Mildly Recommended. 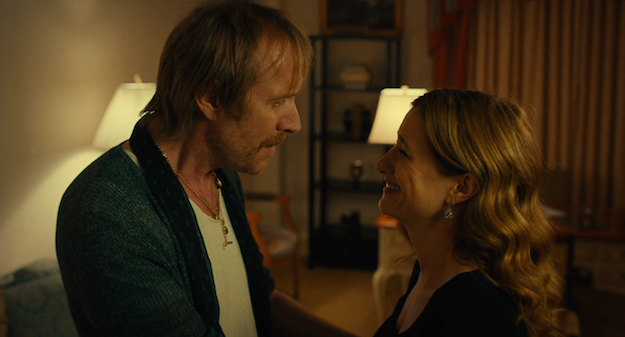