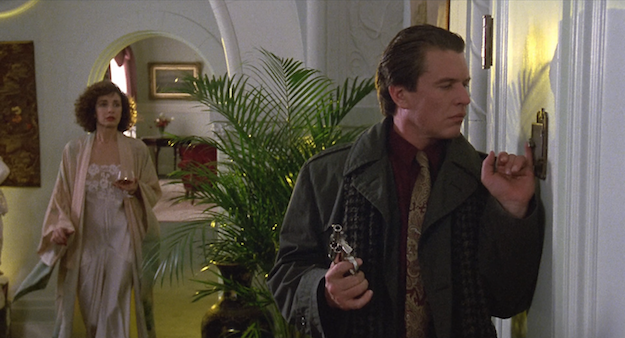 Love at Large, Alan Rudolph's detective movie from 1990, is a sort-of pastiche that exemplifies the writer-director's fondness for oddball romances and old crime movies. Although the film is set in the present day, many of the actors give stylized-on-the-verge-of-stilted performances, complete with screwball-style dialogue exchanges. Many scenes are complimented by opulent sets and costumes that could have been waiting around unused on a movie studio backlot for fifty years. These elements are juxtaposed against more typical present-day settings and more natural performances, to create an almost-but-not-quite David Lynchian uncanniness.

In other words, it's an Alan Rudolph movie. As The New York Times' Janet Maslin put it in her review of Love at Large, "Alan Rudolph operates on the cinema's dog-whistle frequencies, emitting a signal that's perceptible to only a select few. ... You know who you are." I consider myself one of those select few, who is consistently bowled over by the director's unique point-of-view -- if not his consistency. For every great entry in his filmography like 1984's Choose Me, he has three or four mixed-bag flicks like Trouble in Mind or Trixie that are admirable for what they attempt, even if they don't manage to completely pull it off. Love at Large is in that mixed-bag category, although it is more frequently entertaining and appealing than not. Let's call it a semi-success.

Tom Berenger plays Harry Dobbs, a private detective who isn't the sharpest tool in the shed. Dobbs, whose exaggerated gravelly growl very well could have been the model for Christian Bale's Batman voice, is hired by a singing siren named Miss Dolan (Anne Archer) to follow a sandy-haired tough guy named "Rick." Rick is puported to arrive at a specific nightclub at a certain time, so Dobbs stakes it out. He thinks he has found his mark when he spots sandy-haired family man Frederick (Fred-RICK) King (The Silence of the Lambs' Ted Levine) taking his wife (Annette O'Toole) out for a night on the town. The film lets us know almost immediately that this dum-dum has the wrong guy by showing us the real Rick (rocker Neil Young, in a mildly puzzling bit part) arriving at the nightclub just as Dobbs pulls away in his car, on the trail of this regular guy.

The catch, of course, is that Frederick King is not such a regular guy. It turns out, King is leading a secret double life, and he has another family in another state. Rudolph takes a pretty big risk here, potentially alienating viewers who like their mystery stories fairly cut-and-dry. Can we as an audience commit to watching Dobbs follow this utterly wrong lead for almost all of the movie, as long as it proves dramatically interesting? In my case, it took longer than it probably should have to stop protesting and just let the story lead me where it wanted to go.

And where the film actually is going is into offbeat romantic comedy territory. Not between Dobbs and Miss Dolan, or even between Dobbs and one of Frederick King's two wives (the second one played by Kate Capshaw). Instead, there is another private eye following Dobbs, a lovesick lady named Stella Wynkowski (the enchanting Elizabeth Perkins). Stella is only a touch more professional than the man she is following. She is very quickly exposed by Dobbs, which gets her fired by her boss (Ruby Dee, in a wonderful one-off scene). Still, Stella can't get this big dumb hunk off her mind, so she insinuates herself into his case as a partner.

The chemistry between Perkins's serious-minded romantic and Berenger's Dick Tracy comic strip brought to life is charming enough to keep the flick afloat through a bumpy, convoluted middle. The supporting cast is fully stocked with reliable actors, but unfortunately only some of them make an indelible impression (Ann Magnuson as Dobbs's jealous ex, for example). O'Toole and Capshaw are both sadly under-utilized. All is forgiven, though, thanks to a completely satisfying conclusion.

By virtue of its oddness -- and it is a virtue, by gum -- Love at Large might be intolerable to many. If you think you might be on the "dog whistle" frequency, though, it's certainly worth seeking out. 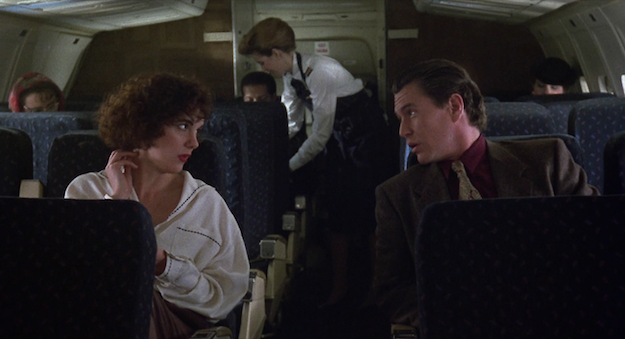 The Video:
For the most part, this AVC-encoded 1080p 1.85:1 presentation looks nice, with rich colors and crisp detail. There are scratches and dirt here and there, but nothing terribly intrusive. Certain scenes, which appear to have an intentional "nostalgic" soft-focus look, don't translate quite as well as the more run-of-the-mill moments, and some of the dark shots appear extra grainy (maybe the film stock was pushed, though, and this is an organic side effect). I never checked out the old 2004 MGM DVD, so I can't comment on how it compares.

The Audio:
The DTS-HD MA 2.0 stereo track is just right. Dialogue is always clean and clear. The music -- including Mark Isham's score and some source cues from Leonard Cohen and Warren Zevon -- is well-rounded and effective. I listened to a portion of the film on headphones, and there are even some clever separation effects utilized in the ambient sound design. No subtitles.

Special Features:
Just three trailers: a surprisingly effective preview for this film, one for Alan Rudolph's other new Blu-ray release from Kino, Welcome to L.A., and one for the recently reissued Tom Berenger vehicle, Shattered.

Final Thoughts:
Love at Large is a highly unusual detective romance from one-of-a-kind filmmaker Alan Rudolph. Some of Rudolph's oddball concepts for the film play better than others, but his willing-and-able cast make even the rough patches palatable. Highly Recommended. 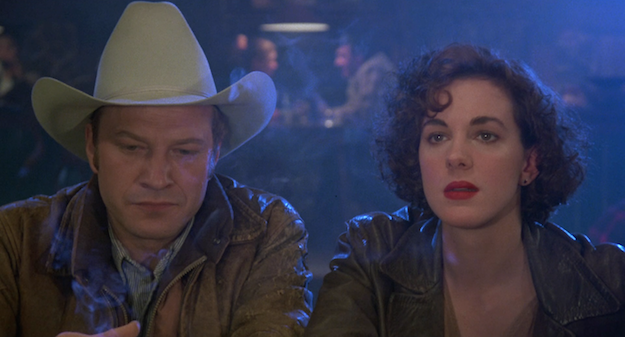