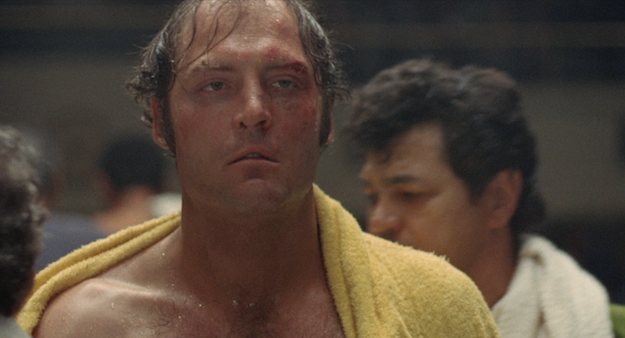 Director John Huston was on a nearly decade-long cold streak, critics-wise and box office-wise, when he made this adaptation of Leonard Gardner's novel Fat City in 1972. It's too tempting not to draw parallels between Huston's status in the movie business and the down-on-his-luck nature of Fat City's protagonist, past-his-prime boxer Billy Tully (Stacy Keach). After all, Huston was a boxer too, in his younger days. The key difference between these two men is that Fat City proved that Huston could rally and make a comeback while Billy's future never seems so bright.

Relatively downbeat, as befitting its era, and shot unglamorously (but still quite beautifully) by Conrad Hall (Cool Hand Luke), Fat City is a surprisingly warm and occasionally funny film that likes its characters even as they make horrendously bad choices. In the opening, we see an out-of-shape Billy at the YMCA, flirting with the idea of getting back in the ring. He sees a young, 18-year-old kid working the speed bag and asks him to spar. It turns out the kid, Ernie Munger (Jeff Bridges), has some real raw talent, so Billy tells him to go visit his manager Ruben Luna (Nicholas Colasanto, Coach from the early years of Cheers). In a more typical film, we would probably track the rise of Ernie to boxing stardom counterpointed by Billy coming to terms with the fact that his career has passed him by. Needless to say, neither character gets such a tidy arc in this film.

Sure, Ernie makes a go of it as a boxer, but rather than rocketing to stardom, he just becomes a run-of-the-mill fighter, as likely to win a match as he is to get KO'ed in the first round. On top of this, he finds himself trapped in a new marriage after knocking up the sweet but conventional Faye (Candy Clark, The Man Who Fell to Earth). You can see the kid's potential being squandered incrementally with every passing minute of screen time.

Billy meanwhile bounces from low-paying job to low-paying job, living on skid row, and drinking his days away. He ends taking a shine to an unstable barfly named Oma (Forbidden Zone's Susan Tyrrell, in her Oscar-nominated role) whose regular old man is doing a stint in jail. Huston stages Billy and Oma's scenes patiently, without too much cutting or fretting about pushing a plot forward. Keach and Tyrrell achieve the same level of shockingly true half-naturalism/half-stylization that Cassavetes and his de facto repertory company achieved in contemporaneous films like Husbands and A Woman Under the Influence. In a recent retrospective review of the film, The Village Voice's J. Hoberman complains that Tyrrell is prone to "shameless face-pulls and drunken antics," but to these eyes, Tyrrell (like Gena Rowlands) has done an astonishing job of concealing the line between actress and character, making Oma a fascinating, even entertaining, and wholly convincing emotional cripple.

The whole film is highlighted by performances that don't feel like performances, just realistic human behavior. It helps that Huston often lets the spotlight shine on non-central characters, like Ruben the trainer and his assistant Babe (Art Aragon), whose fumbly interplay, marked by plenty of moments where they talk over each other and don't seem to be listening, makes them a comedy team of the highest order. Another example comes as Ernie psychs himself up in the locker room before a fight and Buford (Wayne Mahan), one of Ruben's other young boxers, delivers a wonderful speech about the power of positive thinking in regards to kicking ass; the punchline, of course, is that Ernie and Buford both fail to do the kicking and get their asses kicked instead during this particular event.

Another great tangent occurs when Billy runs out of employment options, and he ends up doing farm labor for a pittance. As Billy hoes the ground, he listens to one of the other workers tell a sad but funny story about how he lost his woman thanks to wine (he drank too much of it) and roses (he bought them for the woman across the hall). These tiny digressions inform the main characters somewhat, but more importantly they help create a world where everyone in every corner of the frame is a fully fleshed-out human.

Eventually, Billy manages to get himself back into the ring, pitted against a tough Mexican boxer named Lucero who could potentially snuff out Billy's comeback before it even starts. The resulting fight scene does not have the bravura style of Raging Bull, but that makes it no less visceral. Huston keeps the camera in tight on the fighters' faces and bodies as they beat the stuffing out of each other.

Fat City is a triumph of naturalistic acting, flavorful writing, subtle directing, and stylish low-key photography. It's a masterpiece from a master filmmaker. 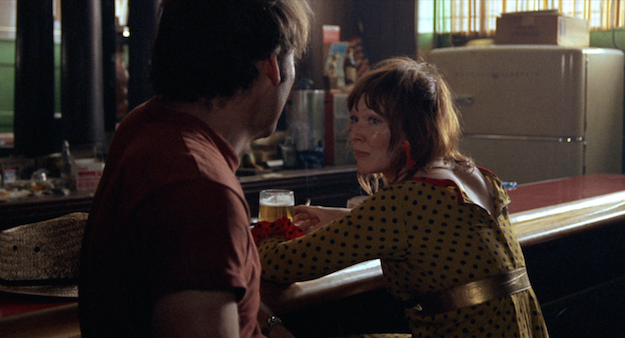 The Blu-ray
Fat City comes in a limited edition of 3000 copies. It is packaged with a color booklet, featuring an essay from Twilight Time's Julie Kirgo.

The Video:
Another gorgeous presentation (AVC-encoded 1080p 1.85:1) from the Sony vaults, taken from a new 4K restoration of the film. The color palette has a dusty, yellow-ish vibe to it, but skin tones typically look natural and the colors are rich and saturated. Nice deep blacks, especially when cinematographer Conrad Hall creates silhouettes. No crushing. Detail is excellent; you can see the beads of sweat forming and dripping off of Stacy Keach's face.

The Audio:
There are two options, a DTS-HD MA 5.1 surround remix and a DTS-HD MA 2.0 stereo track, which must also be a remix from the original mono (albeit subtle -- most of the sound is weighted to the middle, but I noted some directional effects when I re-watched a portion with headphones). The surround mix offers a more atmospheric approach, while the stereo is more focused and present. Both tracks are satisfying, with a solid overall response and no damage or distortion to distract. One subtitle option: English SDH.

- One of the better in-house commentaries from TT. Dobbs (screenwriter on films like Dark City and The Limey) is clearly a huge fan of the film, calling it the greatest boxing film ever made. That enthusiasm helps make this discussion quite entertaining as Dobbs and TT co-founder Redman explore a number of facets related to the making of the film, including how it compares to Leonard Gardner's original novel, Conrad Hall's too-dark-for-drive-ins shooting style, and Susan Tyrrell's bitter attitude to working on the film.

Final Thoughts:
A masterpiece from master filmmaker John Huston. The whole cast -- Stacy Keach, Jeff Bridges, Susan Tyrrell, Nicholas Colasanto, Candy Clark, and all the rest -- they turn in wonderful committed performances in this "picture from life's other side." This newly restored home presentation looks and sounds excellent. Juicier bonuses certainly would have been nice, but even with just the new scholarly commentary, this release makes it into the DVD Talk Collector Series. 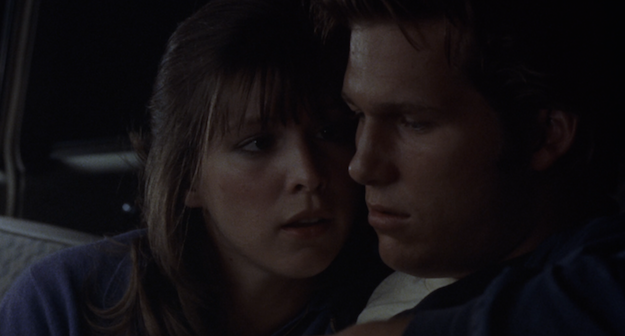