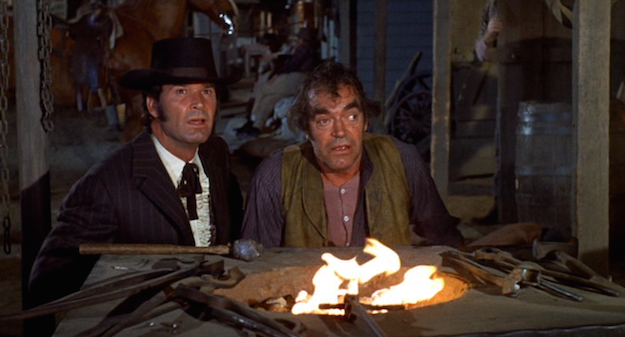 The 1969 Western comedy Support Your Local Sheriff didn't really need a sequel, and so, in an interesting move, Hollywood didn't give it one. Instead, two years later, star James Garner, director Burt Kennedy, and much of the supporting cast re-teamed for a totally different Western comedy that just happens to riff on the title of the earlier success. For this reviewer, Support Your Local Gunfighter improves upon its predecessor by going a little more ambitious with its storytelling and adding even more great character actors to the already strong established mix. (Of course, everyone doesn't have to agree with me: in his 1971 review, Roger Ebert grumbled about the film suffering from character actor overload and deemed Local Gunfighter "possibly the worst Western comedy of modern times.")

This time Garner plays con man and gigolo Latigo Smith who winds up in the town of Purgatory after hopping off a train to avoid getting married to one of his marks, a saloon keeper and madame called Goldie (The Killing's Marie Windsor). Little does Lat know, the town of Purgatory is expecting a gunfighter to get off that train. You see, supposedly there is a mother lode of gold in the middle of town, and two different factions are digging day and night from either end to be the first to claim it. One of the miners, Colonel Ames (John Dehner), drafted a telegram to infamous gunman Swifty Morgan to take out his competition. But his competition, Taylor Barton (a shoutier-than-usual Harry Morgan), found out about it and attempts to either waylay Swifty Morgan from his purpose or bribe him to join his side instead.

The script by Western veteran James Edward Grant clearly takes it basic premise by tweaking Yojimbo and A Fistful of Dollars, but the story goes off on enough fun subplots and tangents that it's not quite right to deem it a straight rip-off or parody. Lat's main goal in Purgatory is to find a doctor to remove the giant "I Love Goldie" tattoo on his chest and then be on his way. Sam Peckinpah regular Dub Taylor plays the Doc, who shiftily claims he can probably do the job for $500 if Lat will give him a few days to study up on the procedure. That's all well and good until Lat succumbs to his compulsion to bet all his dough on a roulette number (23 - a premonition of that Jim Carrey movie?) and loses 4600 bucks.

With the help of a newly minted sidekick, down-on-his-luck horseman Jug May (Jack Elam), Latigo seeks out a new saloon keeper/madame to help him refill his wallet. He settles upon Miss Jenny (Joan Blondell), who is smitten with his charms -- but smart enough not to let Lat into her purse (after all, she has experience with gold digging).

And that's certainly not the least of his troubles. Since most of the town assumes he's Swifty Morgan, he has to fend off comers who want to keep him from killing Taylor Barton. In the film's most oddly brutal (but undeniably funny) scene, Lat knocks out a young gunfighter who wants to shoot it out with him and then uses a small iron to break his trigger finger. After Lat does so, Jug May notes that the fellow actually appears to be left-handed, so he needs to do the other hand too.

Most intent upon saving Mr. Barton is his daughter, the inaptly named Patience (Suzanne Pleshette), who blasts up the town with a Winchester trying to kill Latigo but never seems to have taken the time to figure how to aim properly. Patience is a much more appealing variation on the strong-willed daughter character first attempted in Support Your Local Sheriff, and Pleshette is also a far more charming and funny love interest for James Garner to play off of.

Eventually, the story concerns Latigo conning Mr. Barton for the money he lost on roulette by claiming Jug May is the real Swifty Morgan, who will protect him. But then Colonel Ames sends for the real real Swifty Morgan to kill this imposter, and it all hits the fan. Chuck Connors (The Rifleman) makes a hilarious unbilled appearance as the cold-blooded Morgan, which is almost enough to forgive the climax of the film for being too over-the-top and slapdash.

Support Your Local Gunfighter has the same goofy appeal as the prior team-up of James Garner and this cast and crew, but I still give this later one a slight edge. Maybe it's because everyone had figured out their chemistry and settled into a nice working groove. Maybe it's because the flick didn't feel as much like a TV western as much the first one did. Maybe it's just because I laughed more. Whatever the reason, Support Your Local Gunfighter is a rootin' tootin' fun time I highly recommend. 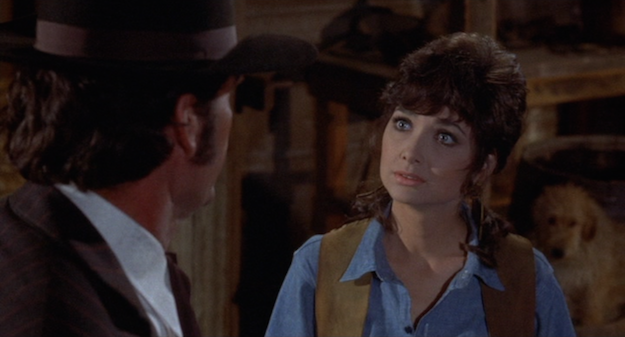 The Video:
Much like the Support Your Local Sheriff disc, this widescreen 1.85:1 transfer looks quite good, with minimal noise and digital compression issues. Colors are strong and saturated, although maybe a little less life-like (a lot of orange complexions, it seems), and the many night scenes are highlighted by strong blacks with good shadow detail and no crushing. The Blu-ray version is scheduled for February, and if it uses the same master as this presentation, it'll be worth the wait, but if you're not an HD obsessive, this is a worthwhile presentation.

The Audio:
Once again, there's a problem-free Dolby 2.0 mono audio offering that nicely serves the dialogue, effects, and music. And fortunately, the score by Jack Elliott and Allyn Ferguson is not so silly as the one in the previous film. There's an optional English subtitles track that sadly sometimes just provides the gist of the spoken dialogue. Apparently the transcriber didn't think it was worth it to keep writing the whole phrase, "Miss Hunter's College on the Hudson River, New York, For Young Ladies of Good Families."

Special Features:
The same batch of trailers as the Sheriff disc: Support Your Local Sheriff, this film, James Garner in Duel at Diablo, and Young Billy Young directed by Burt Kennedy.

Final Thoughts:
It's nice to see James Garner and Jack Elam teamed up again, this time essentially playing the inverse of the sharpshooting lawmen they played in Support Your Local Sheriff. It's also nice to see so many of the supporting and bit players from that earlier film return again too. It must have been a heck of a lot of fun to make these movies, and it shows. There's an easy good-time charm that radiates from the screen and makes viewers feel like we're all just having a bit of fun together. Gunfighter benefits from having a slightly more ambitious script and a more stylish look than the first movie, and so, I must duly up my standard recommendation on Sheriff. Highly Recommended. 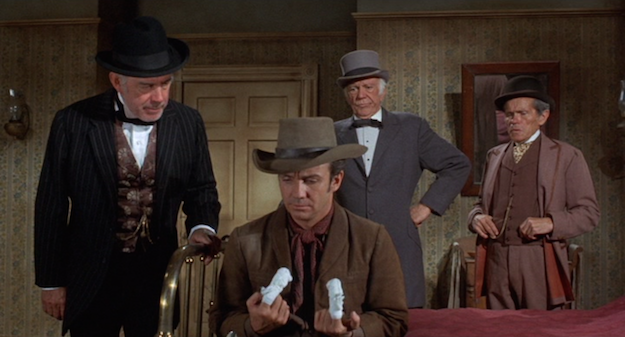