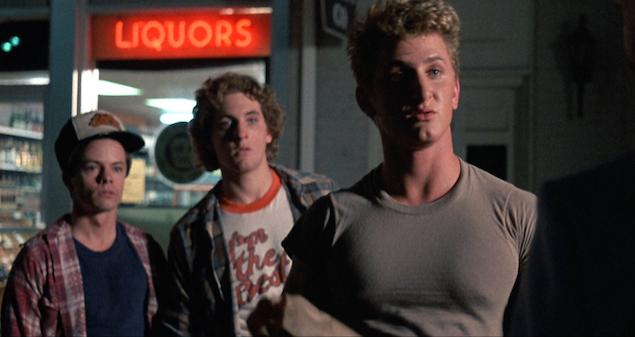 Sean Penn and Christopher Walken headline the 1986 slow-burn crime drama At Close Range, inspired by real-life rural Pennsylvania crime boss Bruce Johnston and his estranged son. Screenwriter Nicholas Kazan (who made the underrated and largely forgotten Dream Lover) and director James Foley (Glengarry Glen Ross) focus the film on the son, played by Penn and here renamed Brad Whitewood, Jr. In the film, the younger Whitewood's yearning to fill the father-sized gap in his life is relatable but ends up leading to a series of tragedies.

When the long-absent Brad Sr. (Walken) wanders into the living room of his ex-wife's house out of the blue, he comes offering money for the woman he's ignored for so long, but he also offers the implicit possibility for his teenage sons to get to know him. (Sean Penn's real younger brother Chris plays his on-screen younger brother Tommy.) The younger Brad has heard that his father is a thief, but it doesn't bother him. When Brad sees the surrogate family that his father has created with his small band of heisting buddies, he immediately wants to be a part of it. Brad Sr. is uneasy about letting this boy join his gang, but he decides to see if he has what it takes to make them all some money.

While watching this film, I vacillated on whether or not I thought Christopher Walken was miscast as Brad Sr. Walken, being Walken, is consistently off-kilter and always vaguely malevolent. It was hard for me to completely buy that Sean Penn's character would be so successfully seduced into the world of his father, because his father is hardly ingratiating. On the other hand, I'm sure there's an argument to be made that Walken's behavior could be read by his son as aloofness, which might just make Brad Jr. want to earn his love and respect that much harder. Later, when the teenage Brad realizes that his father is more than just a wildly successful thief and is in fact a cold-blooded Machiavellian kingpin, it tracks logically that this detached man would be capable of such viciousness but it seems like Walken isn't just hinting at this aspect of his character in earlier scenes, he is telegraphing it at all times.

Penn delivers another magnetic, soulful performance, as a kid who is fairly wild and tough but who constantly tries to appear even tougher than he is. There's always vulnerability mixed up in everything his character does, which is allowed to fully come to the surface in a sketchy but still touching romantic subplot with a baby-faced Mary Stuart Masterson.

The final act of the film, in which it becomes clear that Penn and Walken's characters cannot coexist peaceably in the world, is downright electrifying. A Grand Jury has started subpoenaing witnesses to testify against their boss, and so an enraged Brad Sr. methodically sets the wheels in motion to put the kibosh on the DA's case. People start ending up dead, and it seems inevitable that Brad Jr. is coming up on the list. The eventual face-to-face confrontation between the two of them, with Jr. pointing what he derisively calls "the family gun" at his father, is so powerful that it makes it easier to forgive and forget some of the narrative's sagging momentum during the middle.

Although At Close Range is pretty much entirely Penn and Walken's show, the periphery is impeccably cast with both veterans (Millie Perkins, Eileen Ryan [the Penns' real-life mother, playing their grandmother], Candy Clark, and Tracey Walter) and then-newcomers (Crispin Glover, Kiefer Sutherland, and David Strathairn). The story takes a little too long getting to the dramatic goods, but the performances are consistently excellent from top to bottom along the way.

The Blu-ray
At Close Range comes in a limited edition of 3000 copies. It comes with a color booklet, featuring an essay by Twilight Time's Julie Kirgo. The booklet in the review copy features printing that is a bit too indistinct to make out Kirgo's words, but reportedly all orders of the disc are now accompanied with replacement booklets featuring clearer text.

The Video:
TT presents a solid AVC-encoded 1080p 2.35:1 transfer with strong detail and an appealing film grain structure. Overall, the image is clean and stable, with no distracting compression artifacts. Color is strong and lifelike while the blacks are deep without crushing.

- An interesting, but not often scene-specific chat with director Foley that covers topics such as the process by which many of the players came to be involved with the project, the film's bungled theatrical release, Christopher Walken's tendency to forget lines, and Foley's more recent work on House of Cards.

Final Thoughts:
At Close Range is a great acting showcase that is hard to get fully invested in until all hell breaks loose in its final third. Christopher Walken is great, but maybe not a perfect fit for this particular role, while Sean Penn, at the height of his early stardom, oozes vulnerability and misguided toughness. If you haven't seen the film, but you like these actors, it's definitely worth a look. Recommended.