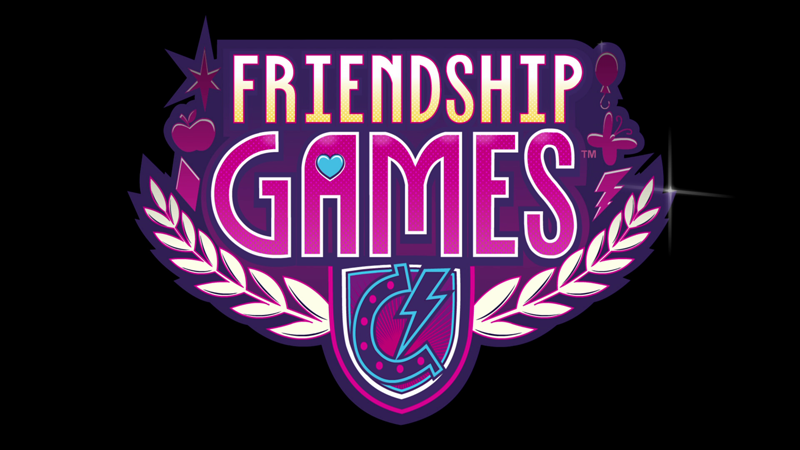 The Movie
Though I continue to protest that I am not a Bronie, I will not deny that the modern iteration of My Little Pony is very entertaining, managing to blend kids-show messaging with genuine entertainment. Despite the reality that the Equestria Girls off-shoot, with its teen humanoid versions of the show's characters, was without a doubt an attempt to extend the franchise from a kid audience to a tween/early teen audience via fashion dolls, through two movies, it's established itself as a worthy follow-up to the Friendship is Magic series, maintaining continuity with the characters and sense of humor. However, that's hardly a surprise, considering the widespread popularity the TV show has maintained across age demographics.

Here in the third film, we pick up where the second film ended, as the Equestria Girls version of Twilight Sparkle attempts to figure out how magic works in this non-pony universe. (For newcomers, Equestria Girls takes place in a parallel universe to the Friendship is Magic pony universe, with humanoid versions of pretty much all the TV series' recognizable characters [part of the film's fan-service appeal.]) The thing is, this Twilight Sparkle is not the one from the second film, but an entirely different version who attends snooty Crystal Prep and doesn't know Sunset Shimmer (an Equestria Girls-exclusive character) and the rest of the Mane Six (the core characters). Despite Pinkie Pie's breathless attempt, it doesn't feel like this concept is ever satisfactorily explained here (as in, where did this character come from?) which leads to a good deal of distracting confusion for much of the early going. Even my MLP-loving daughter couldn't explain it, though she did remember the post-credit scene from the second movie that led into this one (putting her one step ahead of me.) 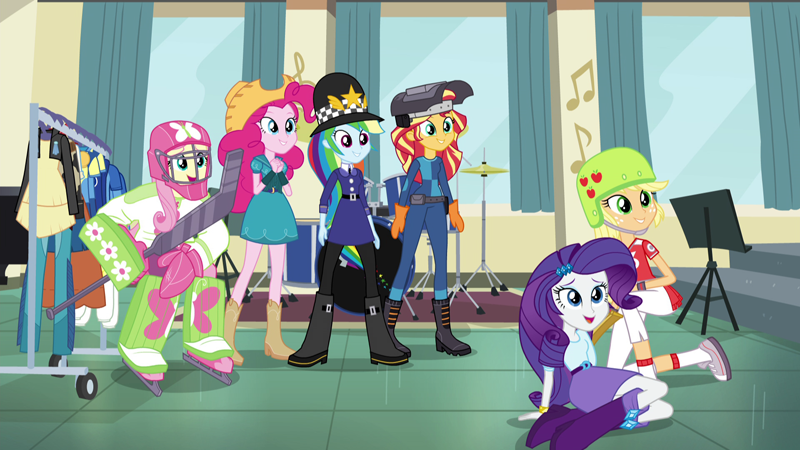 This film centers around Sci-Twi (as this alternate version is referred to by the filmmakers) and her attempts to learn about the magic that the girls discovered in the second film, an effect known as "pony-ing up", where they grow pony ears, a long mane and wings (if the pony character is a pegasus.) Sci-Twi's involvement with magic creates some problems for the main characters, leading to a massive, anime-inspired face-off in the end, which is one of the most exciting moments the franchise has ever featured. The animators really cut loose here, and the results are impressive, making one wonder if a more action-oriented MLP series could be ahead of these characters (and perhaps distracting you from questioning why these people are so accepting of magic suddenly being a part of this non-magical universe.)

While the magic and action are the core of the film, they are explored against a background of a school competition, as the main girls' school, Canterlot High, and Sci-Twi's Crystal Prep face off in the Friendship Games, a battle of academic and athletic abilities held every four years and dominated by the prep kids. The introduction of Crystal Prep allows for some fun, creating parallel characters for each of the main girls, including the hilarious Sugarcoat, who deadpans awful truths, mirroring Applejack's honesty, and the wildchild Lemon Zest, a less joyous, yet still as intense Pinkie Pie. The competition ultimately isn't that important, but getting to meet these alternate version of the main characters makes it worth it.

MLP has always been known for great music, and after the song-heavy Rainbow Rocks, the bar for catchy tunes was set rather high for this film, and unfortunately it doesn't clear it, mostly because, with less organic opportunities for singing, there are a lot less songs. The opening theme doesn't compare to that of the previous film, and one of the best songs in the film, "Right There in Front of Me" only plays over the end credits. There is one true highlight song, though, and that's Sci-Twi's Broadway-worthy ballad "What More is Out There?", where she laments her place in life. It's the kind of beautiful, wonderfully-structured song that sticks with you, and wouldn't be out of place next to a "Defying Gravity" or a "Let it Go." 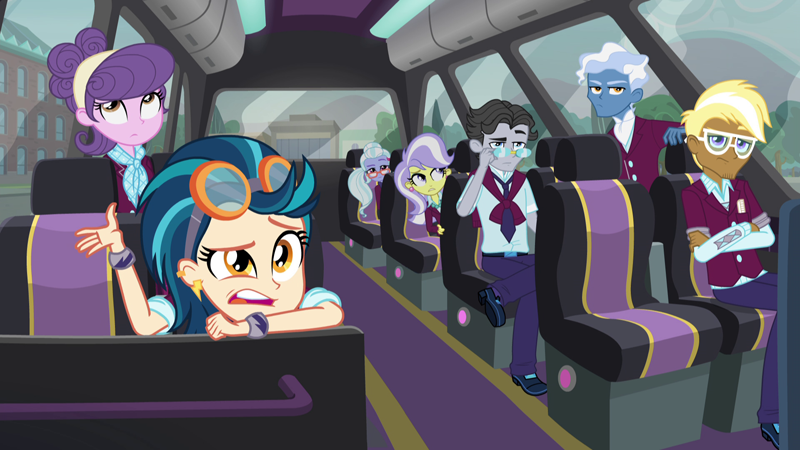 The Disc
This release arrives in a two-disc set (one Blu-ray, one DVD) packed into a standard Blu-ray keepcase with a sparkle-enhanced,l embossed slipcover that repeats the cover art. The disc's mildly animated menu offers a choice to watch the film, select scenes, adjust the setup and check out the special features. There are no audio options, but subtitles are available in English.

The Quality
As noted in my previous reviews, the current generation of My Little Pony, with its candy-color pallette is made for Blu-ray, and this film is no different, as the 1.78:1, 1080p, AVC-encoded transfer is just gorgeous, bursting with beautiful color and high detail, which gives a proper showcase for the impressive animation effort. Aided by the franchise's clean style, the look is so polished, with only the slightest edge pixelation, notable only along black lines, like Twilight's glasses. Otherwise, it's a wonderful looking disc.

The audio, delivered as a DTS-HD Master Audio 5.1 track, makes its biggest impression during the film's musical moments (natch), utilizing impressive separation between the channels (along with a light presence in the low-end) to create a room-filling sound that makes the more energetic numbers highly engaging. The surrounds are active throughout though, providing atmospherics for many scenes and enhancing sound effects, while the center channel handles the dialogue clearly and without distortion.

The Extras
The extras start with another feature-length audio commentary from Hasbro Studios Executive Director Brian Lenard, writer Josh Haber, songwriter Daniel Ingram, consulting director Jayson Thiessen, director Ishi Rudell and art director Rebecca Dart. The participants cover quite a bit of ground over the course of the film, in a track that will mainly appeal to animation fans, as they point out background details and discuss the production effort, including the challenges they faced in making the film and the ways they got around them. The energy and enthusiasm keeps the conversation flowing well, with no dead spots.

New this time around is a selection of deleted scenes, presented in animatics, which can be watched with optional commentary from Lenard, Haber, Ingram, Rudell, Thiessen and Dart. There are four scenes in all, running 9:13 in all, which together represent a storyline involving Sunset Shimmer, that was cut in the end, including an alternate ending. Thankfully, you can check it out here, because it featured a powerful duet version of the film's showcase song "What More is Out There?", which really deserved to be heard. The commentary does a fine job of explaining the whys of these scenes were created and excised.

Down from last film's eight shorts are the five included here, (which run a combined 12:01.) These mini-adventures, which star both core ponies and side characters, take place between scenes in the film, particularly one featuring the picture-taking (and oddly German) Photo Finish, whose activity in the film is explained by her short. Though the clips with lesser-seen characters are fun, it's hard to top "Pinkie Spy," which lets the boisterous Pinkie Pie go a little nuts alongside Rainbow Dash. Short and silly, these are well worth watching for any MLP fan.

Like last time, there's a trio of karaoke-style sing-alongs, for the songs "Friendship Games," "CHS Rally Song" and "What More is Out There?" (with a play-all option.) (Oddly, the song looped on the menu, "Right There In Front of Me", is not included.) Of the three, the Broadway-style "What More is Out There?" is the clear leader, though "CHS Rally Song" is a decent second-place finisher (while the opening titles' "Friendship Games" takes far too long to get going to be a sing-along choice.) 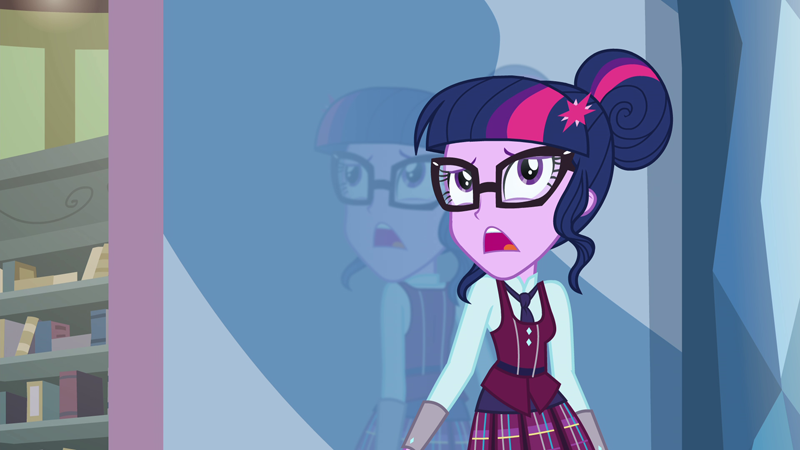 The Bottom Line
The second Equestria Girls film was a surprising experience for what seemed like a cash grab on Hasbro's part, offering a different, yet still entertaining take on the My Little Pony: Friendship is Magic characters. Though the plot is a touch confusing and the music less engaging overall (despite the presence of the excellent "What More is Out There?"), the third film keeps pace through quality animation, a fun sense of humor and an action-packed third act. The presentation is excellent all around, including a welcome amount of bonus content that's definitely not fluff. For fans of the ponies, it's a must-watch, while it's far from painful for those who have to watch it alongside younger fans.