I've gotta hand it to Criterion - they hit it out of the park when it comes to the cover art of their release of Bitter Rice, a gritty, spirited drama from Italian director Giuseppe De Santis. Done in the style of a pulpy vintage paperback, the Blu-ray's artwork depicts two beautiful babes pouting in a yellow ocher rice paddy. The 1949 film, an early effort from legendary producer Dino De Laurentiis, strikes the same balance implied in that alluring cover art - a stark, wholly Italian production caught between realism and delirious melodrama.

In exposing the terrible working conditions of a certain segment of Italy's poor population, Bitter Rice at least pays some lip service to the Italian Neorealist movement of the day. Mostly, however, it's pure, steamy melodrama filled with types familiar to film noir fans. With hardly any modifications, one can easily picture it as an overripe Warner Bros. production starring Ida Lupino and Dane Clark.

Taking place during the rice planting season in Northern Italy's Po Valley, Bitter Rice sympathetically follows the plight of dozens of women who make the annual pilgrimage to harvest the existing crops and deposit new plants (a job ideally suited for delicate female hands). Despite the back-breaking work and lousy pay, it attracts lots of different women - including one of the veterans, a vivacious young thing named Silvana (Silvana Mangano in a star-making performance). During the crowded train ride to the valley, Silvana befriends a new applicant - Francesca (American actress Doris Dowling) a jaded, dark-haired beauty. Francesca is on the lam for stealing jewelry from the wealthy woman for whom she worked as a maid, but only Silvana seems aware of her suspicious behavior.

Bitter Rice takes its time (perhaps too much so) establishing the characters and showing the camaraderie between Silvana, Francesca and the other rice pickers, who thrive despite the hardships they face. The film turns into full-tilt melodrama in the second half, when Francesca's snaky criminal boyfriend Walter (Vittorio Gassman) shows up and makes a move on the playful Silvana. Francesca becomes upset at Walter's blatant manipulation, although her jealousy subsides when she becomes drawn to Marco (Raf Vallone), a handsome officer from a neighboring Army training camp. For Marco, the feeling is mutual, although he's attracted to bodacious Silvana as well. The story plays out in a manner similar to what Hollywood was doing at the time, although Giuseppe De Santis guides it along in a fluid, compelling way with intriguing framing and set pieces. The tense showdown between the four main characters - taking place in the rice farm's meat storage room amidst steer heads, feet and other grotesque slabs of beef - makes for a tense, appropriately pulp-soaked climax.

Despite the central thrust of this film's storyline being the two leading ladies trying to out-maneuver themselves over the men, Bitter Rice ends up having a strikingly progressive outlook. The other rice field workers, including a matron with a baby and an idealistic, recently engaged girl, are finely etched and sympathetically portrayed - when the farm managers make conditions worse, they all band together in solidarity. One of the more memorable scenes involve the women, toiling in the rice paddies, airing their grievances through song (since they're not allowed to talk). The movie heavily trades in on the intensity of Dowling's slow-burning femme fatale and Mangano's va-va-voom appeal, but mostly what struck me was the natural, impressively smooth direction and carefully crafted set pieces - such as that singing-in-the-fields scene. Though it doesn't thoroughly hold together the way it should, the film sports enough solid drama to earn a recommendation. 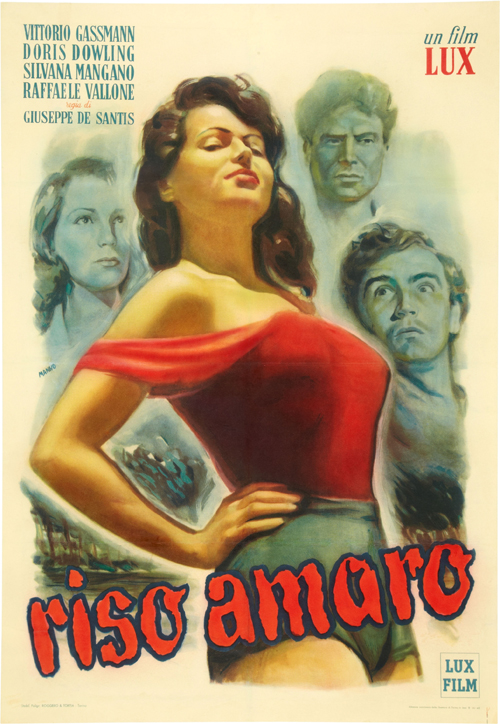 Bitter Rice is given a solid digitally restored visual presentation in the original 1.33:1 aspect ratio. The black and white photography tends to look a little blown-out at the lighter end of the spectrum, but mostly it's a beautifully done restoration that brings out a nice amount of detail and texture. While a few specks of dirt show up occasionally, the stable, clean presentation is on par with other comprehensively restored films of this era in the Criterion catalog.

The mono soundtrack is presented in an adequate mix with some distortion during the film's louder passages. For the most part, the dialogue is clean and unobtrusive. Optional English language subtitles are provided as the default.

Surprisingly for Criterion, there are only a couple of notable extras on this release, both rather cursory additions. A 2008 documentary from screenwriter Carlo Lizzani, Guissepe De Santis (52:33) offers an admiring, comprehensive overview of this overlooked director's career and his later efforts in mentoring other filmmakers, while Carlo Lizzani (6:38) has the screenwriter supplying some background on this specific film in an archival interview from 2002. The disc also includes the film's torrid, spoileriffic Theatrical Trailer (3:23). Criterion's nice packaging contains an essay by critic Pasquale Iannone in the booklet. In addition to that juicy package cover, the booklet folds out to an 8-panel piece of original art by illustrator Ken Laager highlighting actress Silvana Mangano in a sexy, Jane Russell-esque pose.

Bitter Rice pits a jewel thief on the run against dozens of female farm workers arduously harvesting a rice crop - including the jaded femme fatale who once loved him and a curvy, vivacious innocent. Kind of a lesser film in the Criterion Collection, yet this pulpy, enjoyable Italian Neorealist drama is a most welcome addition to their catalog. Recommended.