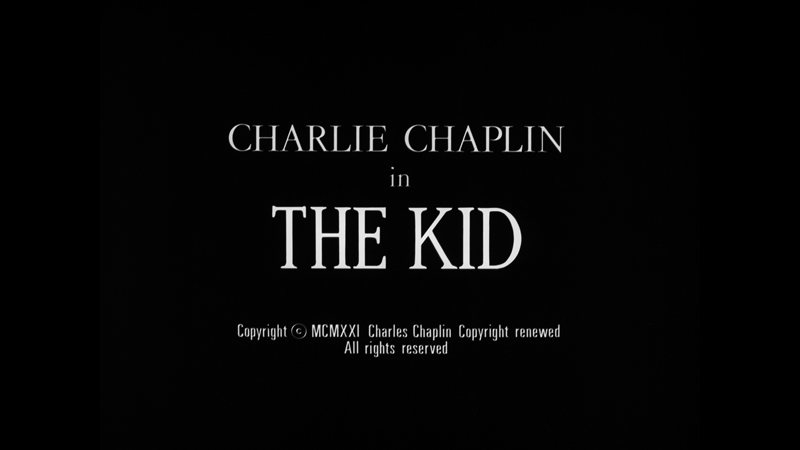 
The Movie
After making his career in short films, Charlie Chaplin decided he want to make a feature-length film, or, at just over 60 minutes, what passed for s feature-length film at the time. The resulting movie--The Kid--isn't the comedy most would recognize Chaplin for, even if it does star his classic character, The Tramp, with his dark, short moustache, his bamboo cane and his ill-fitting clothes. Rather, The Kid is a far more emotional story between a child and his surrogate father, two underdogs facing a cruel world together.That's not to say there isn't some comedy, as Chaplin didn't abandon his fans, but laughs definitely take a back seat to drama.

An unmarried woman (Chaplin's frequent co-star Edna Purviance) shamefully gives birth to a child out of wedlock after being left by the child's father, and decides to abandon the newborn in an alley. It's then that the Tramp comes across the child, and takes it in, raising it for five years (which pass in an intertitle.) At this point, Jackie Coogan, in his career-establishing role, takes over, becoming the Tramp's partner-in-crime, literally, as the adorable John breaks windows, and the Tramp comes along to make money by fixing them. Things are going well until the law gets involved, and eventually the twosome are on the run from authorities who want to take the child from the only love he's ever known. 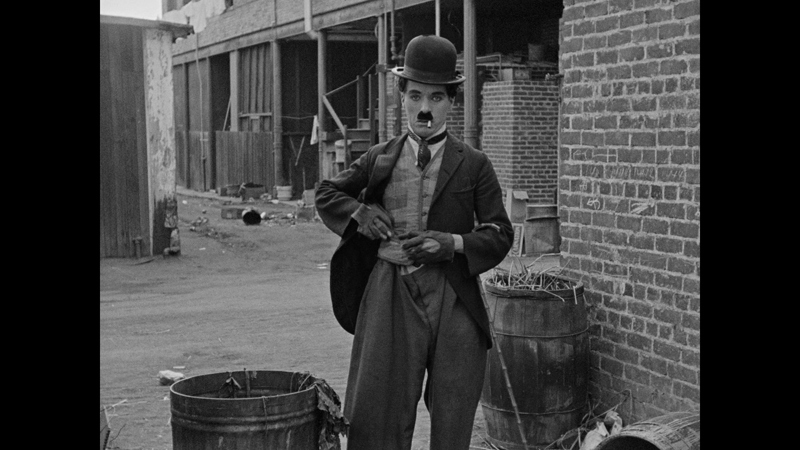 The relationship between John and the Tramp is obviously the core of the film, though the mother eventually re-enters the picture, after life takes her in a very different direction. Without a word, and thanks largely to young Coogan's incredibly emotive performance, the audience gets a true feel for what these two outcasts share, while their adventures, including a run-in with the police and a scrap with local toughs, help avoid an overabundance of sentimentality. Any comedic moment featuring Coogan, like his reaction to a run-in with a police officer, is just proof that he was otherworldly in terms of his screen presence, adorable yet knowing, the kind of precocious child star that's cute yet not cloying.

As cute as The Kid could be in depicting life with John and the Tramp, a scene in which the duo are threatened with separation is one of the most heart-wrenching moments involving a child ever captured to film, with Coogan's silent, plaintive wailing juxtaposed against Chaplin's crushed expression, which, considering the rest of the content of the scene, only serves to show how much the boy makes up his world. Until this point, one could likely consider this movie a sentimental comedy, but once you reach this part, it's clear this movie is all about love and loss.

The version presented here is Chaplin's 1972 reissue, which was cut down to 52 minutes (removing only moments with Purvience, putting the focus more directly on the Tramp), leaving the film even shorter, but what is there is memorable, including some well-choreographed fight scenes and a rooftop chase scene. The only misstep, and it's a subjective call, is a dream sequence involving angels and devils, which just tips the scales in terms of the treacle, as it has no real effect on the plot, nor is there anything particularly interesting about it, outside of the trivia that it features a 12-year-old Lita Grey as a flirting angel. Grey would, a few years later, marry Chaplin and become his second wife. (So...yeah...that happened.) 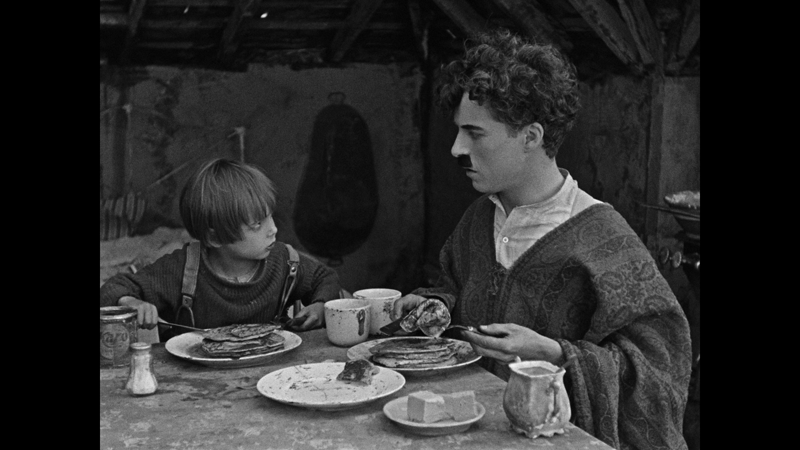 The Disc
The Kid arrives as one Blu-ray disc Criterion's standard clear Blu-ray-height keepcase with an attractive two-sided cover and a 12-page fold-out pamphlet. The minimalist Criterion menu gives the choice to watch the film, navigate the timeline, select scenes, adjust the set-up and check out the special features. There are no audio options nor any subtitles or closed captioning (obviously.)

The Quality
AThe Kid arrives with a 1080p, AVC-encoded 1.33:1 transfer (with pillar-boxing), which was struck from a 4k scan of a 35mm 1921 print (with added material required for a restoration.) Interestingly, this newly-restored scan was then edited to match Chaplin's 1972 cut. Simply put, the film looks fantastic. Clarity and fine detail are both exceedingly high, to the point that there is an early close-up of the Tramp's gloves and vest that looks like it was shot with a RED camera last week. Meanwhile, black levels are excellent, resulting in great contrast throughout the film. After noticing several bits of damage in City Lights, nothing caught the eye this time around. A thoroughly gorgeous presentation.

The PCM 1.0 audio is crisp, yet not artificially full-sounding, and is free of any noticeable defects. The music, which plays a key role in establishing the film's tone, sounds terrific.

The Extras
The extras kick off with a solid new commentary by Chaplin historian Charles Maland. It's more of an academic audio essay, as he is obviously reading from a prepared script, but he offers a great deal of insight on Chaplin, placing the film into the context of his career, while providing background on the actors and touching on techniques used and themes seen in the movie. While the energy could be higher, there's not denying it's an informative track.

Four interviews are included, a mix of archival clips, featuring chats with Jackie Coogan (11:04), Lita Grey Chaplin (9:59), cinematographer Rollie Totheroh (7:40) and film distributor Mo Rothman (9:41). Coogan's, taken from a 1980 British interview, is the most substantial, focusing on his work with Chaplin and his experience on The Kid, while Chaplin's 1993 appearance centers around her personal relationship with Chaplin. Totheroh and Rothman (both in audio interviews) however offer the most interesting info through, with Totheroh talking about the effect of Chaplin's divorce on the production of the film, while Rothman offers his honest perspective on Chaplin the man. Between the four, you get a full spectrum of Chaplin insight.

"Jackie Coogan: The First Child Star" (19:08), an extensive video essay by Chaplin expert Lisa Haven, delivers a comprehensive overview of the man's career, from child star to his work on The Addams Family, naturally putting a spotlight on his childhood, including the controversial story of his family, which is a tale unto itself.

For a cinephile, "A Study in Undercranking" (25:09) might be the most interesting extra on this disc, as silent-film expert Ben Model breaks down the importance of the relationship between filming speed and projection speed when it comes to silent comedies. Using examples from Chaplin's films, as well as the work of Harold Lloyd and Buster Keaton, he shows how the three silent-film icons relied on film speed to accomplish their best-known gags. It's a class in silent filming that's presented efficiently and effectively.

"Chaplin Conducts The Kid" (2:03) is a brief look at an elderly Chaplin at the helm during a recording session for the score of the 1972 reissue of The Kid. The sense of humor is still there as he jokes with the orchestra.

Though three scenes were cut from the film in order to match the 1972 version of the movie, they are included here in the section "From the 1921 Version." The three scenes, which run 7:21, feature Purviance, as she sees an unhappy bride at a wedding (and is included in some heavy-handed religious iconography), holds a baby and meets the father of her baby once again. Chaplin's changes make sense when watching these moments, as the woman just isn't that interesting a character, despite this additional screen time. The scenes are presented with a few moments from before and after the scene, so as to provide some context. Also here are the film's original opening titles, intertitles and closing card, which are presented alongside the 1972 versions, for comparison's sake.

A 1921 newsreel, "‘Charlie' on the Ocean" (3:59), follows Chaplin as he returns to Europe via ship. The best part of the piece is the reception he receives back home, as he's mobbed to a ridiculous extreme, giving you a real idea of how popular he was.

The 1922 Tramp short, Nice and Friendly (10:52), features Chaplin and Coogan, and is one of the weirdest all around. Created as a gift for Lord and Lady Mountbatten and filmed at Pickfair, the home of Douglas Fairbanks and Mary Pickford, it's an odd story in which the Tramp becomes a kind of assassin. It's far from Chaplin's best work, but as a curiosity, it's worth a look.

Wrapping up the on-disc content is a set of three trailers for the 1972 reissue of the film, from the US, Germany and the Netherlands (8:20). The best of the bunch is the Dutch version, which is practicaly sarcastic in how it presents the film. ,p> As is the norm for Criterion, the 12-page insert in the package includes info about the film and the disc, as well as an essay by film scholar and author Tom Gunning, which discusses how Chaplin mined sadness for comedy. The insert is illustrated with production stills. 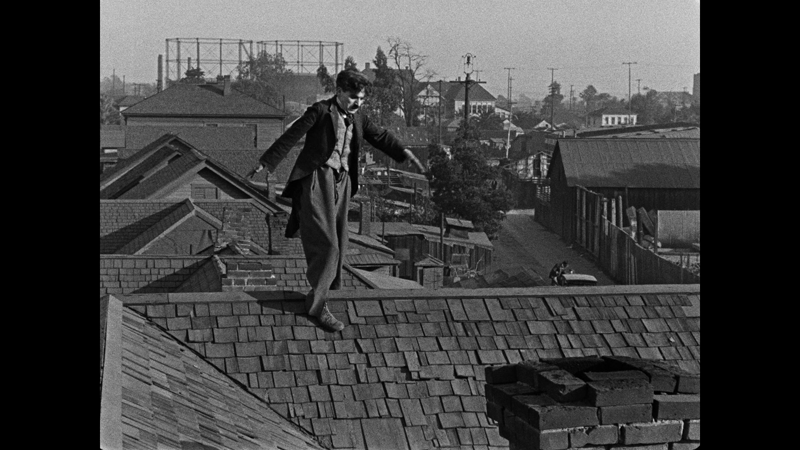 The Bottom Line
Call it beginner's luck, but Chaplin's first attempt at creating a feature film resulted in what's arguably his best and most complete movie, as he mixed his trademark comedy with affecting emotion, aided by a`tremendous performance by Coogan. Criterion has set the film up with a beautiful presentation and a wealth of bonus content that is as informative as it is entertaining. For fans, it's a great celebration of an icon, while those unfamiliar with his work can get an education in one convenient package.