The Film
Parody is a hard film genre to do on the cheap. You might be able to get away with parodying a Clerks or a Pi, which were low-budget flicks themselves, but trying to parody a James Bond film on an indie crowdfund budget is asking for trouble, as it's almost impossible to deliver the production value you need to portray the world of glitz and glamour a secret agent moves in. If you can't do that, your parody is already behind the eightball, and you better have all the other pieces just perfect.

Well, that doesn't happen with Spyfall.

Canadian filmmaker Brett Kelly (the prolific force behind a slew of films that fall on the low end of IMDB's 10-star scale), obviously a fan of 007's adventures, set out to make an Airplane-style secret-agent parody, armed with just over $3,000 in Indiegogo backing. The results are not hugely impressive. Lighting is iffy, cameras shake, special effects are more "special" than Kelly would likely prefer. He is not without some filmmaking skill. He's just not up to the task of parodying a Bond film, and neither is the script nor the performances. From the first line of the film, wordplay is aggressive to the point of annoyance, while jokes are cheap and any laughs that might occur are unearned. Here's an example of the dialogue that's emblematic of the problem with this film:

MIKE
I have a room reservation for Mike Hawk.

ELDERLY WOMAN
That's disgusting!
HOTEL CLERK
Is that your bag?

Mike looks at the elderly woman.

MIKE
No, I've never seen that woman in my life. 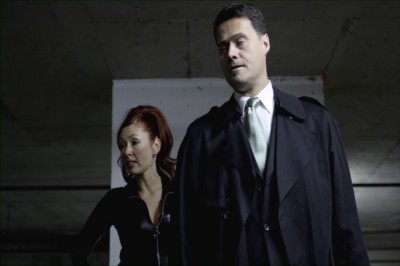 The film follows Mike Hawk (seriously?) and Agent 3.14159 (Agent Pi, get it?) as they attempt to take down a bad guy named Dixon, who runs a cider empire (I mean, come on, is this written by 6th graders?) The usual Bond trademarks are weakly parodied, including a busty femme fatale named Eva Stoppenfromfloppen (sigh), a letter-named support staff and a thug who throws his fake hand as a weapon. Occasionally a gag will be amusing, but they are few and far between. After a short while into this brief 78-minute film, caring about the story took a backseat to being bugged by the ham-fisted dialogue and noting the low-budget trappings, so whether the plot makes any sense isn't something I can honestly speak to.

Though the two lead agents (particularly Sacha Gabriel, who plays Pi) are competent in their roles and the support staff is rather solid, there are some stunningly bad performances in this film, certainly not aided by the script. There are two characters who are supposed to be more intelligent than your average cronies and thus speak with an enhanced vocabulary. Instead, they sound like a couple of guys struggling with the English language. Sure it's somewhat unfair to single this out, but when so much of this film falls short, every bump in the road starts to become amplified. At least the Adele-alike theme song and Bond-style opening titles are solid. 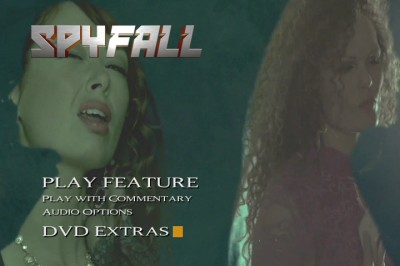 The DVD
The film arrives on one DVD, which is packed in a standard keepcase. The disc features an animated, anamorphic widescreen menu with options to play the film, adjust the audio and check out the extras. Audio options include English Dolby Digital 5.1 and 2.0 tracks, but no subtitles are included.

The Quality
Inconsistent is the best way to describe the anamorphic widescreen transfer on this disc. Sometimes, it looks great, with a high level of fine detail and rich color, with some shots featuring Pi's red hair looking no different than any studio film. But then, you'll get shots that are soft or shots that are dull and you start to be distracted by the visuals (we won't even talk about the special effects shots.) Black levels are never particularly good, usually looking more like dark gray, while aliasing is almost a constant issue, with noticeable pixelation along any hard edges.

The Dolby Digital 5.1 track is a better element, with dialogue and most sound effects pushed through the center channel, while the surrounds handle the score and soundtrack, as well as some minor atmospheric effects. Though the recording could use some improvement to boost the consistency of dialogue volume, overall the sound is clear and easily understood, without distortion. The low-end is barely present, only noticed during some of the music in the film.

The Extras
There are a few extras to check out here, though the value is questionable. Up first is a commentary with director Brett Kelly and producer Anne-Marie Frigon, recorded at home while their children sleep (though one is sick, requiring Frigon to miss most of the commentary.) The track is a low-key affair, without the energy you'd hope for as Kelly points out the influences for scenes in the film, explains some jokes and shares some production information. For an indie film, you hope for more how-it's-made info, and there's just not enough there to overcome the low-energy feel.

A six-minute blooper reel is available, though nothing really stands out about these flubs. Also included on this disc is a "trailers vault" with 10 previews of other films distributed by Camp Motion Pictures. Most of them look like C-grade flicks, notable only for either potential nudity or gore, though another of Kelly's films, the musical My Fair Zombie, looks interesting. 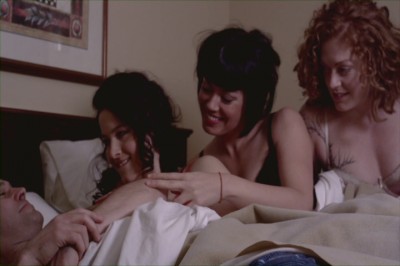 The Bottom Line
It never feels good to slam a truly independent film, because lots of work goes into it from people who aren't getting rich, but Spyfall just isn't good. The jokes are cheesy, the story is boring, the performances are mediocre and the production value is minimal. The presentation is decent and the extras, though welcome, aren't really worth the time to watch them. But hey, Kelly can say he's made an award-winning movie, so he's one step ahead of most people. It's just not a movie many would choose to watch.