Fatherland (aka Singing the Blues in Red) 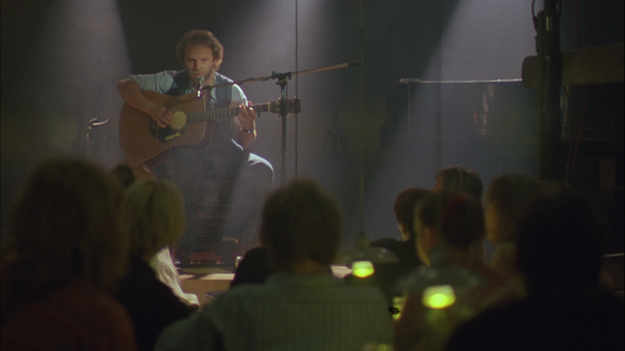 With this new Blu-ray of Fatherland (originally released in the U.S. as Singing the Blues in Red), Twilight Time continues their run of Ken Loach reissues, which previously included a Riff-Raff / Raining Stones double feature and Carla's Song. This 1986 film is a mild change of pace; director Loach is still in his familiar social realist mode, but this time he's not focusing on working class Britain. Instead, he turns his attention here to Berlin, then still divided by The Wall.

Singer-songwriter Gerulf Pannach appears as (one presumes) a fictionalized version of himself: an East German protest singer named Klaus Drittemann whose aversion to authority gets him expelled to the West (Pannach himself was expelled from the GDR [East Germany] in 1977). The first act of the film establishes exactly what Klaus is leaving behind, both the good and the bad. He leaves behind a wife and young son, much as his father -- also an outspoken folk singer -- did a few decades before. He leaves behind a concerned mother and stepfather who don't understand why he won't just bend a little for the government. He leaves behind surveillance by Stasi agents.

The irony, of course, is that once Klaus crosses over to the other side, he notices he is being followed by different agents (maybe the CIA?). He is also confronted with the knowledge that his music is not only appreciated in the West, but that it has money-making potential. Once he has crossed to the other side of the wall, Klaus is greeted by a record company rep (Heroes' Cristine Rose), looking to wine, dine, and sign Klaus to their label. As he tells his record company suitors, Klaus is not used to being a "commodity" that is sold to the public, so he takes time to ponder his future in capitalism.

In all honesty, this whole thread about Klaus's maintenance of artistic integrity, first in the face of government pressure in East Berlin and then in the face of commercial pressure after he is in "free society," is the most boring aspect of the film. There is some cleverness in the idea that Klaus prefers the oppression of the Stasi in some ways because at least it's more honest than the hypocrites he encounters in the West, but that point can be made much more quickly than this sometimes leisurely paced film makes it.

In fact, the film crystallizes its point in one short sequence of scenes. At a record company party, Klaus watches the debut of a new music video directed by a fellow exile from the GDR, Rainer (Hans Peter Hallwachs). The clip is a decadent assemblage of gaudy fashion and bare breasts being fondled. Later, Klaus quietly watches as Rainer drinks himself into oblivion and recites the lyrics of Randy Newman's "Guilty" to his gay lover. Nothing is explicitly stated, but viewers are left with the clear impression that Rainer is depressed about selling out. This short sequence deftly illustrates its point more eloquently than any number of the film's more drawn-out ruminations on art-versus-commerce. (It doesn't help that Pannach plays Klaus as relentlessly self-serious and severe, which frequently makes his extended time onscreen less pleasant than it is intended to be.)

Fatherland is much more interesting when it deals with Klaus's search for his father. The record company hooks up our hero with a French journalist, Emma (Fabienne Babe), who thinks she has tracked down Klaus's old man. Gradually, the puzzle pieces start to fall into place, revealing exactly why Klaus's father disappeared from the limelight after he left East Berlin, and why he might now be living in England under an assumed name. When Klaus finally drops in on his father (Sigfrit Steiner), their dialogue touches on the themes of idealism that have permeated the rest of the film, but the sequence works because of the human relationships at stake. Steiner's performance is so believable, invested with palpable weariness and barely concealed heartache, that we immediately know more about his character than this man probably would want revealed. Pannach's severity also works far better here, as his bitterness seems totally logical when confronted with the reality of a man he has pictured differently in his head for decades.

There are many striking moments in Fatherland and a few unintentionally silly ones. Klaus is haunted by symbol-laden black-and-white dreams about his father -- and, like, capitalism -- that are nicely shot by cienmatographer Chris Menges (Angel) but that play out like third-rate knockoffs of Wild Strawberries.

The slower-paced sections of this film are not completely without merit, since many of the performances in the early scenes are warm and ingratiating. I maintain, however, that the script by Trevor Griffiths (Reds) doesn't really start to say anything unusual and exciting until we're nearly smack in the middle of the story. It's really a shame too, because the final passages of the film are absolutely riveting. For that reason alone, I recommend Fatherland, even if I wish the film spent more time on its characters' personal relationships than it does on its characters' relationships to power and control. 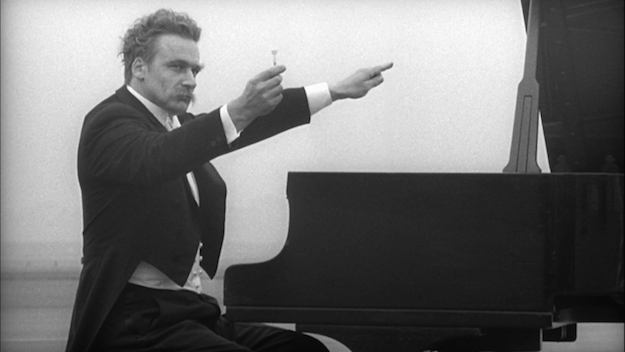 The Blu-ray
Fatherland comes in a limited edition of 3000 copies. The disc is accompanied by a color booklet featuring an essay by Twilight Time's Julie Kirgo.

The Video:
As with most of these Ken Loach reissues, this AVC-encoded 1080p 1.78:1 presentation is quite good. The image is stable with almost no dirt or speckling. Colors are slightly muted, but not washed-out. Detail is a touch inconsistent, but strong overall.

The Audio:
The DTS-HD MA 2.0 stereo is clean and vibrant. The dialogue, which is a mixture of English and German (with burned-in English subtitles during the German dialogue), is typically clear, although sometimes the actors' heavy German and French accents make it a little tough to make out the English dialogue (making the lack of a consistent English SDH track a bummer). 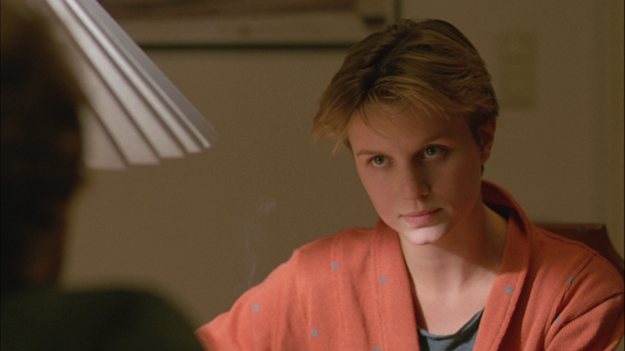