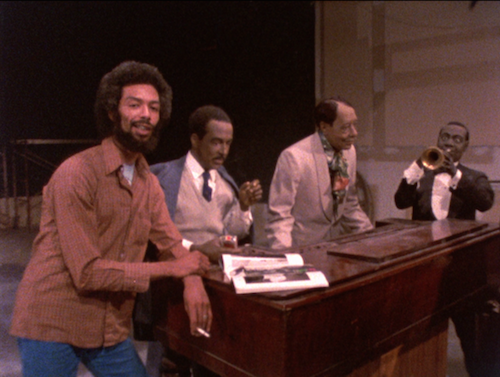 Gil Scott-Heron (1949-2011) was a politically conscious poet, songwriter, singer, and musician, who talked about the black experience in America with a mix of streetwise plainness and otherworldly transcendence. He is known to current music fans (if at all) for his swan-song collaboration with producer-of-the-moment Jamie XX, and maybe as the coiner of the phrase "The Revolution Will Not Be Televised," in his song of the same name. The way he blended cleverly phrased spoken passages and sung verses is often credited with helping to pave the way for hip-hop music.

The newly remastered 1982 documentary Black Wax captures Scott-Heron in various types of performance, mostly during a show at Washington, D.C.'s Wax Museum Nightclub. Backed by a full funk band led by madman bassist Robert Gordon, Scott-Heron performs a bunch of then-new tunes and some older classics, running the stylistic gamut from the syncopated reggae of "Storm Music" to the salsa-inflected "Alien," before ending on a ten-minute-plus word-jazz takedown of Ronald Reagan called " 'B' Movie."

The film's director, music documentary specialist Robert Mugge, also intercuts the concert footage with clips of Scott-Heron walking around Washington, talking about the disparity between the average American's perceptions of D.C. and the reality facing the people who actually live there. He performs poems in locales similar to the ones that inspired them years ago. Sporadically, we are treated to Scott-Heron walking through neighborhoods with a ghetto blaster on his shoulder, singing along to his recorded lament for/tribute to the city, "Washington, D.C."

There are no talking-head interviews in the film, just the songs, the poems, and a stream-of-consciousness monologue that just flows freely from Scott-Heron at all times. We get a little bit of Scott-Heron's biography -- and a lot of his philosophy -- through his on-stage banter and direct-to-camera addresses. As a raconteur, he is smooth, wise, and often funny. A particular highlight is when he talks about his initial exposure to poetry, and how he and his peers figured it "must be deep," because it made no sense to them. If Mugge had nixed the music aspect altogether, one could conceive of Scott-Heron filling up an entire feature film with his own Spalding Gray-type narrative monologues.

As a portrait of an artist, Black Wax is nicely evocative, even if it never presents Gil Scott-Heron out of performance mode. As a concert film, it is well-mounted, with some semi-flashy early Steadicam work. As a document, it is surprisingly essential. Fans and neophytes alike need to take notice. 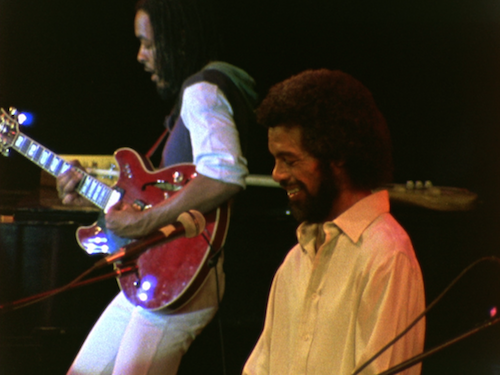 The Video:
Shot on 16mm, this film looks pretty good in this new AVC-encoded 1080p 1.33:1 transfer. Some dirt and speckles remain, but the image is mostly clean and stable. The level of fine detail is only okay, but presumably this is partially to do with the source material. Not much shadow detail either, but no major crushing in the blacks or other distracting digital noise. Colors aren't jaw-droppingly vibrant, but they are decently saturated and look far more accurate than the footage used in the bonus feature (see below).

The Audio:
The LPCM 2.0 stereo mix sounds a little bit dated, but bears no discernible damage or degradation. The band certainly sounds good in the concert scenes, with effective separation between instruments. No subtitles.

Special Features:
Dubbed an "afterthought" in its credits, the short film Is That Jazz? (HD, 9:17) is a concert outtake that includes some nice solo features from the band. (The clip actually plays directly after the main program without having to go to any bonus menus.) Unfortunately, the sound and picture here are not as strong as the main feature. The print used as a source seems to have gone red with age, and there has been no attempt to digitally correct this. Meanwhile, the sound has a subtle wow-and-flutter that most noticeably impacts the percussion. Overall, this clip is a worthwhile addition, but it would have been nice to have it remastered to the same standard as the feature.

Final Thoughts:
An energetic performance film featuring the late, great Gil Scott-Heron. Anyone looking for insight into the poet-songwriter's private life might be slightly disappointed, but as an inventively structured glimpse at his estimable creativity and intelligence, this is a must-see. Highly Recommended. 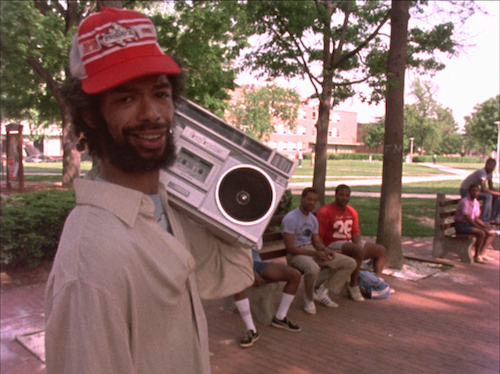