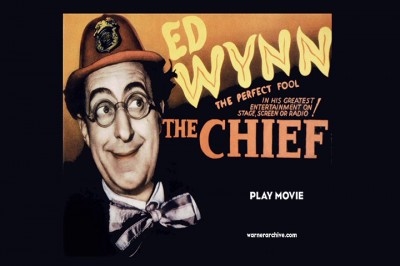 
The Movie
Most people who know anything about Ed Wynn recognize him for his Disney work, particularly his voice acting in Alice in Wonderland, where he portrayed the manic Mad Hatter, or his appearance as floating Uncle Albert in Mary Poppins. That signature voice and persona, with its intense giddiness and comic insecurity, as well as the ever-present sentence-punctuating "you know", is unmistakable, and has influenced many an actor and character, including Alan Tudyk's King Candy in Wreck-It Ralph and Ralph Garman's delightful variations on the Hollywood Babble-On podcast. There's something about just the way he speaks that can draw a smile.

As part of a long, distinguished career that included a Best Supporting Actor Oscar nomination, Wynn developed his "perfect fool" character, which fit well as a descendent of the long silent-film lineage of lucky schmucks that made stars of actors like Harold Lloyd. Combining Wynn's over-the-top fussbucket of a character with the fire chief character he became famous for on the radio, Wynn would star in 1933's The Chief, the story of Henry (Wynn), the dopey department-store clerk son of a heroic fire chief. When Henry accidentally saves the day (and a woman) at a big blaze, he becomes an instant celebrity, and is soon thrust into a political powerplay, being manipulated from all sides in the race for alderman. 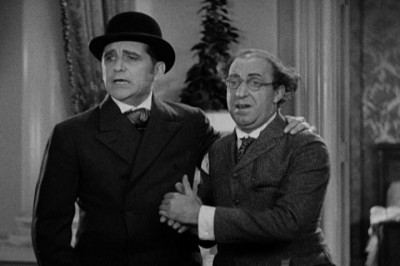 Structured as a series of sketches, including a scene that sees Wynn clown with a chimp and wrestle a bear, the film doesn't create much in the way of momentum, using a Greek chorus of street cleaners as a way to move awkwardly between scenes. There are some interesting moments, like that bear scene, Wynn pretending to be out of his mind and an amusing moment involving Henry's mother and some thugs, but no particular scene offers that different a perspective on the perfect fool, even though one scene, where he explodes on his immigrant tailor, is a bit of a different look for the character. Mostly, the plot is an excuse to make Henry nervous and/or upset, and follow it up with a pun or gag, but the batting average on the comedy is not exceedingly high.

The oddest thing about The Chief (as well as the most disappointing part) is the ending. The film is only 65 minutes long, yet the final five minutes inexplicable cut to a braying Wynn performing his then-popular radio show, which is how the end of the film's plot is revealed in the ultimate antithesis of "show, don't tell." It's certainly meta, but it's entirely out of left field, leaving you wondering exactly what just happened (since today, no one would know about his Fire Chief radio show, removing all traces of context.) Even back in the day it would have been a cop-out, though the excitement of seeing one's favorite radio program in the flesh would possibly override that feeling. Today, it's just a weird and disjointed way to end a film that was disjointed to begin with. 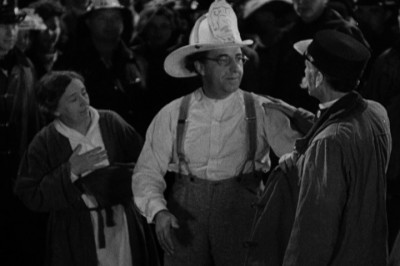 The DVD
The film arrives on one Manufactured-on-Demand DVD-R, which is packed into a standard keepcase. The disc offers a static, anamorphic widescreen menu with the options to play the film. There are no audio options and no subtitles.

The Quality
The full-frame 1.37:1 transfer is solid, with a relatively sharp image that sports a good amount of fine detail and decent black levels. There's a good amount of noticeable damage throughout the film, as well as some jittering, but overall it's a rather nice-looking presentation for a release that hasn't experienced a restoration.

The audio arrives as a mono mix, duped into a Dolby Digital 2.0 track. The sound is good, with solid voices, clear sound effects and effective music. Nothing is dynamic, and the sound isn't going to blow you away. It's a presentation that feels right for the movie's time frame.

The Extras
There are no extras included. 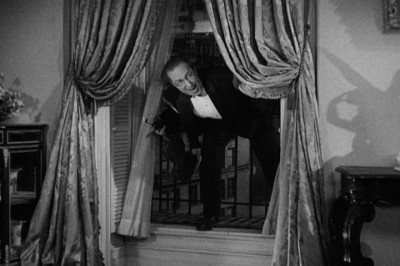 The Bottom Line
The Chief has its moments, but the movie relies almost entirely on Wynn's persona for laughs in its lightly-connected sketches, as his pun-heavy material is powered by his trademark delivery. Thus, if his unusual voice isn't your cup of tea, this is not the film for you. It's almost a film that should have been a silent classic, but you could never get Wynn without hearing him. The film looks and sounds solid, but offers no extras to check out, so the release is mainly for serious Wynn fans.