In the absorbing, stylish French drama The New Girlfriend, a young woman's preconceptions about love and sexuality get upended after learning a secret held by her best friend's husband. Françoise Ozon's twisty little tale ended up on a few critics' lists of the best LGBT films of 2015. For those who couldn't catch it during its limited theatrical release, the solid Blu-ray edition from Cohen Media Group is the next best thing.

Like Ozon's previous international hits 8 Women and Swimming Pool, The New Girlfriend sports a plot that combines mischievous humor and offbeat, sometimes absurd twists in a plush Euro-chic setting. Adapted from a short story by British suspense author Ruth Rendell, the story follows the awakening of Claire (the gamine-like Anaïs Demoustier) as she adjusts to the loss of her friend since childhood, the blonde, enigmatic Laura (Isild Le Besco). Laura died young, leaving behind a husband and baby daughter, whose godparents are Claire and husband Gilles (Raphaël Personnaz). On an impromptu visit to the home of Laura's widower, David (Romain Duris), Claire discovers that the infant is being tended to by a nanny - only she isn't a nanny. The shocked lady that Claire finds is actually David, impeccably dressed in mom-ish drag, complete with makeup and a sensibly coiffed wig. Holy pantyhose, Batman!

Although David's fondness for lady stuff and Claire's puzzled adjustment results in episodes of farcical comedy (the mother-in-law just arrived, what'll I do?!), the vaguely sinister, manipulative way that David is portrayed brings out an unexpectedly dark side to the story. Though Claire and David weren't too chummy while Laura was alive, the revelation brings them closer. David explains to Claire that Laura knew that he enjoyed cross-dressing when they met. He put a halt to it while they were married, although since Laura's death the drag came back out as a way to comfort the couple's child. Claire understands and even encourages David's female drag persona. They arrange to keep it a secret from their friends and families, delighting in the fact that the person they call "Virginia" - despite her gangly body and horsey face - looks like an actual woman who enjoys shopping sprees, receiving flirty advances from men, and being as feminine as she can. What Claire can't come to grips with is that she's falling in love - not with David, but with Virginia.

Ozon's track record has proven him adept at a wide variety of genres - The New Girlfriend differs slightly in that it awkwardly switches between the comedic and suspenseful. At times it even feels something like a parody of yuppies-in-peril '90s thrillers like The Hand That Rocks the Cradle or Single White Female. The lead characters are constantly seen in plush, sterile settings and fashionable clothes, which takes some bite off the deeper implications at hand. David's ambiguity as a character is something different, however. He emerges as a manipulative creep, completely going against the grain of most contemporary depictions of transgendered people as saintly souls. In the strictest sense, David isn't transgendered - he's happy having male parts and still sexually attracted to women, he just feels like his real self in traditionally feminine garb. Actor Romain Duris well-conveys David's increased confidence as a woman, as well as his manipulative side. Anaïs Demoustier also does a good job portraying Claire's mixed reactions to David's transformation - and the growing realization that it's herself that's undergoing a profound change. Although the character of Claire's husband Gilles doesn't get enough prominence in the story, Ozon's focus on David and Clair gives this film a striking, intimate potency. 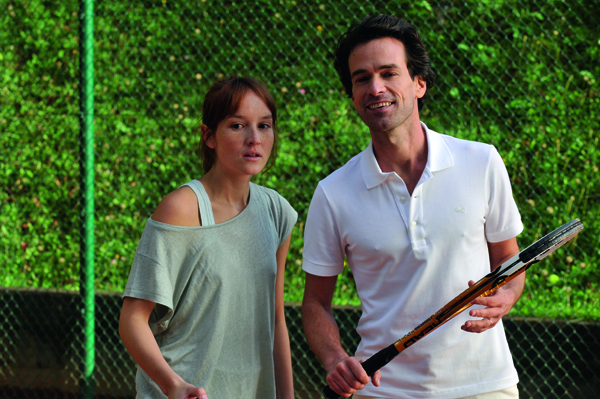 Cohen Media Group's Blu-ray of The New Girlfriend showcases the film in its original 1.85:1 widescreen aspect ratio. The filmed 35mm picture is appealingly colorful and lifelike, with special attention paid to soft, realistic textures and a muted yet realistic color palette. Skin tones appear pleasant and warm, while the light levels maintain a consistency straight through the mid-range. The transfer on this disc is also well-done, with no instances of pixelization, banding or interlacing.

The film's French language soundtrack is given a good DTS-HD Master Audio mix which keeps the pristine dialogue, music and sound effects on equal levels. The soundtrack has a good amount of fidelity, with some substance to the bass end without getting too showy about it. Surround effects are kept to a minimum. The optional English subtitles are the default setting upon disc's insertion; no other sound or subtitle options are provided.

The 45-minute behind-the-scenes featurette Romain Duris: Portrait of "The Actress" supplies candid footage from during the film's production, including Duris getting dolled up in female drag (testing out makeup and clothing options, etc.), handling an unpredictable infant, and acting opposite Anaïs Demoustier. Devoid of interviews or narration, it's a standard yet interesting look at the workaday situations that Ozon and crew came upon. The disc also contains about 10 minutes' worth of Deleted Scenes. Although much of the footage was extraneous, the scenes also include a character (Clair's gay co-worker) who ended up completely excised from the final cut. The Theatrical Trailer rounds out the extras. Upon disc insertion, a few other trailers for Cohen Media Group releases auto-play.

The New Girlfriend is a strange hybrid of suspense and kitschy black humor which never adequately settles into either camp, although fans of director-writer Françoise Ozon will delight in the film's out-there premise. Cohen's Blu-ray offers solid A/V with a few intriguing extras. Recommended. 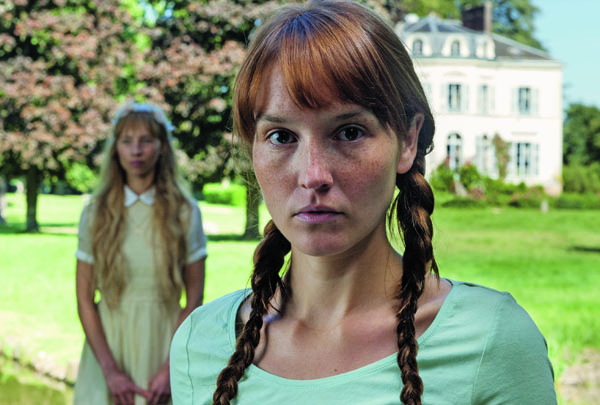