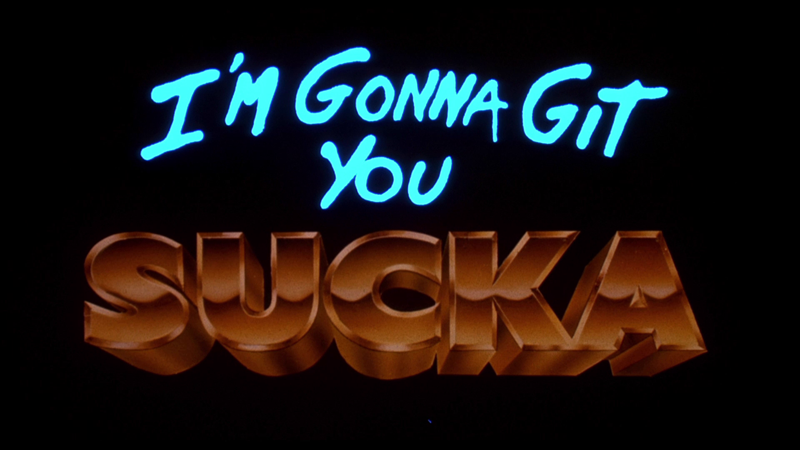 
The Movie
Growing up, my favorite adult (as in not kids) movies, outside of ‘80s college comedies like Revenge of the Nerds and Real Genius, were Mel Brooks' spoofs. The sense that anything could happen and it was usually going to be hysterical made every one I watched a moment of pure joy. So when I saw I'm Gonna Git You Sucka, it was eye-opening, since this was not the same brand of comedy, yet still extremely funny. Keenan Ivory Wayans offered the same quality laughs, but set in an entirely new world (at least to me, who at the time was not exactly attuned to blaxploitation films.)

That's probably the film's greatest strength, as you don't have to know a thing about the genre to enjoy the story of Jack Spade (Wayans), a military man returning home following the death of his brother Junebug from O.G. (over gold.) Unfortunately, Junebug's addiction to gold necklaces and other jewelry left him in debt to the local crime kingpin Mr. Big (Animal House's John Vernon), and he's sent his goons to collect from Jack's mama (Ja'net DuBois) and Junebug's wife Cheryl (Dawnn Lewis.) Seeing his neighborhood's now overrun with crime and his family threatened, he decides to do something about it and take on Mr. Big. He turns to his childhood hero, John Slade (the great Bernie Casey), for help, leading to a gathering of some of the baddest blaxploitation archetypes, portrayed by Isaac Hayes, Jim Brown, Antonio Fargas (Starsky & Hutch's Huggy Bear) and Steve James. 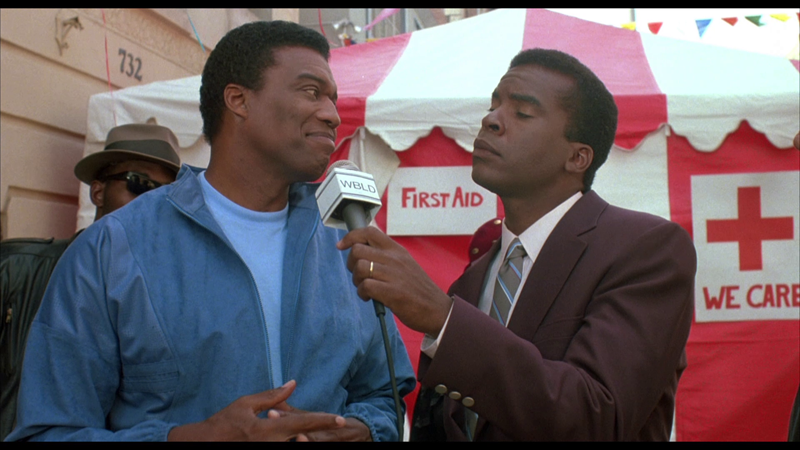 Though there are some great performances throughout, with Casey being his usual cool cat, Hayes and Brown playing against their tough-guy personas and fun smaller parts for Damon Wayans, a pre-New Jack City Chris Rock and David Alan Grier (not to mention a fantastic cameo pairing of Mod Squad's Clarence Williams III and Eve Plumb of The Brady Bunch), the movie rides on Keenan Ivory Wayans' ability to play the least heroic hero possible, pretending to be the toughest. The contrast results in a great deal of fun, especially when he has to be saved by his mama (or at least a hysterically obvious stuntman playing his mama.) The best part of Wayans' performance though is when he loses his cool, which never fails to be funny, and makes one wish he made more movies in this vein.

If Wayans wasn't influenced by the master of spoofs, it would be a major surprise, considering how the look and feel and the tone of the comedy feels like like it could be an ‘80s Brooks film (which is no insult.) Whether trying sight gags, special effects-reliant bits or a simple running joke, Wayans just goes for it, hitting at a remarkably high percentage that keeps the comedy rolling in every scene. His effective use of meta jokes, commenting on film tropes like heroic theme music, is another silly, yet classic element from the heyday of spoofs that's more than welcome here, as it helps ensure that the film never takes itself too seriously, while still managing to tell a decent approximation of a blaxploitation story. However, if you have no idea who Slaughter was or what in heaven's name a bean pie is, you needn't worry. There's something for everyone here. 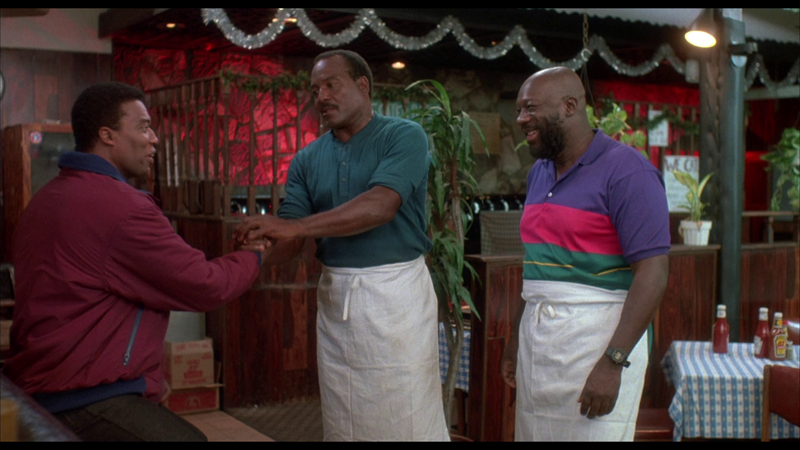 The Disc
Another entry in Kino's Studio Classics line, I'm Gonna Git You Sucka arrives on one Blu-ray disc, which is packed in a standard keepcase with attractive painted poster art on the cover. The disc has a static menu with options to watch the film, select scenes, adjust the setup and check out the extras. There are no audio options, but subtitles are available in English.

The Quality
The 1080p, AVC-encoded 1.85:1 transfer on this disc is good, but not great. Appropriate but never vibrant, colors are solid throughout, as are flesh tones, while the level of fine detail is reasonably high (background textures are visible, along with the medals on Spade's jacket), even if the image is sometimes a touch soft. A consistent grain structure is present, and black levels are deep, with night scenes looking quite nice, if not particularly dark. Some occasional damage can be spotted, but more annoying is the near-constant jitter that's evident through much of the film. It's most obvious during the opening titles, but can be noticed in scenes that stand still a moment. Interestingly, when compared to the non-anamorphic transfer on the original MGM DVD, this transfer has a bit more image at the top of the frame, which doesn't reveal much that's different, but it is certainly not the same framing.

The audio is presented via a center-balanced DTS-HD Master Audio 2.0 track, which handles all the aural elements of the film well, with clear dialogue and sufficiently strong sound effects and music, with a funk/soul soundtrack that has enough power to do the job. There are no concerns about the audio.

The Extras
A full-frame making-of featurette (5:35) includes on-set footage and interviews about the film with Keenan and Damon Wayans, Casey, James, Vargas, Hayes, Lewis and Vernon. It's very promotional, encouraging viewers to see the film, and doesn't go into much detail regarding the production of the film. Then there's additional interviews and b-roll (4:35), which offers longer clips from the making-of featurette, mostly with praise for Wayans' work on the film are writer and director, and more of of the production effort.

Also included are a full-frame trailer for this film (2:11) and widescreen trailers for Delirious (2:22), Up the Creek (3:16) and Truck Turner (5:13). The Truck Turner preview, starring Hayes and Yaphet Kotto, is the most memorable, not only for its excessive length but an insane clip of a shootout in a hospital. 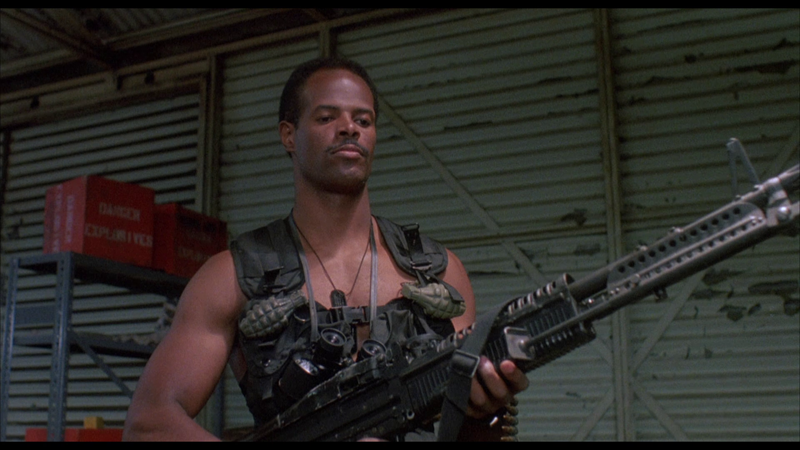 The Bottom Line
A delightful spoof of blaxploitation films, I'm Gonna Git You Sucka offered a glimpse at what Keenan Ivory Wayans would later perfect with In Living Color, delivering plenty of laughs with the help of a talented cast of legendary action stars and up-and-coming comedians. Though the extras are limited, the quality offers a solid improvement over the previous DVD, making it a disc fans will want to add to their collection, while newcomers who love a good, silly spoof should give it a look.