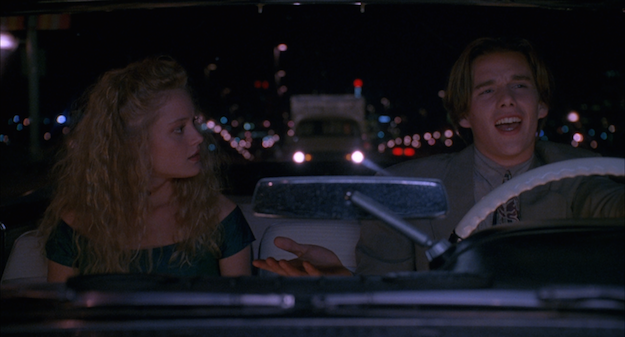 The 1991 thriller-comedy Mystery Date belongs to an unusual niche of films, like The Night Before and Adventures in Babysitting, in which some well-meaning suburban kids spend a night unwittingly dropped into the middle of the urban criminal underworld. Ethan Hawke stars as the well-meaning suburban kid in this movie, Tom McHugh. Tom is a high school-age misfit whose first date with his dream girl Geena (Meet the Parents' Teri Polo) is hampered by run-ins with an angry flower delivery dude, with scorned women quick to slap his face, and, even more disconcertingly, with Chinese gangsters who wish to kill him.

It's all because they think Tom is actually his brother, Craig (Brian McNamara), and that's not exactly an accident. You see, Tom is a sweet, shy kid who has little practical experience of the world. He's unsure of who he wants to be. So big brother Craig figures, why not turn Tom into a carbon copy of himself? Craig calls up this Geena girl, pretending to be his younger brother, and scores Tom his dream date. Then he takes Tom to buy new clothes just like his. He gets Tom a new haircut just like his. He buys Tom eyeglasses with non-prescription lenses just like his. Tom finds it all a little strange, but he has such love for his big bro that he doesn't say no.

Craig even gives Tom his credit card, books the restaurant for the date, hires a limo, and buys some flowers (but skimps on the tip, hence the angry flower dude). If it sounds like Craig is taking a bizarre amount of interest in this date, there's a good reason for that: Craig wants to create an alibi for himself while he goes off and commits a crime.

Tom finds out the hard way that his big brother is not an upstanding lawyer but is instead an asshole criminal (*hold for lawyer joke*). As he and his date go from spot to spot, Tom ends up running into people who don't know Craig, so much as they know of him. And they don't like what they know. The angriest of the bunch is Chinese mob boss James Lew, played by a gleefully hammy B.D. Wong. Craig stole a valuable vase from Mr. Lew, and he fully expects Tom to be able to turn over his missing property. Problem is, in this pre-cell phone era, Tom can't get his brother on the damn phone to straighten this all out.

When Pre-Teen Me originally saw Mystery Date in the theater, I was impressed by how dark this comedy went. For example: early in the date, the limo doesn't show up, so Tom takes his brother's slick '59 DeSoto out of the garage. Great car, but it happens to have a dead body in the trunk. And not long after discovering it, Tom finds a reason to jam another dead body into that trunk as well. However, having seen a Coen brothers film or two in the intervening years, this movie's moments of black comedy seem a little less bold than they once did.

Apparently, this was also a complaint of the film's late co-screenwriter Terry Runte (who, along with partner Parker Bennett, also wrote the infamous Super Mario Bros. movie). Before the inevitable studio re-write process, Runte intended the film to be edgier, and to have the criminal brother intentionally set Tom up to be killed in his place. Honestly, I'd kinda like to see that movie.

Even without knowing that trivia, you can sadly feel the film pulling some of its nastier punches. Fisher Stevens has the thankless role of the angry flower delivery guy, who keeps chasing and pestering Tom all night about the skipped tip, thinking he's Craig. (Let's ignore the fact that this doesn't make sense, since he got an excellent look at Craig's face when he delivered the flowers.) The flower delivery guy gets a comeuppance that would (in real life) and should (in the movie) kill him -- but clearly some studio suit said, "We gotta make this PG-13 for the kids." So the flower guy survives, as though he were Wile E. Coyote, and what dies instead is the sense of danger and menace that previously helped define the story.

Still, Mystery Date is more enjoyable than not. The main reason for this is the undeniable charm of young Ethan Hawke, whose sweetness and charisma redeems the moments when the plot or mood otherwise falters. Teri Polo is quite engaging as well, although the film sidelines her too much, especially after setting up that she's an expert at solving mysteries who could theoretically be useful in helping Tom piece together what's going on with his brother and this gangster. And speaking of the gangster, I got a massive kick out of the don't-give-a-shit broadness of B.D. Wong's performance: at least one person was having fun making this movie. 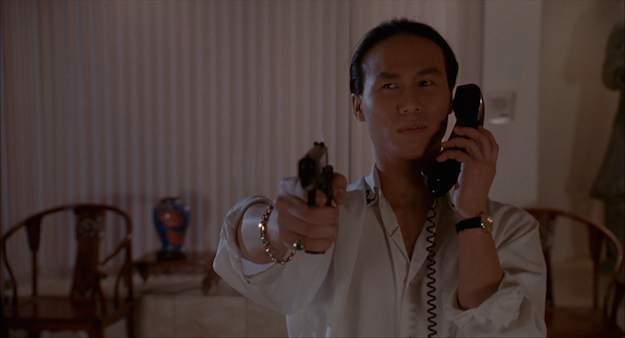 The Video:
A strong AVC-encoded 1080p 1.85:1 transfer here, highlighted by vivid colors and excellent clarity. Few noticeable specks on the image and consistent density throughout.

The Audio:
Mystery Date has its fair share of needle drops throughout, and this DTS-HD MA 2.0 stereo mix really showcases them well. The dialogue and effects are otherwise clear and present. For a forgotten early '90s flick, this is a nice little mix. None of the audio dubs or subtitle tracks made the leap from 2003 DVD.

Final Thoughts:
Well, Pre-Teen Justin, Mystery Date isn't quite the unjustly neglected gem you thought it was, but it's still a fun, entertaining movie, with an appealing cast and some glimmers of unexpectedly dark humor. Coupled with the surprisingly strong A/V presentation, this disc easily comes Recommended. 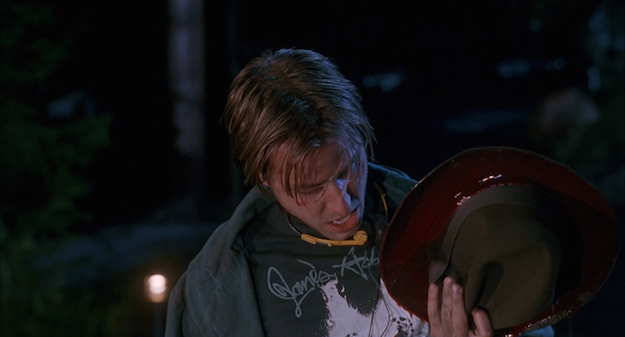