By my count, Fritz Lang's massive 1928 German silent Spies (a.k.a. Spione) contains about 50 characters, 100 plots, 500 subplots and more than 10,000 individual cuts (don't hold me to that, however). Yes, it's bloated and overlong, yet there's no denying that all modern spy films can easily trace their lineage to this one, made when the 36 year-old auteur was flying off of the prior year's extravagant masterwork Metropolis. This more modest but no less ambitious film survived only in a butchered 90-minute cut for decades, until it was given a massive digital restoration in 2004. That two-and-a-half hour version is included on the Kino Classics Blu-ray from Kino Lorber, presenting this influential, lightning-paced opus as closely to how it was originally seen as possible.

Watching Spies is a bit like being caught on a runaway train, hurtling towards places unknown. Lang's script, a collaboration with then-wife Thea Von Harbou, moves forward in constant momentum. Though the dialogue is often silly, it is kind of exciting to see these now-familiar conventions as they were being sorted out in this film. The main story line concerns a dashing spy known only as no. 326 (Willy Fritsch), a German operative who becomes seduced by an alluring Russian lady spy, Sonja Baranikowa (Gerda Maurus). Although 326 believes that his identity isn't known to Sonja, he's actually part of a setup engineered by Sonja's boss, Haghi (Rudolf Klein-Rogge), the ringleader of a massive spy organization which he runs under cover as the stolid president of a bank. Adding a wrinkle to the operation: Sonja finds herself falling in love with 326. Haghi is trying to wrest confidential info from 326 and others regarding a crucial, secret Japanese treaty. When he finds out that Sonja has been carrying on with 326 against his orders, Haghi (who not-so-coincidentally bears a resemblance to Lenin) shuts Sonja in a secret room in his massive compound. A bullying, power-mad overlord, terrified young lovers - is this Metropolis, Part II?

As with Metropolis, Lang fills Spies with dynamic imagery (lots of diagonals), kinetic editing (most impressively showcased in the dazzling opening scenes), and ultra-modern production design. Unlike Metropolis, this film is too hokey, long, and bloated with story to be an enduring success, although the sheer effort involved is admirable. Individual scenes stand out more than the whole, especially the unexpectedly poignant subplot at film's mid-point, when Haghi sends another comely female spy, Kitty (Lien Deyers), into the home of his biggest adversary while the girl deceives as a penniless waif from an abusive home. The powerful Japanese security envoy Akira Masimoto (Lupu Pick) takes pity on Kitty and conveniently makes her his concubine, with the girl plying classified info right under the man's nose. In an unsettling parallel to Akira's master/concubine relationship with Kitty, the girl's successful outcome makes her the "favorite" with the creepy, manipulative Haghi, burning Sonja and sending her more passionately into 326's arms. The final hour ties some of the story's loose ends together in several chaotic, bravura set pieces.

At more than two hours, Spies throws everything at the viewer in ways that are exhilirating - and surprisingly boring. Lang gets some terrific performances from the cast, particularly Maurius (with whom Lang was having an extramarital affair during filming) and the imperious Klein-Rogge. Maurius was a discovery of Lang's, new to films, and it turned out that pairing her with the established Fritsch (funny and charming) gave this otherwise sprawling saga some focus. Seeing this uncut version makes me curious as to how successfully the truncated version condensed the story - as it stands, Spies is an experience best consumed in smaller doses. Part of its sprawling sameness was Lang's doing, although with silents there's a lot to be said for the value of a good score that matches the varied moods in the film. The Kino Classics Blu-ray sports a piano score by Neil Brand which carries the same sense of breathless urgency throughout the movie, an energetically played yet (here I go again) exhausting soundtrack. An alternate score for this film does exist - Donald Sosin's on the Region 2 release - although it's sorely missing here. 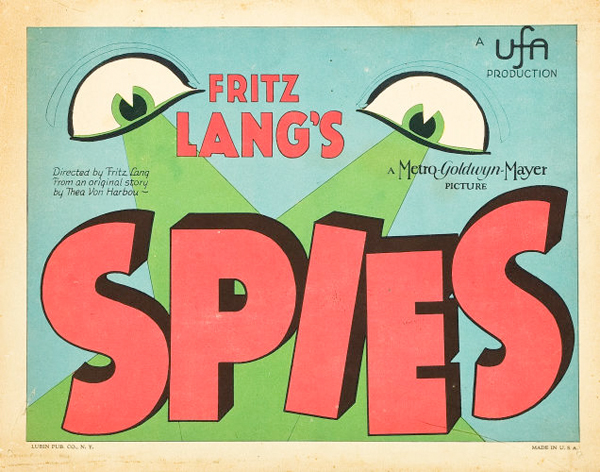 The 1.33:1 aspect ratio 1080p transfer on Kino Lorber's Blu-ray edition of Spies comes sourced from a comprehensive 2004 digital restoration of the film performed by German preservationists Friedrich-Wilhelm-Murnau-Stiftung. The restoration was pieced together from the best-available surviving prints all over the world, although considering the sources it has a clean, consistent look throughout. Apparently there were some issues with the image being stretched for both this and Kino's recent Diary of a Lost Girl, although if you didn't know this info beforehand one would be hard-pressed to notice anything wrong. A moderate amount of dust and debris show up in the film, preserving the character of when it was first shown. The black and white photography (no tinting) appears nicely textured and fairly even, although there were a few scenes where the white levels looked blown out.

The disc sports only a single instrumental track, a piano-based score composed by Neil Brand. The 2.0 Stereo track is a clean-sounding affair with a good dynamic range. Optional English subtitles

The main bonus is a comprehensive, enjoyable documentary on the film, Spies: A Small Film with Lots of Action (2006; 72 min.). Produced for German television, Guido Altendorf and Anke Wilkening's film recounts Lang's and Thea Von Harbou's conception of the film and the orders from UFA to produce a "safe," star-driven film in the wake of his costly flop Metropolis. It includes interviews with the children of actors Willy Fritsch and Gerda Marius, although most of it is done in a visual essay style. A highlight compares the various close-up takes Lang shot, each of which would be subsequently used in various international prints of the movie. The disc also contains the film's International Theatrical Trailer (5 min.).

Fritz Lang's elephantine German silent Spies doesn't count as a film that one would return to again and again, although the remarkable visual techniques he'd used in Metropolis are on full display in this ahead-of-its-time spy saga. Recommended. 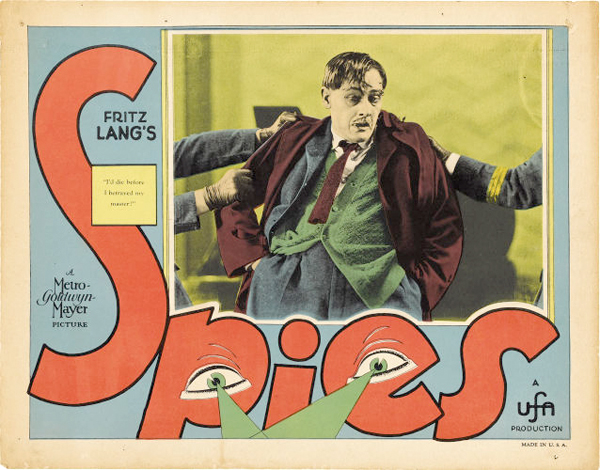