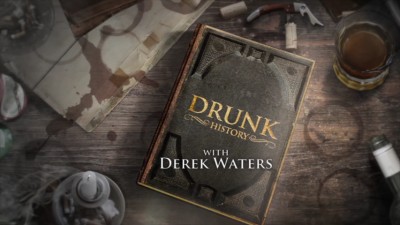 
The Story So Far...
Starting life as a web series, Derek Waters and Jeremy Konner's Drunk History builds on a brilliantly simple concept: people who are drunk love to tell stories and they usually have trouble doing so. So, if you focus that idea, and have those drunks only tell historical stories, and then recreate those stories, using the actual inebriated ramblings as the dialogue and big-name comedy guest stars, you get an ingenious little series. The show has aired for three seasons on Comedy Central, and the two previous seasons were released on DVD in November of 2015, and DVDTalk has a few reviews.

The Show
The great thing about centering a series around history is that there's a lot of it. You're not going to run out of stories for the drunks to tell, nor will you have to rely on the same "characters" over and over. And even when you're focusing on a historical moment that is well-known, there are always angles the general public doesn't know. That's the part of Drunk History that's really so enjoyable: you can actually learn something from the slurring comics trying to kiss or molest Waters. This time out, Waters hits a few new areas, including New Jersey, New Orleans and New Mexico (get it?), as well as Cleveland, `Los Angeles, Las Vegas and Oklahoma, while also offering more topic-based episodes, looking at spies, games, journalism, inventors and space.

There are some fantastic stories brought to popular light here, including the growth of the cocaine trade in Miami, Charlie and the Chocolate Factory author Roald Dahl's sexy spy background, the story of the first black casino and the tale of Nellie Bly and her trip around the world. The show is at its best when it corrects commonly-held misconceptions, like in showing how truly impressive the whole story of Harriet Tubman is, or when it shines a spotlight on sadly lesser-known historical figures, like Mary Phelps Jacobs, the inventor of the bra. But despite such inspiring tales, as well as touching stories like the love story between Carl Sagan and Ann Druyan (which brings narrator Holly Laurent to inebriated tears), the series is all about the laughs, of which there are many. 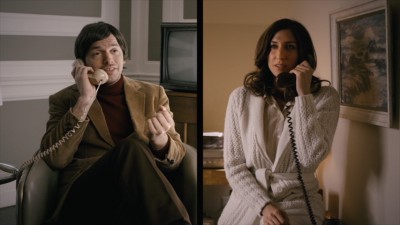 As in previous seasons, the narrator role calls on a mix of lesser-known talents, like Lucius Dillon and Jessica Meraz; some up-and-comers like Cameron Esposito, Lauren Lapkus and Claudia O'Doherty; and a few big names, including Jenny Slate, Community creator Dan Harmon, Wet Hot American Summer director David Wain, Drunk History all-stars Paget Brewster and Jen Kirkman and bon vivant Paul F. Tompkins. Some are better than others in letting their personality shine through their stories, while some make it more about themselves, sometimes getting out of hand by knocking over lamps, pawing at boom mics and wrestling with Waters. All in all though, there are no "bad" narrators and no story falls flat. They all work in some way or another.

The way the period costumes and settings bang up against the casual way the stories are told creates a hilarious disconnect, especially when something happens to distract the narrator, which usually is reflected in the recreation hysterically. Thus, when Tompkins has a case of the hiccups, Frank Sinatra does as well, and when Drew Droege imitates a police siren, it sidetracks everything. The effect of the lip sync really is the strongest element of the series, and makes anything funny, especially when there's a distinct gender mismatch between the narrator and the actor. And, as juvenile as it may be, watching a historical character rant drunkenly or curse casually is surprisingly funny.

If you wonder what Derek Waters brings to the series, take a quick look at the British version of the series, which has no host in the segments (just an off-screen producer.) Then hurry back to the colonies with a new appreciation for Waters, as the two series couldn't be more different. The only place the series could do without Waters is on the host's side jaunts, like when he hits up a wrestling school or goes on a zero-gravity flight. These are too disconnected from the concept and less engaging than the stories (feeling like a better fit for Dave Attell's fantastic, much-missed Insomniac.) He should just stick to the drinking and the talking. 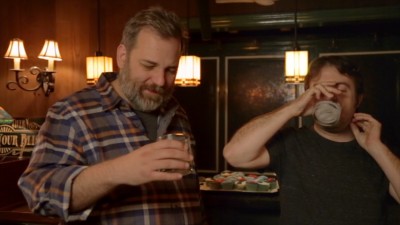 The DVDs
Packaged in a standard single-width keepcase with a dual-hubbed tray, Drunk History Season 3 arrives on two DVDs. The DVDs offer static, anamorphic widescreen menus with options to play all the episodes, select shows, adjust the setup and check out the extras. Just as it was with the first release, audio options include Dolby Digital 5.1 and 2.0 tracks, while subtitles are available in English SDH.

The Quality
Like last time, the anamorphic widescreen transfers can't touch the quality of the HD airings, looking a little soft, with some occasional imperfections, like some aliasing and some issues in the black shadows. Color and fleshtones are good through, and nothing is so heinous that it will distract from the show. Why there's no HD version is another issue altogether.

No change in terms of the audio, as the Dolby Digital 5.1 tracks remain consistent but lacking in dynamic presentation, as the voices set up shop in the center channel, and the music finds a home in the sides and rear channels. There are no issues with distortion and the elements all have their own but that .1 just doesn't have much of anything to do, thanks to the nature of the show. However, you'll hear all the F-words in solid clarity, thanks to uncensored audio.

The Extras
On the box, it indicates that this set features five totally unblurred episodes. It's been awhile since these aired, so I'm not quite sure what exactly that's supposed to mean, since the only nudity I noted was in "New Orleans" and that's not one of the unblurred episodes. Best guess is that on-screen swears are not blurred, like the subtitle on Werhner Von Braun, which clearly reads "Complicated MF-er" on a giant red button that says "You're F'd" in this set. So, don't expect much from this feature.

All of the extras (46:07 in all) are found on the second disc, broken down by episode and moment, unfortunately without a play-all button. There's an assortment of clips available to wander through, including some deleted historical scenes, some narrator outtakes and some extended clips, but the highlights have to include Slate's near-death story, Harmon's impromptu mattress commercial, four-plus minutes of Kirkman trying not to sneeze her brains out and more than a minute of Tompkins laughing uncontrollably.

As enjoyable as some of the clips can be, disappointingly, it's a lot less than the first release, where season two had over two hours of extras on its own, and there are no sober reveals this time around, which was one of the best parts of the first DVD. 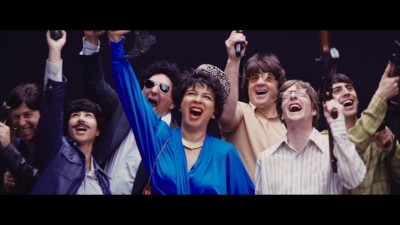 The Bottom Line
Three seasons in, Drunk History remains as great as it ever was, a near-perfect mix of fact and comedy that's organic in earning its laughs while being genuinely informative at the same time. This latest release features another 10 excellent episodes, presented well and coupled with a good amount of bonus content (though less than the previous release provided.) Hopefully, Waters and his merry group of drunkards continues their assault on livers and the story books for a long time to come.