Acorn Media // Unrated // December 8, 2015
List Price: $39.99 [Buy now and save at Amazon]
Review by Stuart Galbraith IV | posted January 7, 2016 | E-mail the Author
I've precious little to add to this review of Doc Martin - Series 7 (2015) not already stated in past reviews of earlier seasons. Now in its eleventh year of on-and-off production* the comedy-drama's good and bad points remain largely unchanged. In short, Doc Martin still delights in many respects while remaining downright frustrating and irritating in other ways. 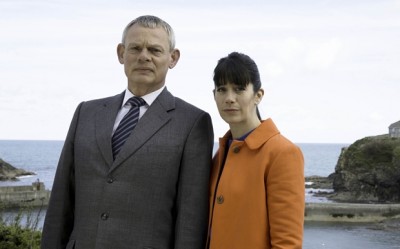 (Mild Spoilers) In the picturesque seaside town of Portwenn, Cornwall, astute but abrasively antisocial Dr. Martin Ellingham (Martin Clunes) and his long-suffering schoolmaster wife, Louisa (Caroline Catz), have separated, she having abruptly left him to visit her mother for an open-ended getaway in Spain while Martin's unclear marital status is the talk of the town.

At the urging of his physically frail psychologist Aunt Ruth (Eileen Atkins), Martin agrees to see a young but acclaimed psychotherapist, Dr. Rachel Timoney (Emily Bevan). Louisa returns to Portwenn but now wants to live apart (with their toddler son) from Martin. When suitable accommodations for her and the baby cannot be found, Martin selflessly allows Luisa and the baby to move into his home (above his surgery) while he moves in to a dilapidated flat elsewhere.

Meanwhile, Al Large's (Joe Absolom) Airbnb-type bed and breakfast business hurtles headlong toward disaster, while his father, Bert (Ian McNeice), is drowning in debt and on the verge of losing his restaurant. Crazy, obsessively lovelorn chemist Mrs. Tishell (Selina Cadell) rather unbelievably is back on the job, still pining away for Martin, while Martin's perpetually lazy receptionist, Morwenna (Jessica Ransom), is as eccentric as ever. Meanwhile, local constable PC Joe Penhale (John Marquez) gets a Taser gun in the mail, with the expected results.

As always, Clunes's hilarious characterization is at the show's center, forever scowling fiercely, except on rare occasions when, taken by emotional surprise, a wide-eyed and childlike innocence washes over him. Martin remains a glowering, aloof presence with no bedside manner or tact.

He's expectedly wonderful whenever he's on, and the show's supporting players and their characters' eccentricities are likewise amusing for the most part. The show is at its best whenever Martin is interviewing and treating patients, and during its almost ritualistic third act medical crises.

However. Doc Martin really jumped the shark long ago with its central story thread: the relationship between Martin and Luisa, whose stormy romance and, finally, marriage has been teased beyond the point of exasperation. Looking back, Doc Martin would have been a better show had Luisa left during the second series and never came back, allowing Martin to become involved with other, more varied women.

The basic problem is this: In its early series, the charm was that Luisa saw a humanity in Martin others did not, cracks in his surly mask of misanthropy she found lovable and admirable. Nonetheless, his lack of basic social skills constantly test her patience and, ultimately, her willingness to commit to a long-term relationship, even though she was in love with him.

Over time, this relationship has mutated into something else. For at least the past three or four seasons (meaning five or six years in real-time) Luisa's profoundly selfish vacillation about their relationship has bordered on passive sadism directed toward luckless Martin. Martin has continually made every effort to alter his behavior for her benefit: taking measures to cure his blood phobia, seeing a therapist during this batch of shows, waiting patiently if worriedly for her return, even surrendering his own home to accommodate her.

Luisa, however, remains stubbornly noncommittal. When Dr. Timoney asks Martin to bring Luisa to their therapy sessions, Luisa initially refuses, telling Martin that he should take care of his own problems first. In short, theirs is a disastrously unhealthy relationship far too damaged for too long to be salvageable. The show's producers, writers, and actors might agree with this but there's also a strange, almost contradictory air in the way this material is being presented, as if it were not the ruinous problem it all too clearly is. On one hand it's quite realistic, a textbook case of one, never-satisfied partner continuously making unreasonable (if passively expressed) demands of the other, and who, in turn, moves heaven and earth to please his demanding half, but to no avail, and certainly never toward any happy end.

I've only seen half of Doc Martin seventh series shows and there are some indications there may be some kind of final resolution to this core issue by the finale. There really needs to be. For too long it's been akin to Chinese water torture.

Doc Martin - Series 7 is presented in 16:9 enhanced widescreen, which again shows the picturesque locations (actually Port Isaac, Portwenn is fictional) to good advantage. The eight 46-minute episodes are on two single-sided discs. The 5.1 Dolby Digital Surround is up to contemporary television standards (with a couple of startling good uses of directional audio), and the shows include optional English subtitles.

Supplements include nine behind-the-scenes featurettes running a total of 72 minutes and a photo gallery.

As before, I'd strongly recommend those new to the program watch it from the beginning. Doc Martin - Series 7 is funny and charming, if notably infuriating in terms of its core series-long relationship thread. Still, Highly Recommended.