Though it's mostly remembered today for spawning a hummable, Oscar-winning hit song, 1966's Born Free was a landmark. The movie related the efforts of a British couple to raise a baby lion like a big house cat, with the ultimate goal of releasing it into the wilds of Kenya where it belonged. While the end product is a bit fanciful, the movie remains a lovingly done, thrilling travelogue with a positive conservationist message - nicely presented in a new Blu-ray from the folks at Twilight Time.

Born Free found its source story from a best-selling 1960 memoir by an Austrian naturalist, Joy Adamson, who recalled her experience in Africa raising an orphaned lioness she dubbed Elsa alongside her game warden/adventurer husband, George. For the movie, producers Sam Jaffe and Paul Radin expanded Adamson's simple, optimistic book into a widescreen metaphor about the human need to live without boundaries. In the process, it became a very of-its-time message piece - tapping into the '60s-era need to get back to basics - which resulted in the film becoming a huge hit. Happily, the movie has held up quite well, with good performances from the lead actors and a fantastic, mood-setting score from John Barry.

Narrated by the calm, sing-songy voice of actress Virginia McKenna, Born Free strikes a halfway point between nature documentary and melancholy-tinged, heart-tugging drama. McKenna's Joy is settled in Kenya, with her husband George (Bill Travers, who was also McKenna's spouse). The death of a local woman by a hungry lion prompts George to go on an expedition to capture the beast. In the process, he shoots a lioness in self defense, leaving behind three baby cubs. George brings the cubs home to Joy, who uses her untapped maternal instincts to bottle-feed them to health. Once the cubs are slightly older, George intends to take them to a zoo in Rotterdam, although Joy objects when it comes to the smallest cub, Elsa, with whom she's developed a special bond. Although the couple's knowledgeable friend John Kendall (Geoffrey Keen) cautions against it, the Adamsons decide to keep Elsa with the ultimate goal of releasing the matured lion back into the wild, where hopefully she can integrate with an established pride. Despite a lion's de-domestication having never been achieved before, Joy and George are determined to get Elsa where she belongs.

Watching Born Free now, it's easy to see why this became such an immediate hit in 1966. The main couple approach their dilemma with a can-do cheer, taking on Elsa the way a loving yet exasperated parent would, while the widescreen photography and gorgeous score adds exoticism and grandeur. Another thing worth noting is the natural photography, with nature scenes seamlessly integrated with the drama (this was a huge stumbling block in big studio movies of that era set in faraway places). There's also a needed touch of sadness when they realize the impossibility of what they're attempting. The supplements on Twilight Time's Blu-ray reveal that there were lots of liberties taken with the story - Joy and George weren't quite the harmonious couple depicted onscreen (they separated by the time the film came out, in fact) and Elsa's rehabilitation went much less cleanly than what's implied in this hopeful movie. Despite all that, Born Free remains admirable for taking on a completely unsentimental view of the impact humans have on animal habitats. 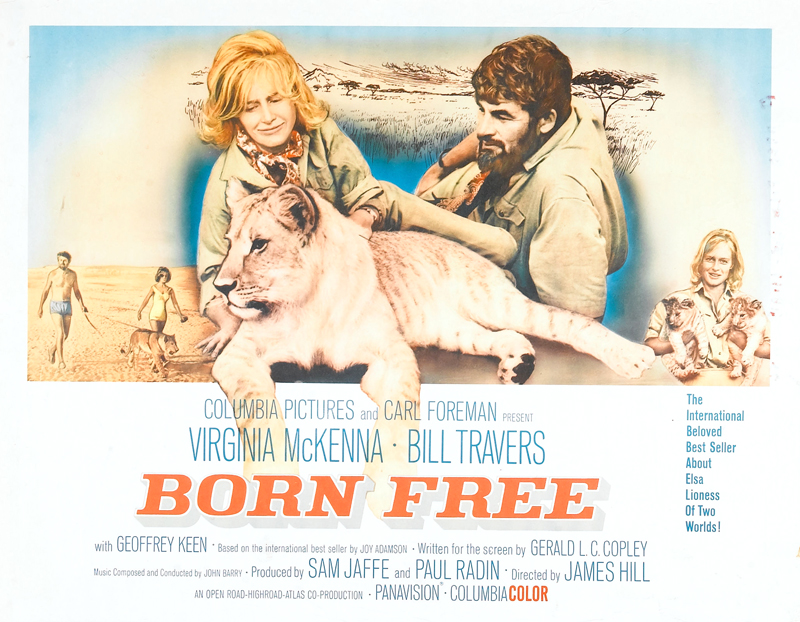 Twilight Time's "Limited Edition Series" Blu-ray of Born Free has been manufactured in an edition of 3,000 units. While the exterior package design seems somewhat generic, it's appealing enough (and, hey! DVD Talk's Glenn Erickson is quoted on the back). It comes in a clear plastic case with an African landscape printed inside the insert. The 8-page supplementary booklet includes stills from the film alongside an essay by Julie Vigo.

Born Free is presented in its original 2.35:1 theatrical aspect ratio, sourced from an incredibly clean print. The transfer contains hardly any instances of dust or other signs of age, with a pristine visual that conveys the texture of celluloid without looking too digitized. The light balance tends to look somewhat blown-out on the brighter end of the spectrum, but otherwise the disc well preserves the film's outdoor vistas with lifelike color and sumptuous detail.

The 1.0 DTS-HD mono sound also preserves the way the film was originally exhibited in theaters, with an expansive mix that keeps the dialogue, sound effects and scoring on equal levels. Despite the limitations of mono sound, it's a solid listen. Optional English SDH subtitles are also included.

A fun Audio Commentary has Twilight Time regulars Julie Kigo and Nick Redman joined by Jon Burlingame, a journalist and John Barry scholar. This is a lively track which illuminates how much of Joy Adamson's real struggles with Elsa and her husband ultimately made it onscreen, along with the highlights of the film itself. An Isolated Score Track allows listeners to appreciate how much John Barry's scoring contributed to the film's success. Given that this is one of Barry's best scores, the inclusion is a huge plus. The disc also contains the film's Theatrical Trailer and Teaser Trailer, along with an onscreen catalog of other Twilight Time discs. The 8-page Booklet supplies a lot of helpful background on the film's production in Julie Vigo's appreciative essay.

Nurturing a lion cub like an oversized kitty cat: still not a good idea. Born Free was among the most cherished of family films of its time for the warts-and-all depiction of life on the African veldt it presented. Despite feeling somewhat sanitized, it still holds up handsomely. Lovers of top-notch docudramas would do well to drop a few bucks on Twilight Time's lovely disc of this heartwarming '60s smash. Highly Recommended.