Olive Films // PG-13 // November 24, 2015
List Price: $29.95 [Buy now and save at Amazon]
Review by Tyler Foster | posted January 14, 2016 | E-mail the Author
Note: Although screencaps should only be considered an idea of what the disc looks like, click any capture in this review to expand the image to a full size .png. 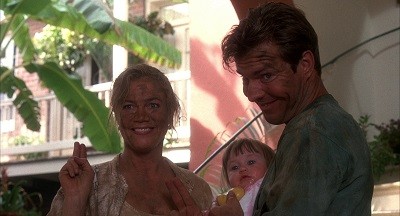 Jane (Kathleen Turner) and Jeff Blue (Dennis Quaid) have just had a baby, and the both of them are taking off work for a few months to spend time with the child. They've picked New Orleans as a comfortable spot to spend their extended vacation: hit some parties, try the clams, check out the local zoo. It'd be perfect, except for Muerte (Stanley Tucci), the local thug constantly trying to win a fight with Jeff, police officers Sawyer (Obba Babatunde) and Halsey (Larry Miller) snooping in their business, and their boss Frank (Richard Jenkins), trying to entice them to come back to work...which would involve stopping a former nemesis, Novacek (Fiona Shaw) from getting away with some stolen nuclear warheads.

Undercover Blues is a weightless but generally enjoyable action-comedy that succeeds mostly due to the dynamite combo of Turner and Quaid, whose chemistry is effortless and even unexpectedly sexy. Director Herbert Ross has more aptitude with the comedy than the action, which is generally cartoonish (and at one point, frustratingly obscured), but then again, the whole movie is kind of cartoonish, with the only real criticism likely to be that Jane and Jeff are so good at their jobs that they come off more smug than funny.

The way Blues jumps right into the action is kind of odd: it makes the movie feel like a sequel to something nobody saw (an enterprising 20th Century Fox employee might've done well to pitch a remake of the movie as Mr. & Mrs. Smith 2). 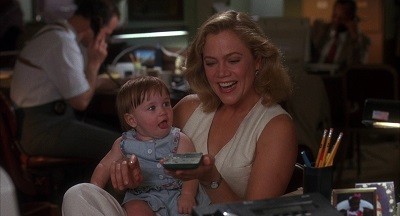 Still, it doesn't take long before Jeff first encounters Muerte -- who he nicknames "Morty" -- in an alley while taking the baby out in the stroller, and is forced to beat him up (look for Dave Chappelle's debut performance as Morty's one-time partner in crime). Shortly thereafter, they take on the job Frank is offering, casually investigating a couple of local weasels (Dennis Lipscomb, Saul Rubinek) as they work their way toward Novacek's hideout.

There really isn't much to the movie other than Turner and Quaid's charisma, both together and apart, so it's good that both flow freely. Quaid plays his typical kind of role, cracking wise with a big grin and freely dipping his toe into outright goofiness, but Turner is the real pleasure. It's not just the one-liners, it's the confidence that goes with them -- it's hard to take her eyes off her as she casually kicks poor Muerte into the ground without putting down her shopping bags. It's also oddly lovely how unreservedly positive Jane and Jeff's relationship is. They're not just happy, they're passionate for each other, which makes the movie surprisingly romantic.

Not everything in Undercover Blues is on the money or has aged particularly well. One slightly tasteless gag has Jeff prodding Jane into faking a seizure in a zoo as a distraction, and it's hard to tell who thought it was a good idea for Miller's character Halsey to sport a goofy lisp. Part of the movie's big finale also underwhelms, when a climactic escape sequence is jumped over with a fade-out on the sound of gunfire. Still, on top of Turner and Quaid, the movie boasts a strong supporting cast -- Muerte is a one-note gag, but reliable thanks to Tucci, and the development of Babatunde's skeptical but intrigued lieutenant is lively. 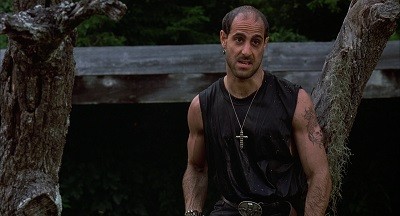 Undercover Blues flopped at the box office, only grossing around half its $25m budget, but it's a reliably entertaining picture with a bit of comic and romantic energy to spare.

The Blu-ray
Neither of the two original posters for Undercover Blues are particularly impressive, and the DVD artwork just riffs on that. On the other hand, there isn't much to this new Blu-ray cover, which features the leads basically just looking at the camera through sunglasses, but I do like the bold red, white, and blue color scheme. The one-disc release comes in a boxy Infiniti Blu-ray case, and there is a postcard insert that can be mailed off if the owner wants to receive the Olive mail-order catalog.

The Video and Audio
Presented in 1.85:1 1080p AVC, Undercover Blues gets an above-average treatment in its jump to high-definition. Although depth is not particularly impressive, colors are nicely saturated and appear accurate, and detail is very good. At times, contrast seems a touch anemic, but it's a minor issue. There's really not much to say about it -- a thoroughly good-looking transfer, no real anomalies, but maybe not exceptional either. Sound is a DTS-HD Master Audio 2.0 track that has quite a bit of panache when it comes to handling the movie's many action sequences. 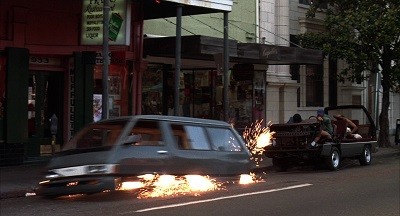 Even without the benefit of additional channels, there is a reasonably impressive amount of directionality in the mix when it comes to character placement and action, and the soundtrack is nice and poppy. As is the norm for Olive releases, no subtitles or captions are included.

The Extras
None, other than an original theatrical trailer.

Conclusion
I'd be surprised if Undercover Blues hadn't built up a decent cult following on television over the years, and anyone who enjoyed it will be reasonably pleased by this Blu-ray edition, which offers what ought to be a solid (if unremarkable) upgrade over MGM's decade-old DVD. Recommended.