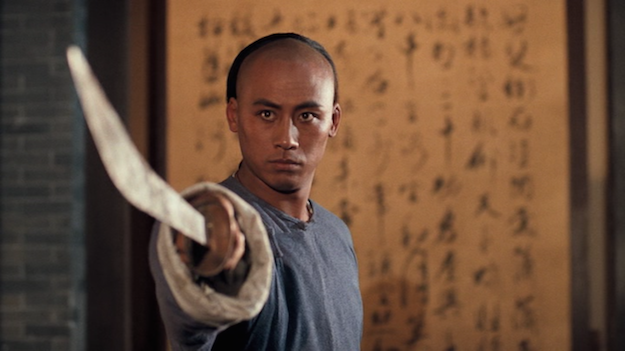 At the end of last year, a quartet of action flicks from Hong Kong's Golden Harvest studio found their way to manufactured-on-demand (MOD) region 1 DVD-R releases, courtesy of the Warner Archive Collection. The earliest flick in the batch was the pretty good 1986 martial arts melodram-edy Pedicab Driver, from star and director Sammo Hung. The next release was also helmed by Hung, and it features his fight choreography (as well as a brief cameo appearance as an extra-dedicated prison guard). It is the 1993 historical wuxia pan epic, Blade of Fury.

Blade of Fury is about... um... well... it's about... um... it's about an hour and forty-five minutes long. (Ha ha! But seriously, folks...) If Pedicab Driver was a baffling clash of goofy slapstick hijinks and incredibly dark drama, well, Blade of Fury is frequently just baffling. To say that the central plot of the film is confusing would require first identifying exactly what out of the things that occur onscreen constitutes a plot.

The film begins with a title card explaining that China gave Taiwan to the Japanese in the early 20th Century, to avoid a war. However, many Taiwanese and Chinese refused the Japanese takeover. To prove the point, we are shown an attempted sneak attack on Japanese troops by some of these rebels, in a confusingly presented mix of wire work, cartoonish prosthetics (in service of a lot of fake-looking dismemberments), undercranked fast-motion, and optically printed slow-motion that creates a sequence so elaborate and over-the-top that it comes as a shock to find out that the whole thing is pretty much unrelated to what follows. Sure, the leader of the rebels, Wang Wu (Yeung Fan) resurfaces later in the film as an idealist-turned-cynic (eventually turned back into an idealist), but why does the film spend ten minutes setting up Japanese bad guys who never, never pay off?

The story really kicks in (I think) years later on the road to Peking, when we are introduced to would-be government reformer Tan Tzu-Tong (Ti Lung) and his servant, played by Cynthia Khan, who pretends (unconvincingly) to be a man for most of the movie (and then, apropos of nothing, just stops pretending and lets her hair down around fifteen minutes from the end). Tan meets another government official, Yun Shi Kai (Chiu Cheung-Gwan), after they fight a horde of bandits together, and they become kinda-sorta friends, except that Tan thinks that the Chinese government needs a serious overhaul and Yun thinks it doesn't, so really instead of being kinda-sorta friends, they're kinda-sorta enemies. Frenemies. Definitely. They're definitely frenemies.

And, like I said, Wang Wu shows up again, and he ends up starting a kung fu school. And there's... like... a big kung fu match in the middle of the movie... and, like, this Japanese lady who is an expert at martial arts, but her voice is dubbed by a man, so I'm not sure if she was supposed to be pretending like Cynthia Khan, or what?... and there's this random noble lady who takes a shine to Wang, played by the awesome but sadly underused Rosamund Kwan from the Once Upon a Time in China movies... and then, like, a bunch of people martyr themselves for the cause, which is... reform? Of some kind?

Blade of Fury devotes a lot of screen time to characters discussing the pros and cons of government reform, which makes me presume these scenes are intended to tap into Chinese history to offer perspective on some then-current situation in politics, except that all of this dialogue is so damn vague that I doubt I would know what these characters were talking about, even if I knew what they were talking about.

As with Pedicab Driver, Sammo Hung's talent as a director and fight choreographer really comes to the fore during one-on-one combat. The mid-film kung fu competition utilizes many of the same speed tricks as the muddled battle-scene opening, but these effects help to focus the action here instead of diffusing it, making the setpiece lively and inventive. Similarly, the inevitable big multi-person showdown at the climax of the film works because it is essentially presented as a series of one-on-one fights, instead of a cross-cut jumble of sped-up and slowed-down choreography and gore.

Watching Blade of Fury is rarely boring, but its story is so confusingly constructed -- and its fight scenes fewer and farther between than, say, Pedicab Driver -- that I expect only the most die-hard Hong Kong martial arts fans will want to wade through the murk to get to the fight scenes. If you fit into this niche of movie junkie, then many of the fights -- especially the ending -- are probably worth the wade. 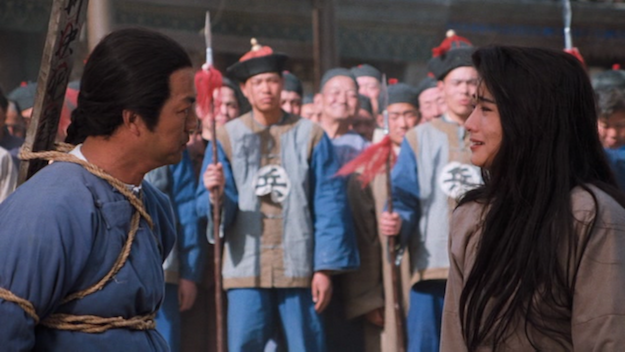 The DVD
Blade of Fury is presented on MOD DVD-R by the Warner Archive Collection.

The Video:
At its baseline, this widescreen 1.78:1 presentation is actually quite good. There's a nice level of detail for standard-def and a natural-looking color palette. But then, the film elements used to make this transfer fluctuate in quality, particularly in regard to the amounts of dirt and damage throughout. The digital encode is a little wonky too: in most shots, everything looks crisp and problem-free, but in many wide shots with complicated action or elaborate background elements, blocky artifacts rear their little heads.

The Audio:
The Dolby 2.0 mono audio fares better, with no drastically noticeable damage or compression issues. The dialogue (which again is unhelpfully labeled "Chinese" on the box, but which I'm guessing is Cantonese, based on the Pedicab Driver disc) is clear, as well as the effects, ambience, and music. Once again, the only subtitle option is English SDH. As with Pedicab Driver, certain things that don't really need captions -- like "[clanging]" when two blades hit each other -- make this track unnecessarily frustrating in spots. Fortunately, however, this film is a lot less jam-packed with captions like these. I managed to not have to have shut off the subs every time an action scene came on this time around.

Final Thoughts:
If you prefer your kung fu epics to be grounded by strong stories, you can probably just give this particular flick a pass. If you are a fight junkie who will sit through anything, I think the inventive fight scenes in this film are enough for it to be mildly Recommended. 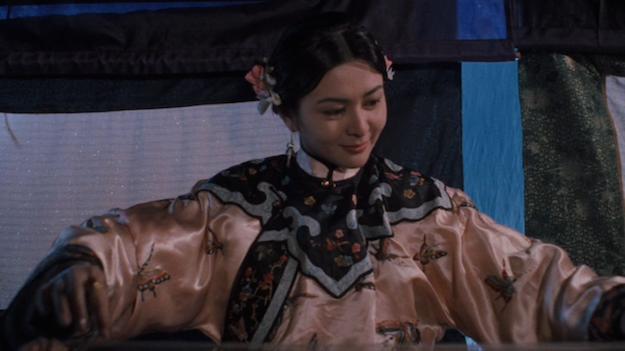