Visual Entertainment // Unrated // December 11, 2015
List Price: $244.44 [Buy now and save at Amazon]
Review by Stuart Galbraith IV | posted January 17, 2016 | E-mail the Author
CBS/Paramount began releasing the popular detective drama Cannon (1971-76) to DVD in 2008 and its even longer-lasting spinoff, Barnaby Jones (1973-1980), in 2010. In sharp contrast to the label's excellent transfers of other library shows filmed in 35mm (Gunsmoke, Perry Mason, Hawaii Five-O, etc.), episodes of Cannon utilized complete but prehistoric video transfers that looked pretty terrible. When they got around to releasing the first season of Barnaby Jones, CBS/Paramount ponied up the money to create new transfers of those shows. They must not have sold as well as they thought they would. No more season sets of either followed after Cannon's second and Barnaby's first, in 2010.

When indie label VEI sublicensed both from CBS/Paramount and announced Complete Collection boxed sets, I hoped against hope that both shows might be remastered. After all, this high-def age all but demands it, not just in terms of home video but also with regard to licensing those shows to free cable channels and other forms of syndication around the world. There may not be great demand for terrible-looking episodes of Cannon on DVD, but new transfers may make financial sense for other reasons.

Not surprisingly, VEI's Complete Collection set of Cannon utilized the same sorry video transfers seen on CBS/Paramount's Seasons 1 and 2 sets. With Barnaby Jones, I was a bit more optimistic. Perhaps they had remastered the entire run of that program all at once. Maybe they'd all look great.

No such luck. Not only does Barnaby Jones: The Complete Collection use analog-era video masters for seasons 2-8, they're syndication masters that are cut for time, running three-to-four minutes shorter than their original broadcast versions. Additionally, according to the packaging, some of the music has been altered. From the many episodes I sampled, the original scores don't seem affected, but possibly a song or two, licensed for broadcast but not home video, have been cut or replaced.

These cut shows actually look very slightly better than the Cannon shows; possibly they were made a few years later, but still probably date back to the 1980s if not earlier.

As I stated in my review of Cannon's Complete Collection set, on one hand I'm glad to at least have access to the entire series, but licensee VEI is being brazenly deceptive if not outright dishonest in the disclaimers preceding these shows. (But, significantly, mentioned nowhere on the packaging.) What they essentially claim is that these video transfers look terrible because the show is old, and that old movies and TV shows look terrible in their natural state. Needless to say, that's total B.S. Cannon and Barnaby were shot on 35mm film, until very recently the industry standard for movies since the 1890s and numerous television series since the late 1940s. Other CBS/Paramount-owned shows, even much older ones likewise shot in 35mm, look great.

Statements like that, and VEI is hardly alone, do themselves, their customers, and a general understanding of what's possible and what simply is unaffordable, a great disservice. And it comes awfully close to flat-out lying. "The episodes on this disc were authored using the best available masters" doesn't tell the full story, but at least that's honest. And, I believe, disappointments like this would go down better if companies like VEI and CBS/Paramount were forthright and told consumers words to the effect of, "While we'd love to create new high-def transfers, the expected revenue doesn't justify the money we'd have to put into it. Nevertheless, we figured fans of the series would like to at least be able to purchase the entire run of the show, imperfect though it is." 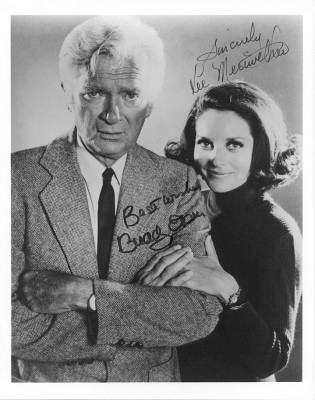 As for the show itself: After Buddy Ebsen's still-popular sitcom The Beverly Hillbillies was abruptly cancelled during CBS's notorious "Rural Purge" of 1971, the actor quickly rebounded as Barnaby Jones, aging, milk-guzzling private eye. The series was nearly as popular as Ebsen's previous success, running eight seasons to Beverly's nine. And like The Beverly Hillbillies' Jed Clampett, Ebsen would reprise the character at least once, ironically enough in a cameo in the 1993 feature film of The Beverly Hillbillies.

The series began with the murder of private eye Hal Jones (Robert Patten), shortly after arranging a late-night meeting with colleague Frank Cannon (William Conrad). Learning of Hal's murder, Cannon offers his services to Hal's widow, Betty (Lee Meriwether) and her father-in-law Barnaby, a retired private eye himself. Though Barnaby keeps Cannon on as a consultant, he resolves to solve his son's murder himself. After catching the killer, Barnaby opts to keep the family business open, with Betty acting as his assistant.

Barnaby Jones exemplified the late-'60s/early '70s trend toward gimmicky detectives, featuring private eyes that were too fat (Cannon), too old (Barnaby Jones), restricted to a wheelchair (Ironside), etc. The series was also patterned somewhat after Columbo, the Peter Falk "howcatchems" in which the murder and murderer are plainly shown at the beginning, the fun being in watching the detective gather evidence culminating with the murderer's arrest, sometimes after goading him into a confession. While the influence is clearly there, a rip-off it's not, though Barnaby Jones still isn't half the show Columbo was.

It's not clear if the decision to pattern the series after Columbo was made from the beginning or if that came later, but it's interesting the show plays up Ebsen's age rather than the backwoods persona with which he had been so long associated. Columbo's appeal was always that the murderers were wealthy and sophisticated, who underestimate the working class, lowbrow detective. Instead of working in that direction, Barnaby Jones plays up, painfully at times, Barnaby's age. Ebsen was, after all, an ex-dancer, still lithe and only 64 when the series began - two years younger than Harrison Ford was when he made Indiana Jones and the Kingdom of the Crystal Skull - but at times people treat him like he's just wandered off from the nursing home. And then there is what's supposed to be Barnaby's endearing trademark: he drinks tall glasses of milk, never hard liquor. It's a bit much. (He's less the dairy-addict in later seasons.)

Another stark difference between Barnaby and Columbo is that Ebsen plays the character almost humorlessly, as if he wanted to break completely from being identified as Jed Clampett. His colleague Cannon outwardly may appear more intimidating (Conrad, of course, got his start as a bad guy in the days of film noir) but is actually warm-hearted and friendly. Poker-faced Barnaby, on the other hand, is inexpressive and lacking warmth. It's too bad (at least in the episodes this reviewer watched) Barnaby was loathe to cut loose once in a while, maybe do a little soft-shoe for Betty in the office now and then.

But Barnaby Jones is undeniably well-produced, like other QM shows, notably slicker than rival Universal's cop and detective shows, which always looked cheap and raggedy, Ironside being one obvious example. QM also ponied-up the cash to stack their shows with a better roster of guest stars, though QM tended to use the same people again and again, season after season, particularly busy players like Andrew Duggan, Tim O'Connor, Gary Lockwood, Marlyn Mason, James Olsen, Dabney Coleman, etc., actors who made the rounds on all the QM shows, sometimes more than once per show per season.

Mark Shera joined the cast in 1976 as J.R. Jones, the son of Barnaby's murdered Chicago cop cousin, that case being the basis of the Season Five premiere. (Having a close relative murdered is, apparently, an employment requirement at Barnaby's office.) Shera was added to the cast for two reasons: 1) to have a younger male actor in the cast physically able to take down the bad guys, as required; and 2) give Ebsen more time off. Ebsen may have enjoyed the lightest working schedule for a star of a TV series since Fred MacMurray stopped shooting entire seasons of My Three Sons in just 65 days.

Barnaby Jones - The Complete Collection contains all 178 episodes (plus the Cannon crossover episode) in attractive, sturdy packaging, with the episodes subdivided by season. The transfers, as described above, are bland, very dated and problematic transfers for seasons 2-8, cut by between three and four minutes. What's missing? Hard to say, but all of these seasons 2-8 shows appear to delete QM's standard multi-act format titles ("Act I," "Act II," etc.) so it looks like mostly they've cut the first 15-30 seconds off the head and tail where the commercial breaks originally were, often deleting establishing shots from each act, though usually there's also an abrupt cut and/or artificially-added fade-in and -out at least once during each episode. My guess is complete masters exist, but they're probably even older and look much worse. By today's standards, the poor video quality and cut shows simply aren't acceptable. Audio is mono English only with no subtitle options.

The only real supplement is the Cannon crossover show, which looks even worse than the post-first season Barnabys.

Barnaby Jones - The Complete Collection is something hard-core fans will want to have only because it's highly unlikely this will be remastered for home video anytime in the next decade. And that's a shame.