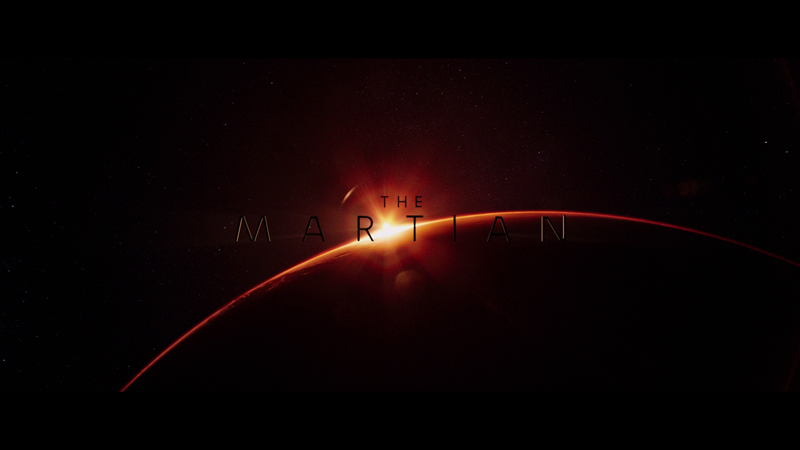 
The Movie
Whether The Martian manages to win itself one of the six Oscars it's been nominated for, the film has a spot in the history books locked up. When it won two awards for comedy at the Golden Globes (because not even the Hollywood Foreign Press Association could argue it's a musical), it became possibly the most egregious example of category fraud in the Globes' existence. Is The Martian funny? Somewhat, for brief stretches, though saying it features a charming lead or one who feels like a real person is a more appropriate way to describe the film. If you come away from the story of Mark Watney (Matt Damon) and think it was a comedy, you should stop reading and schedule an appointment with a very nice doctor who can help you with your problems.

Watney's story has an unfortunate start, as the botanist, who is part of a team studying Mars, gets lost in a sudden windstorm on the Red Planet, and, thought dead by his team, is left behind in a last-second escape. However, through cinematic coincidences, he manages to emerge bloodied but not beaten, however is most definitely stranded. Thus starts his tale of survival, enhanced by his log videos, as he must outsmart the unforgiving environment for years in the hopes of waiting until the next mission to Mars finds him. Meanwhile, on Earth, his activities are noticed, kicking off a massive rescue attempt at NASA. As tends to be the case in such situations, it becomes a race against time, as Watney attempts to fend off his fate in the face of obstacles, and the team at NASA struggles with a tight timeframe to figure out a way to save him.

Naturally, since he's on his own on Mars, the movie relies on Watney being worth spending time with. With a lead like Damon, it would be hard for director Ridley Scott to be in better position to succeed, as his charm is undeniable, and the character, created by novelist Andy Weir and adapted by The Cabin in the Woods screenwriter Drew Goddard, is entertaining to spend time with and root for, as a hero who uses intelligence to overcome problems and a strong sense of humor as a defense mechanism against the realities of a seemingly hopeless situation. If you had to spend the majority of a film watching one person, Damon's Watney is as good a choice as any. 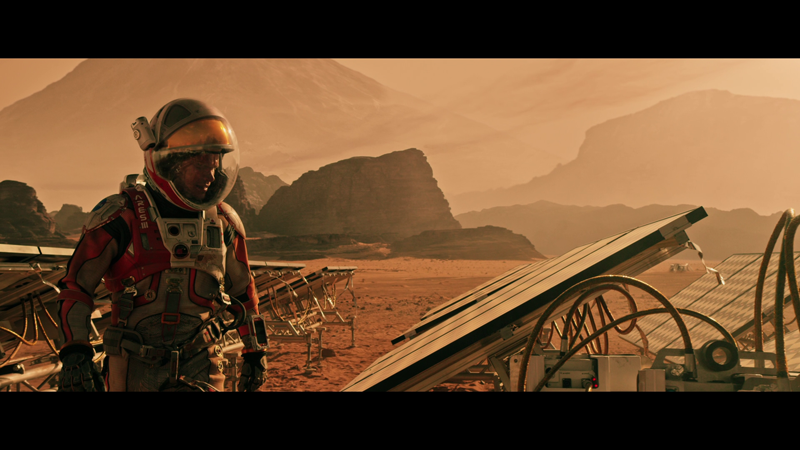 During the remainder of the film, when we're either with the fine folks at NASA (and the Jet Propulsion Lab) or on-board with the crew of the Ares mission, the movie loses a bit of steam. It's hard for scenes about government agencies and the struggle of innovation against deadlines to match a tale of survival on an alien world, and the great cast that populates them, including Jeff Daniels as NASA's head, mission director Chiwetel Ejiofor and Jessica Chastain as the crew's leader, doesn't get much in the way of meaty moments for most of the film (better to forget that in this supposed "comedy" Michael Pena's comedic relief is more of an afterthought, Donald Glover gets little more than a cameo and Kristen Wiig doesn't have an opportunity to do anything that indicates a name actor should have been in her role.) Damon's Watney is so much more enjoyable to watch and his situation so much more interesting that whenever he's not on-screen, you're thinking about getting back to him, rather than what's happening at the moment.

The space adventure in The Martian and any time Watney "sciences the **** out of Mars" are quite enjoyable, and part of that is the beauty of the settings and the skill Scott uses in presenting them. He whips up tension with ease (aided by the concern Damon earns from the audience) and shoots the world of Mars in a way that's both fantastical and realistic, with an artistry that will be both familiar (ghosts of 2001: A Space Odyssey haunt most of the scenes aboard the crew's spaceship) and fresh, as the film translates today's ever-present personal surveillance to the future, making a man's time in Martian solitary a little less lonely. Between Scott's work, Damon's hero, and an overall impressive technical presentation, there's a lot to like about The Martian, but to those who nominated and awarded it on film's biggest stage: where were you when Duncan Jones joined forces with Sam Rockwell to give us the infinitely better and more fascinating Moon? 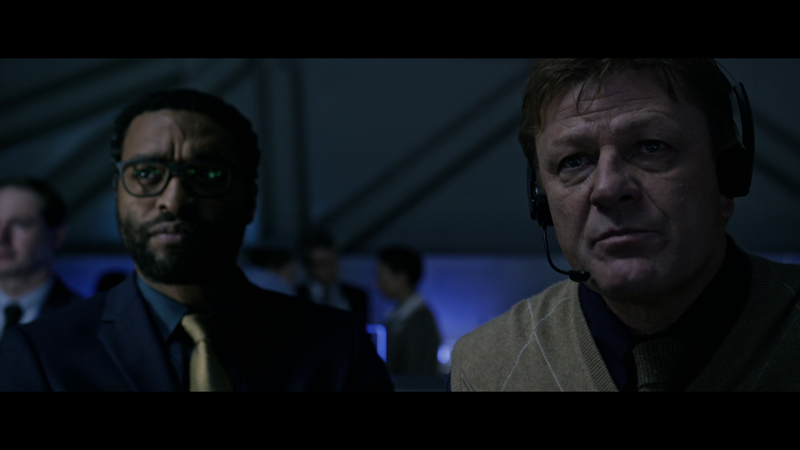 The Disc
The Martian arrives on one Blu-Ray disc, in a standard Blu-ray keepcase with a slipcover that repeats the cover art. The disc's animated menus, featuring a video log theme the choice to watch the film, select scenes, adjust languages and check out the special features. Audio options include English DTS-HD Master Audio 7.1 and English Descriptive, Spanish, French and Portuguese Dolby Digital 5.1, while subtitles are available in English SDH, Spanish, French, Portuguese and simplified Chinese.

The Quality
The 2.40:1, AVC-encoded 1080p transfer on The Martian ensures that the film's visual wonders make it to home screens in proper shape, whether it's the beautiful vistas of Mars or the digitized video journals Watley keeps, thanks to excellent fine detail and rich color that's appropriate through all settings. The sharp image allows important details to be seen clearly, while black levels are deep and action scenes are thankfully free of any kind of digital distractions, resulting in a pleasing image throughout, even when, in the dark of space, it could have succumbed to trouble. The outer space footage offers up poster-quality frames regularly.

As good as this film looks, it sounds even better, with a 7.1 DTS-HD Master Audio 7.1 track that takes full advantage of those speakers around you, moving sound effects and source music throughout, supplementing the action on-screen through discreet placement and movement. It's not all bombast though, as the sound is engineered to create the right feeling for the setting, and its effective peaks and valleys guide the feel of the film. Dialogue is clear, sitting mainly in the center channel, which the score gets a boost from the surrounds to give it sufficient weight in the mix, ensuring good separation for all the aural elements. As one might expect from a film with rockets and so-forth, the low-end is a key player in the sound, and it does its job well, rumbling you when needed.

The Extras
The extras start by looking at the production, beginning with "Signal Acquired: Writing and Direction" (9:36), which reaches beyond those elements a bit by touching on themes in the film and book, features a host of people from in-front-of and behind the camera, including Damon, Chastain and Ejiofor, along with Weir, Scott, several producers and NASA's James L. Green. The core focus however is Weir's book and Scott's direction, which is discussed from both sides of the filmmaking experience. The info about how the source novel traveled from blog post to feature film will be of interest to anyone whose knowledge of The Martian begins and ends with the movie.

Continuing the theme of combining film elements that might have deserved their own extras, we get "Occupy Mars: Casting and Costumes" (14:13), which looks at the film's actors and the space suits they wear. All of the main players sit down for interviews, where they talk about joining the cast and what it's like to work with Scott, while costume designer Janty Yates talks about the ideas behind the film's two suits, which, based on reactions from Damon and a stuntman, are not the easiest costumes to work in. If you want more about the film's design, the "Production Art Gallery" features 199 pieces of concept art, illustrations and plans for almost every visual element in the film, including variations on several designs, allowing for a peek at how the film might have looked if other decisions were made,

A 7:33 gag reel shows the cast goofing around and making flubs, as well as the aftermath of Glover's unplanned fall. It's an amusing reel, mainly thanks to Damon's charm.

The rest of the extras take an interesting angle, expanding on the film in different ways, starting with "Ares III: Farewell" (3:35). A faux livestream, with tweets (or the 2030s alternative) from viewers in the corner of the screen, lets the world meet the crew of the Ares III mission as they prepare for their launch, with Watney acting as host. This is apparently what the Golden Globes voters were watching, as there's a good sense of humor on display. The same can be said for "The Right Stuff" (3:20), supposed footage from the Ares archives. After emerging from 10 days of isolation training, the Ares crew meets with a psychiatrist for evaluation, and, with the exception of Chastain's uber-serious captain, it's a funny bit.

"Ares III: Refocused" is a 17:18 show that looks at the internal conflicts that took place during the rescue mission in the film. Daniels, Ejiofor and Bean appear, in character, to look back at what we've seen, with a bit more personal detail from the three men. There's a sense that it's a bit repetitive after watching the film, but as a piece of ephemera from the world in The Martian, featuring three solid actors, it's worth a look.

The film earns its scientific bonafides by bringing in Neil Degrasse Tyson, aged with generosity to fit into the timeframe of the film, for "Ares: Our Greatest Adventure" (3:39), a StarTalk presentation that previews the mission in that stylish, engaging way you expect from our best-known space ambassador.

The last two extras of note are a pair of ads from the Ares mission, one co-branded by Under Armour (so, basically an Under Armour commercial) featuring Watney training (1:03), while the other is an emotional promo (1:34), featuring humanity's response to Watney's plight. Both are very well-made, as good as the best real commercial campaign.

Also included is the film's theatrical trailer (2:55), which certainly doesn't seem like a preview for a comedy, as well as a code for an HD stream and download of the film. 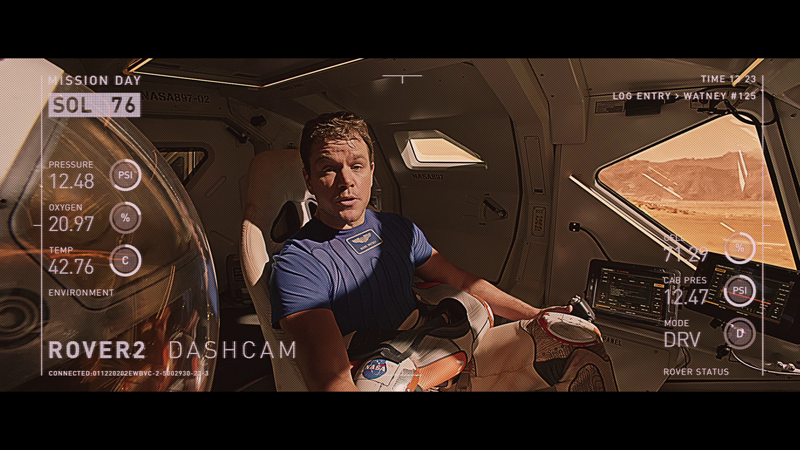 The Bottom Line
Uneven is probably the fairest way to describe The Martian, a film that shows great filmmaking skill and features a tremendous character and performance in Damon's Watley, but which dips a level or two when the star of the show isn't on-screen. Even so, the film is never lacking in technical wonders, and this Blu-ray delivers all that effort in beautiful fashion, adding in a healthy dose of extras that both explore the production and expand on the film. Damon fans should purchase immediately, while anyone who appreciates some good sci-fi drama or an intelligent hero should certainly give it a look.