Deep in My Heart

Deep In My Heart was MGM's star-studded, affectionate tribute to Broadway's operetta king, Austrian-American composer Sigmund Romberg. The glitzy 1954 production looks fantastic on the Warner Archives Blu-ray release. However, as with other musicals of this ilk, the enjoyability of individual numbers far outweighs the movie as a whole. Putting it bluntly, this one's a mess.

By the time Deep In My Heart came out, MGM was well-equipped to do these musical bio-pics. This particular one served as the last in a long line of entertaining-if-factually sketchy movies that stretched back to The Great Ziegfeld (1936), with competent direction from Stanley Donen (Singin' in the Rain; Seven Brides for Seven Brothers) and luxurious, beautifully staged musical numbers. The problem? José Ferrer. The actor had recently won an Oscar for Cyrano de Bergerac, and despite lacking in musical abilities it was probably hoped that his casting as Romberg would add some gravitas to this production. Instead, his portrayal of the composer as a self-assured, determined prick makes this movie a lot more ponderous than it needed to be.

Despite the miscast Ferrer, Deep In My Heart functions decently enough in showing Romberg's career trajectory and the impact he had on early- to mid-20th century Broadway. The movie begins in the 1910s, with Ferrer's Romberg a struggling musician working at the New York café operated by a fellow Austrian émigré, the jovial Anna Mueller (Helen Traubel, MGM's resident matronly soprano). With Anna's encouragement, Romberg secures some work with theater impresario J. J. Schubert (Walter Pidgeon), although he quickly becomes frustrated trying to satisfy Schubert's need for shrill, vaudeville-style novelties (although "Leg of Mutton" is a pretty fun tune). No, he simply must bring his kind of music to the stage - even if it's gaudy and larded with enough sentiment to choke a horse. With the help of a talented lyricist, Dorothy Donnelly (an under-utilized Merle Oberon), Romberg accomplishes his dream production - the generations-spanning romantic saga Maytime. Although faced with skepticism by his agent, Bert Townsend (Paul Stewart), Romberg has the last laugh when Maytime becomes a smash, paving the way for other hits in this old-meets-new vein. While preparing for another show with new collaborators, Romberg falls for a beautiful heiress, Lillian (the impossibly bland Doe Avendon). Sure, he may have conquered Broadway, but the icy Lillian isn't so taken by Romberg's charms - at first.

Deep In My Heart boasts a total 22 songs from 11 of Romberg's shows, many unjustly forgotten. If one goes by the production numbers alone, the movie ends up being an entertaining survey of how gracefully Romberg traversed the worlds of operetta, Broadway, vaudeville and jazz. The highlights include a rare number with Gene Kelly energetically singing and hoofing with his less attractive brother, Fred, in "I Love to Go Swimmin' with Wimmen" from 1921's Love Birds. There's also an incredibly fun 1920s number, "It," with the indefatigable Ann Miller tapping away with a bunch of chorus dancers dressed in leftover Singin' in the Rain costumes. Ferrer loosens up only once, in a duet with his then-wife Rosemary Clooney, for the charming "Mr. and Mrs." Stanley Donen does some incredible staging for a dance number from Romberg's The Desert Song, with Cyd Charisse and James Mitchell in an exotic setting doing moves that are surprisingly sensuous for a 1950s musical. The movie also offers some fine showcases for Helen Traubel, Jane Powell, Vic Damone, Howard Keel, and Tony Martin. In between, however, one has to put up with Ferrer and his monumental smugness - thankfully, the Warner Archive Blu-ray has a "Song Selection" feature. 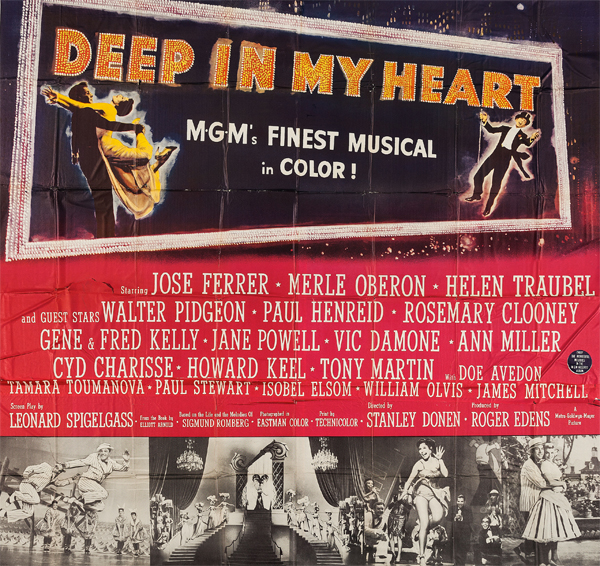 The Warner Bros. Archive Collection Blu-ray presents Deep In My Heart in immersive, sharp 1.85:1 widescreen. The gorgeously detailed, color-saturated mastering is on par with commercial Blu-ray releases of other Warner-owned musicals such as Singin' in the Rain. The digital mastering is incredibly clean with almost no artifacts, while any instability in the original print has been wiped out. The disc serves as a good showcase for the film's Eastman Color photography, with several numbers popping off the screen in a riot of bright color. The only flaws I noticed were that the edges in certain scenes looked overly sharpened.

The disc's sole audio option is a nice, atmospheric DTS-HD Master Audio mix in 5.0 Surround. The sound is big and bold, with a solid bottom end and a good dynamic range. Dialogue is clean and clear, while the musical numbers never get bogged down in distortion. The disc also includes an optional English SDH subtitle track.

Thankfully, the Blu-ray holds over the bonus features included on Warners' 2008 DVD (in standard definition):

Despite a lavish treatment on crispy Blu-ray, Deep In My Heart remains a minor MGM musical biopic only of interest to hardcore fans. With a haughty, miscast José Ferrer as operetta composer Sigmund Romberg, this movie has the twin distinctions of a bland, unremarkable story and a protagonist who's the polar opposite of appealing. Well done, MGM! At least the musical numbers are nice. Rent It.