It's in the Air 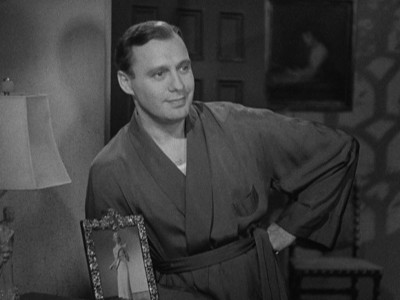 Jack Benny became a comedy legend playing the fey, fussy skinflint in his decades of fame on radio and television. It's an interesting surprise, then, to see him in the 1935 MGM production It's in the Air as a completely different type - a sleazy grifter who smooth-talks his way into co-piloting an experimental aircraft with his dim pal, Ted Healy. Co-starring Nat Pendleton, Grant Mitchell and Una Merkel, this obscure feature is getting some renewed exposure on made-to-order DVD through Warner Archives. Will the resulting disc send you over the moon? Don't touch that dial.

Trading a bit on the '30s crazes for aviation and lovable crooks, It's in the Air basically follows hapless heroes Benny and Healy for 80 minutes as they dig themselves into an ever-deepening hole. Benny's Calvin Churchill has a deal going with Healy's Clip McGurk wherein the two fleece racetrack gamblers, fleeing the scene as soon as the police catch on. It's during once such occasion that they barely escape Henry Potke (Nat Pendleton), an I.R.S. investigator attempting to nab Calvin for tax evasion. Calvin eventually hides out in Palm Desert, California, at a luxurious resort where his estranged wife, Alice (Una Merkel), works as a tennis instructor. While waiting for Clip to catch up to him, Calvin becomes acquainted with another hotel guest, a broke investor named W. R. Gridley (Grant Mitchell). Believing Calvin is a perfect sap, Gridley uses his lovely daughter Grace (Mary Carlisle) to seduce Calvin into buying the man's unwanted hot air balloon.

With Calvin and Clip turning the tables on Gridley and pretending to be expert balloonists, It's in the Air becomes a movie about who can out-con the best. Boasting that they can break a world record, Calvin arranges for McGurk to plan a hyped-up flight funded by local advertisers. He and Clip plan to take off before the launch with the $85,000 that was raised, but of course they end up aloft in the balloon alongside Pendleton's Potke (who recognized Calvin from his photo in a newspaper). It looks like disaster for the guys, but wait - to prove himself worthy of Alice's love, Calvin's taught himself a crash course in balloon piloting. With a live radio broadcast emanating from the balloon, Calvin and Clip keep Alice, Gridley and the other anxious investors informed on whether they can survive the adventure.

As a cute, forgettable comedy-drama, It's in the Air functions well enough. MGM didn't particularly tailor this vehicle to Jack Benny's talents, however. By 1935, Benny had been a hit on the radio with his eponymous weekly program, his mannered, penny-pinching persona already taking shape. While the role of weaselly Calvin Churchill wasn't too much of a stretch for Benny, it was vaguely written enough so that any of a number of actors could have played it. Benny adds a sinister touch, however, making me wonder whether he could have played a real heavy if given the chance. Enticing as the prospect of Benny and the marvelous Una Merkel as man and wife sounds, they don't get very much screen time together here - which is but one of this film's woes. Most of the story concerns itself with Benny's dealings with the annoying, one-note Healy (somebody at MGM must've really liked this guy). As epitomized by the recurring gag of Healy flummoxed by a simple "catch the hook on the rubber band" wooden toy, this movie wears out its welcome pretty quickly with repetitive, silly nonsense. 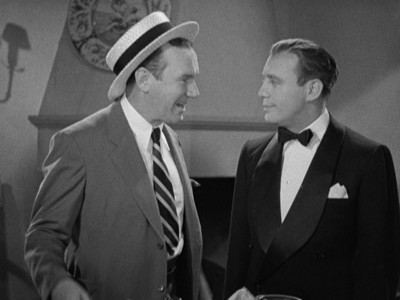 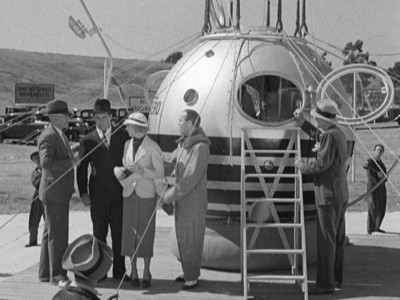 The Warner Bros. Archive Collection made-to-order DVD edition of It's in the Air contains a nice looking 4:3 aspect ratio image. The image was taken off a worn yet solid looking, well-preserved print with sports a slight amount of dirt and white specks. Although one scene near the end contains a fair amount of jitter, the picture is remarkably stable and clean-appearing considering its age. The black and white photography tends to appear somewhat blown-out at the lighter end of the scale, although in general it's a pleasant looking image.

The disc is furnished with the film's mono soundtrack in an adequate mix which has the expected, occasional pops and clicks. Some distortion can be heard in the film's louder segments, although for the most part it's a decent track. No subtitles are included.

The disc only contains the film's Theatrical Trailer, which seems to have given the entire plot away.

With Benny involved, it should've been funnier - as a shyster who cons his way into piloting a balloon to record heights, Jack Benny gives a little distinction to the otherwise logy, laugh-free 1935 comedy It's in the Air. It's worth a peek for the star's fans, and that's about it. Rent It. 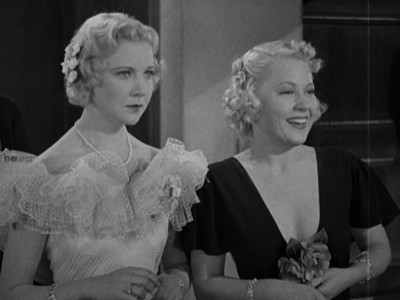 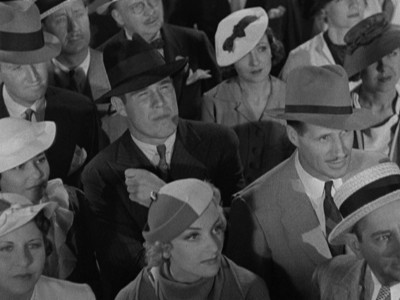