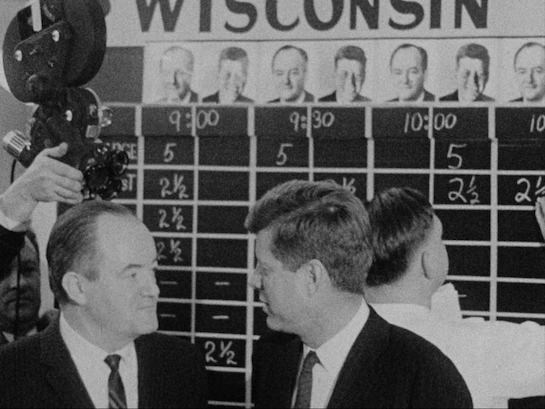 There are many different names for it. Direct cinema. Fly-on-the-wall filmmaking. Cinema vérité.

Having spent time as a reporter for Life magazine, Robert Drew became convinced that there had to be a way to push journalism forward through the use of motion pictures. And not like TV news was already doing it. Bulky cameras and complicated lighting set-ups sucked all the spontaneity out of trying to capture an event. Newsreel cameras were lightweight but they were not set up to effectively sync with sound. Yet. Drew pushed to get new equipment made that could allow the cameraman-journalist-witness to capture sight and sound while being more inconspicuous than he had ever been to that point. Of course, by modern standards, this new equipment is still fairly bulky and hard-to-ignore, but it was like shackles had been thrown off for Drew and his collaborators, including nascent documentary legends like D.A. Pennebaker, Albert Maysles, and Richard Leacock.

The most striking and rightly most famous shot from the Drew Associates' 1960 debut documentary Primary is a hand-held wide-angle shot of then-Senator John F. Kennedy, confronted by an auditorium packed with supporters. As Kennedy tries to make his way through the crowd to the stage at the far end of the building, shaking hands and sharing smiles, the camera follows right behind him, slightly above his head. Needless to say, this sort of shot would never have worked with the traditional 100-plus-pound camera rigs that documentary filmmakers were typically using before this. This kind of freedom is easy to take for granted in an age where feature films get shot on iPhones, and some modern viewers are surely going to look at Primary and wonder what's the big deal. Fortunately, while Primary's loose shooting and you-are-there intimacy was kind of its main selling point half a century ago, this approach delivers far more than just a gimmick when viewed today.

Of course, it helps that one of Primary's two main subjects became one of the 20th century's most popular, fascinating, and tragic figures. John F. Kennedy, first seen in Primary as a candidate canvassing the state of Wisconsin in hopes of beating out fellow senator Hubert Humphrey for the Democratic nomination, returned as the subject of three other films from Drew Associates over the next three years; this quartet has now been collected in the excellent new Criterion Collection package, The Kennedy Films of Robert Drew & Associates. In this context, Primary seems like it would inevitably be weighted in Kennedy's favor from the start; however, Drew claims in one of the bonus features that he was more for Humphrey when the film was made. When re-examined with this knowledge, it becomes apparent that Kennedy's natural magnetism -- his star quality -- is a major reason that Primary seems more like his film than one he is sharing with his competitor.

For most of Primary, Drew and his crew follow Kennedy and Humphrey as they make many campaign appearances of the type we've all grown accustomed to: lots of hand-shaking and speech-making. Humphrey is a Midwesterner who seems to have a natural knack for chatting with farmers and "regular folks," although as we glimpse him prepping to make a local TV appearance, it becomes apparent that he is also acutely aware of how he is presenting himself at all times. He's an old pro at the politics game, in other words, but one who reads as a little too traditional in the film. Kennedy is no less a strategist or a showman, but his energy is different: he feels younger and more modern. While he has a bit of an uphill battle fighting against his credentials as a rich-kid Easterner, he comes across as appealingly genuine.

The next film, Adventures on the New Frontier (1961), is a TV special that picks up with Kennedy in the Oval Office, after his first six weeks as president. Drew reportedly wanted to be allowed to shoot with Kennedy during the midst of a crisis, and this special was intended as a kind of trial run to see if the president could do the work he needed to do with D.A. Pennebaker's camera following him around all day. The end result is a mixed success, as Kennedy and his staff seem to genuinely ignore the camera and go about their work as normal, but the footage is not exactly explosive. There are definitely fascinating stretches, as we see the burden of the president's unrelenting workload, which includes efforts to ameliorate poverty in West Virginia and to stave off Communism in Africa. When the president's sister comes by to get some autographed pictures for her kids, he laughingly admits to going into autopilot and beginning to inscribe "Best Wishes" to his niece instead of something personal.

The film includes sequences in Ethiopia (following the new ambassador to Africa on his goodwill mission), in West Virginia (examining the poor conditions for many of the out-of-work miners there), in Wisconsin (flashing back to footage from Primary -- hey, it never got a proper TV run originally, so why not?), and at JFK's inauguration. These segments help to flesh the special out somewhat, but they don't distract from the fact that Drew didn't manage to score the big juicy story he was hoping for. Adventures on the New Frontier has great time capsule value, especially for the unguarded moments it presents of President Kennedy, but it's easily the weakest link in the collection.

The best film in the batch is 1963's Crisis: Behind a Presidential Commitment. After a few different attempts to get in to film the Kennedy White House in crisis mode, Drew Associates were finally allowed access during a particularly heated moment in the struggle for civil rights. Despite a federal order, Alabama was the last state in the U.S. to integrate its universities. Governor George Wallace declared that he would stand in front of the door to the University of Alabama's to prevent two black students, Vivian Malone and James Hood, from enrolling. Coming on the heels of a full-scale riot that occurred when the University of Mississippi was integrated, the White House realizes they have to be somewhat delicate and very crafty in dealing with this situation. Attorney General Robert Kennedy and his deputy Nicholas Katzenbach are the prime movers this time, as they must try to think five steps ahead of Wallace -- and a potential crowd of bloodthirsty racists -- just to make sure some kids are allowed to go to school.

The way these events are covered is truly impressive. Drew has a crew with the Kennedys at the White House, one with Katzenbach and the federal marshals in Alabama, and even one with Governor Wallace. It's certainly hard to imagine a film production getting as much unfiltered, authorized access to major political figures during a potential flashpoint these days, and it gives this film an unparalleled immediacy and scope. Leacock mentions in the bonus material on the disc that he had no way of knowing if someone was actually filming the other sides of the phone conversations he was shooting, but thankfully Pennebaker was. The phone sequences capture not only the intense pressure that these men are under as they cook up their strategy, but also reveal small unexpected human moments, such as when Robert Kennedy puts his little daughter on his office phone to talk to Katzenbach, and she asks him why he's on the phone right now and is it because he is over at her house.

The final film in the set, Faces of November (1963), is a dialogue- and narration-free 12-minute short, filmed at Kennedy's funeral. It captures the sullen, shocked faces of the gathered onlookers and some of the family members we've seen before under different circumstances. It's a quiet film that reveals Drew's unvarnished journalistic approach also has an enormous capacity for poetry. 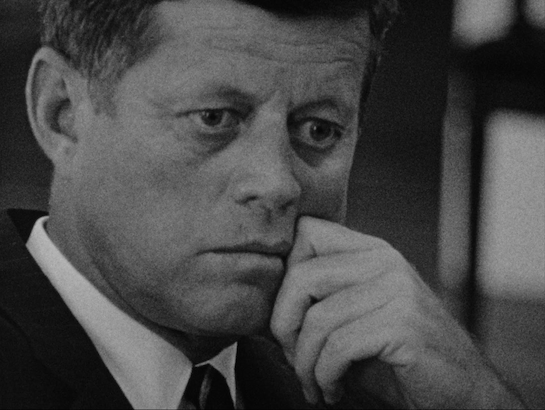 The Blu-ray
The Kennedy Films of Robert Drew & Associates comes packaged with a booklet featuring an essay by Thom Powers.

The Video:
Somewhat ironically, in one of DVD Talk's reviews of the Docurama DVD set of Robert Drew-John F. Kennedy Films, the reviewer theorizes that if someone lavished tons of attention on these films and cleaned them up, they would probably still look pretty poor. Presumably, he didn't foresee that Criterion would be the folks lavishing the attention. Now, I will admit that these AVC-encoded 1080p 1.33:1 transfers are not utterly clean and perfect: there are some scratches, specks, and instability that must have just been too pesky to completely eliminate. But in terms of clarity and contrast... wow! The 2K restoration job here is absolutely outstanding. Especially considering that many of these films were initially seen only on broadcast TV, I'd imagine that these transfers probably represent the best these films have ever looked.

The Audio:
Apart from inconsistencies inborn in the original run-and-gun location recordings, the LPCM mono audio presented here is clean and satisfying, with no distracting hiss or pops. English SDH are provided on the main films, but not on the supplements.

(HD, 26:53) - Primary was intended for TV broadcast, but it didn't manage to get picked up by any stations. Apparently, there was a brief moment when it seemed like the doc might get on TV if its running time was chopped in half, so Leacock reportedly shut himself in an editing room for a night and took a crack at making a half-hour version of the film. This shorter cut makes an interesting comparison to the original version, managing to maintain a lot of the best moments from the hour-long cut while altering the overall tone of the piece with its quicker pace.


Final Thoughts:
This collection is a must-own both for history buffs and those interested in the development of documentary film. Criterion has done a wonderful job, not only in remastering these landmark films, but also in providing thoughtful and thorough supplements which explore both the groundbreaking techniques the Drew Associates filmmakers were using at the time and the greater historical and political context in which these films were made. Highly Recommended. 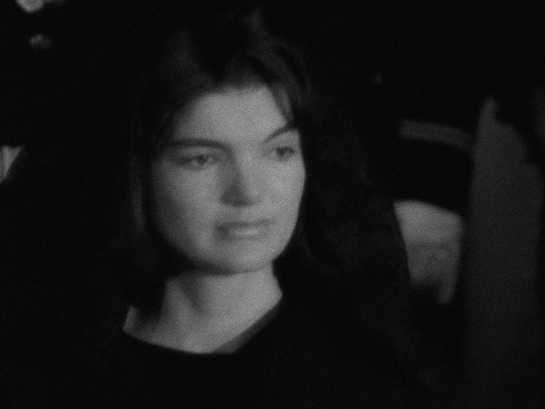