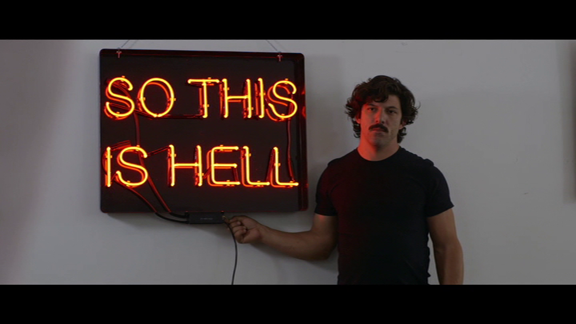 The Strongest Man is an appealing indie comedy from first-time writer-director Kenny Riches. Although it's populated with a small, quirky cast of characters, you could say that the real star of the movie is the city of Miami, with all its glitz, grit, mixed cultures and contradictions. Released on DVD from Kino Lorber, the film has its fair share of flaws but is worth checking out for fans of offbeat, intimate, dialogue-driven tales.

While the milieu of The Strongest Man might be overly familiar to those who watch a lot of indie films (lots of static, symmetrically composed shots, a cast of disaffected, ennui-filled characters), Riches invests enough humanity in the story to make it worth seeking out. The movie follows a Cuban-American construction worker living in Miami with his small circle of quirky friends. Beef (Robert Lorie) is a stocky, physically strong yet somewhat child-like personality who likes nothing more than hanging out with his mellow Korean buddy, Conan (Paul Chamberlain), and riding around Miami on his prized gold-plated BMX bike. Like Conan, still uneasily living with his parents and obsessed with the approval that trophies bring, Beef is a restless soul searching for an indefinable something to give his life some purpose. Enter Illi (Ashly Burch), Beef's free-spirited neighbor. Illi's invitiation to see the flaky self-help guru employed by her wealthy aunt sends Beef and Conan on a journey to find their spirit animals, a mission they take all too literally as they chase down every chicken (Beef) and dog (Conan) they can find. In the meantime, Beef finds his prized bike has been stolen and confronts his most feared inner demons in the process of getting it back.

Though it ends up taking too much time to tell a simple story (trimmed by 15-20 minutes, it could've been excellent), The Strongest Man ends up being quite the charmer with an appealing cast and terrific use of myriad diverse Miami locales. Kenny Riches appeared to have shot this one on the cheap, using his friends as cast and crew. Instead of coming off like a vanity project, however, it has a casual kind of intimacy missing from most mainstream-type films. Beef, Conan and Illi are all interesting characters grappling with what maturity means and finding their place. Amid the barrios, funky neighborhoods and sterile upscale condos, the characters feel as if Miami is as good a spot as any for welcoming misfits like themselves.

The Strongest Man strikes an intriguing balance between dry reality and the fantasy of the characters' imaginations. While the film is mostly spoken in English, the character of Beef narrates in his native Spanish. His fears are visualized with humanoid creatures covered in what appears to be magnetic tape, while their eyes glow in the night. As with the portrayal of Beef's friend, Conan, it's done with a measure of fancifulness yet also a lot of poignancy.

The story also delves into the class divide in wealth-driven cities like Miami, although here's where The Strongest Man falters a bit. Beef does odd jobs for Illi's aunt, a flighty, wealthy patron of the arts nicely played by actress Lisa Banes. The scenes involving Banes' Mrs. Rosen are some of the funniest in the movie. Kenny Riches also intended for the guru character to be this ridiculous stereotype, although the man (named Fred) is presented in a strange way, always in shadow and spouting lame homilies straight out of the most clichéd self-help books. Unfortunately, actor Patrick Fugit (Almost Famous) gives the character a silly fake-German accent reminiscent of Mike Myers' artsy, posturing Dieter from Saturday Night Live. While Fugit's terrible accent was likely meant to show how ridiculous it is that others take this charlatan so seriously, Fugit ends up making Fred look like an unreal cartoon. For this reviewer, it's the only part of this otherwise perceptive movie that rang completely false. 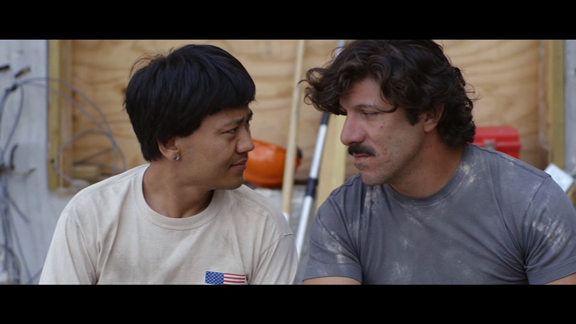 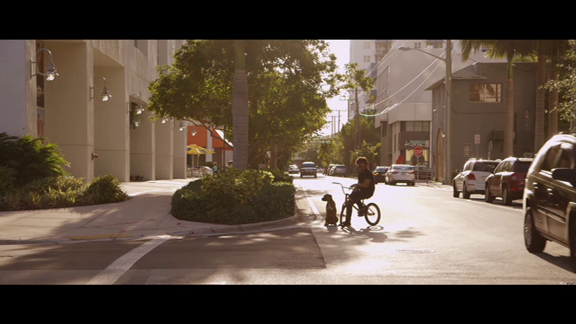 Kino Lorber's DVD edition of The Strongest Man gives the film a good visual presentation in letterboxed 2.35:1 anamorphic widescreen. The photography is pretty typical of current digital-shot indie films, with decent, saturated color and a fair amount of detail. The picture ends up looking somewhat low on contrast in several scenes (particularly the nighttime segments), although for the most part it sports pleasant visuals.

A decent 5.1 Surround mix is the only audio option on this disc. Dialogue is fine and clear, while the music (mostly found Indie Pop tracks) is incorporated in a non-obtrusive way. English subtitles are imprinted on the image during the Spanish-dialogue passages and cannot be removed.

The main bonus is a 7-1/2 minute Behind-the-Scenes Featurette with writer-director Kenny Riches explaining his motivations for creating this story and the film's production (oddly, he cites Pee Wee's Big Adventure as a strong influence). A Trailer is also included.

The Strongest Man is an unpretentious, somewhat familiar yet delightful film about a well-meaning Miami lunk in search of himself (and his stolen wheels). Those who enjoy quirky indie comedies should find this one a not-too-heavy strain. Recommended. 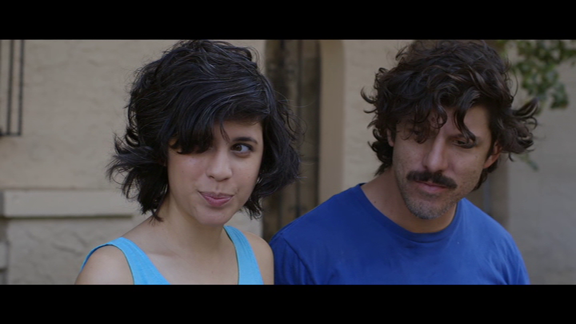 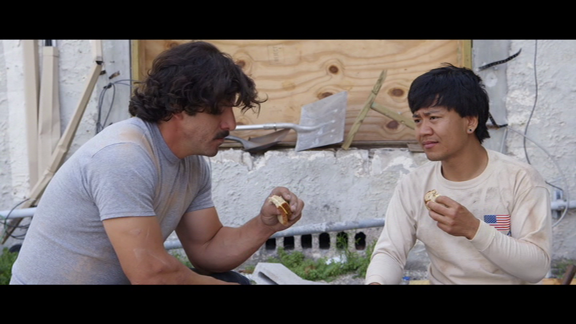