If you had told me a year ago that one of the most cynical, honest, and brutal shows about the sad state of American pop culture would come out of the Lifetime Network, I'd have laughed in your face for a whole month. After all, Lifetime is exactly the kind of empty-headed enterprise that peddles the kind of superficial fluff that Unreal skewers so satisfyingly. How did such a smart and ruthlessly contemptuous show about the soullessness and fraudulence of IQ-reducing reality shows end up on the very network that should be its nemesis? Was this an attempt by Lifetime to try to make up for the sins of its past? 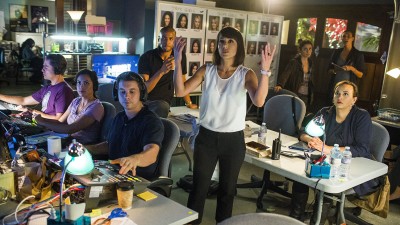 Regardless of the network's motivations, Unreal turned out to be one of the surprisingly good shows of last year. Created by a couple of producers who worked on the reality show and human cesspool known as The Bachelor during the early 2000s, Unreal tells the story of the behind-the-scenes shenanigans that take place during the production of Everlasting, a Bachelor-type show within the show. Everlasting is the brainchild of coldblooded producer Quinn King (Constance Zimmer, who deliciously ups the bitch ante of his Entourage character to 11), who treats the contestants that participate in the show like lifeless lumps of clay to be molded into whatever reality show cliché will bring in the ratings.

In order to help maximize the crazy quota of the contestants, as well as to keep the rich narcissistic playboy bachelor (Freddie Stroma) in check, Quinn brings in master manipulator Rachel (Shiri Appleby), who has a special knack for exploiting people's weaknesses for her own gain. Unfortunately for Rachel, she also suffers from a moral center. A small one, but enough for her to freak out during the previous season of the show and crash the big finale, declaring the whole thing to be fake and vapid. Now she has to come back in order make amends. At first, it looks like coming back to a job that she hates looks like hell on earth for Rachel, but eventually she begins to make peace with her evil side and actually starts to enjoy treating the mentally fragile contestants like willing chess pieces in a game they really have no stake in.

The unflinching way that Unreal uncovers the behind-the-scenes ugliness of such shows is fascinating. Most of us know that "reality" shows are as scripted as they come, but I'm pretty sure not many of us know exactly how the fabricated drama comes to be. For example, I always thought that the whole thing was staged, written and executed like any other fictional TV show. What apparently happens is a mixture of reality and fiction. The competition happens in real time, with producers scrambling in the moment to create some juicy drama, which includes spreading lies about contestants in order to instigate fights, or exploiting contestants' weaknesses to get them to cry on camera. Nothing is off limits, including dangerously messing around with some contestants' serious mental health issues, which results in a deplorable act mid-season.

The season begins without an ounce of sympathy for its characters, showing us the kind of ugliness that's required to produce such a show. Down the line, as episodes progress, we get a bit more of the conventional storylines we might expect from Lifetime, such as steamy romance sub-plots and scandalous back stabbings. But even when Unreal takes turns into slight melodrama, it never forgets the core of these characters, and manages to turn what appears to be simple titillation into profound character development. 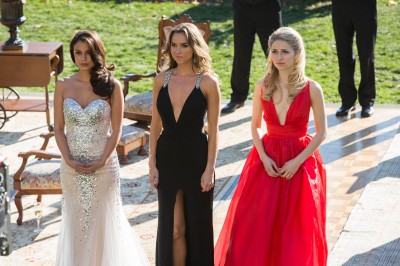 Each episode comes with a lossy Dolby Digital 2.0 track that gets the job done as far as capturing the fairly flat, dialogue-heavy sound mix of the show. I think the reason for going with a 2.0 mix was to capture a sound that's similar to the reality shows that Unreal skewers. The sound presentation is clear, and the dialogue can be heard clearly at all times. Otherwise, don't expect much.

Featurettes: Very short featurettes, which can be played with a Play All function, or by themselves, clocking in at around 13 minutes total. They mostly show the actors talk about their characters in the show.

We also get a Lifetime Movie Club Trailer.

Featurettes: 12 minutes of short promotional material that mostly focuses on how the show deals with the manipulations of the contestants. One of them focuses on a contestant who suffers a tragic outcome thanks to the characters' greed and recklessness.

Thanks to insightful and smart writing, all around terrific performances (Craig Bierko kills it as a cokehead producer), and an unflinching look at the disgusting world of reality television, Unreal is a true find for anyone looking for good drama. And for fans of the kinds of shows it criticizes, it should be mandatory viewing.