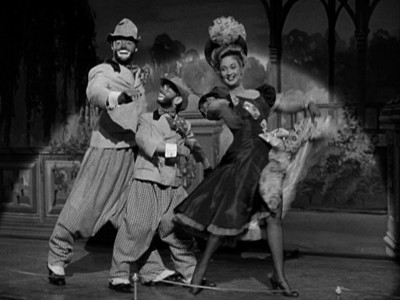 Although I didn't know much about 1948's April Showers going in to this review, I do remember it as something actress Ann Sothern cited as typical of the forgettable projects she muddled through between the '40s Maisie movies and her comeback as a television sitcom star. While this particular movie didn't do Sothern any favors, the Warner Archives made-to-order DVD proves it to be an engaging, enjoyable little flick. Co-starring the terrific Jack Carson (Mildred Pierce), April Showers brings a bit of caustic bite to a most familiar genre - the nostalgic backstage musical.

Set amongst the itinerant lives of vaudeville performers in the early 20th century, April Showers does the same thing that 20th Century Fox practically did in their sleep. This was produced by Warner Bros., however, which means it's enhanced with that studio's peculiar flair for melodrama and a gritty, urban feel. It might be my own bias talking (Warner Bros. is my favorite classic-era movie studio, and 1948 was an especially rich year for them), but that makes all the difference in the world for this particular movie. Adding interest is the fact that this story was inspired by the childhood of silent comedy legend Buster Keaton, who performed as a freakishly talented kid comic in a vaudeville act with his parents. It's a mystery as to whether the stuff that little Buster Tyme (Robert Ellis) endures in this movie shares any resemblance with how Keaton grew up, but it does result in a somewhat loony, mostly entertaining story.

As April Showers unfolds, Sothern and Carson are the headliners in a corny, old-fashioned songs-and-skits act dubbed "The Two Tymes." June and Joe Tyme are struggling to stay afloat while their 12 year-old son, Buster, is in military school, but Joe knows that something's gotta change even as the pragmatic June want to have Buster live as much outside the spotlight as possible. On a break from school, the perky Buster comes back to the San Francisco performers' hotel the Tymes live in, determined to quit school and join the family act full time. While June strenuously objects, Joe convinces her that having a singing, dancing kid in their act will add enough novelty to get them the bookings they need. As Joe correctly predicted, "The Three Happy Tymes" becomes a smashing success.

The presence of cheery, portly character actor S.Z. "Cuddles" Sakall notwithstanding, there are clouds brewing on the horizon. The Tymes run into a problem when they're booked at a prestigious Broadway theater - namely, that New York laws forbade children performing onstage. Joe attempts to convince Child Protection Services that Buster is actually an adult dwarf (Buster affects a different, weird voice, dubbed in by an uncredited Mel Blanc), but the authorities aren't swayed. The resulting act with only Joe and June ends up a resounding flop, which subsequently sends Joe into an alcohol-induced depressive funk. Meanwhile, a suave singing vaudevillian named Billy Shay (Robert Alda) opportunistically decides that he should take Joe's place in the Three Happy Tymes. Billy also has designs on June, who resists his attempt to get her to divorce no-good Joe and marry him. The family's deterioration has Buster in a shambles, Billy reveals his true self as an abusive tyrant, while June holds out hope that Joe will revert to his old, carefree self.

Bolstered by familiar tunes like "Carolina in the Morning," "On Moonlight Bay," and "While Strolling Through the Park One Day," April Showers serves as a pleasant enough diversion. While it does get bogged down in the final third with Joe's downward spiral, even those scenes demonstrate what a solid actor Carson was. Joe Tyme typified the affable lunkheads that Carson excelled at. For fans, it's a treat. Sothern does her lively best in a blah role that undermines her talents. The biggest surprise is teen actor Robert Ellis, effortlessly singing, back-flipping and cartwheeling his way through several demanding numbers. Ellis gives Buster a determined, can-do spirit without getting too cute or mawkish, in a performance that would have your average moviegoer wondering, "Who is this kid?" (Apparently he died young, at the age of 40.) Although the story ends up being a little too safe and predictable, the contributions of Carson, Sothern and Ellis at least give this cozy musical a dynamic central family unit. 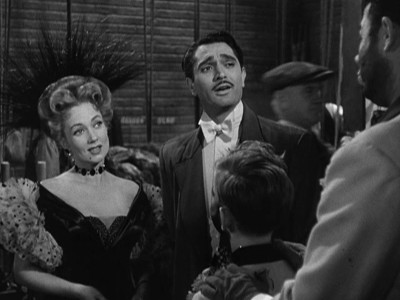 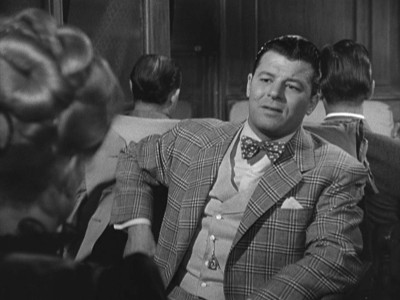 The Warner Archive made-to-order DVD edition of April Showers sports an agreeable 4:3 black and white image derived from an unrestored, somewhat weathered looking print. The image is fairly stable with a with amount of grey levels, although the light levels appeared too dark in a few scenes. White specks, dust and other debris are a constant presence.

A few clicks, pops and dropouts hamper the mono soundtrack, but generally it's a fine listen with relatively clean dialogue and little distortion. No subtitle track is included.

The disc only includes the film's Trailer, highlighting the nostalgic tunes and the story's melodramatic aspects. 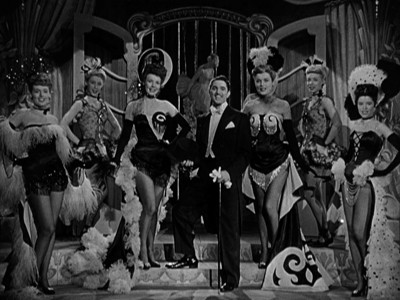 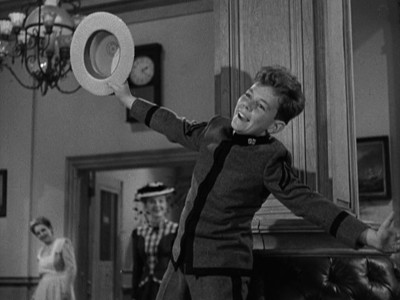