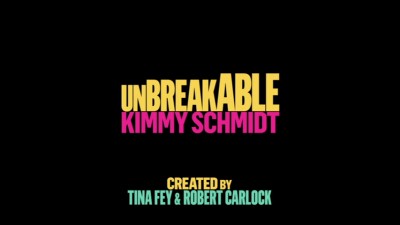 
The Show
It feels like, every decade or so, NBC gets its act together and puts together an astounding Thursday night of comedy. In the ‘80, they were the home of The Cosby Show, Cheers, Family Ties and Night Court; in the ‘90s it was Mad About You, Friends, Seinfeld and Frasier; in the 00s, you had My Name is Earl, The Office, 30 Rock and Scrubs; before giving way to possibly its creative peak: Community, 30 Rock, The Office and Parks and Recreation. All four of these shows are essentially done now, after decent runs of six or more seasons, but collectively their absence stings more than any of the shows they followed. That's why it's great that 30 Rock has returned, at least in spirit, with Tina Fey and Robert Carlock's sitcom follow-up Unbreakable Kimmy Schmidt, originally streamed on Netflix and now available on DVD.

Befitting the creators' 30 Rock background, this series is offbeat from square one. The titular Kimmy (Ellie Kemper, The Office) has spent 15 years held captive in an underground bunker in Indiana, at the hands of Reverend Richard Wayne Gary Wayne (Jon Hamm), a manipulative cult leader, and when she's freed, she decides to relocate to New York City to start a new life for herself away from the scene of the crime. It's not a great choice, as her naivety and lack of knowledge about how the modern world works leaves her a vulnerable outsider in the big city, but her time in captivity has given her coping tools and a positive spirit that renders her, as the title says, unbreakable. 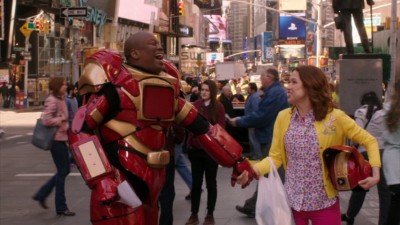 This season sets up Kimmy's world, which includes her gay, black and all-around fabulous roommate Titus (Tituss Burgess), their loopy landlord Lillian (the delightful Carol Kane) and her new boss Jacqueline Voorhees (30 Rock's Jane Krakowski); as well the challenges she faces in trying to fit in with a society she doesn't understand and working for a rich, dysfunctional family (including her new foe, Jacqueline's obnoxious teen daughter Xanthippe (Dylan Gelula.) In addition to Kimmy's struggles, there's also the possibility of romance (and the stress that goes with it), with her GED study buddy Dong, Charles, her co-worker at the Voorhees' home; and rich-guy Logan (Adam Campbell) all looking to woo her.

Unbreakable Kimmy Schmidt is essentially a serial in its storytelling, following Kimmy from her release from the bunker through to the trial of Reverend Richard, which makes up the bulk of the last few episodes. That a straightforward comedy could tell such an extended story without any notable pacing issues points to how strong the comedy is and how likeable the characters are (though it certainly helps that the creators knew many viewers would binge-watch the series.) However, the story isn't just a skeleton they hang the jokes on. The trial, which features Fey and Jerry Minor as two of the most famous terrible prosecutors ever, is actually one of the most interesting parts of the series, with Hamm simply taking over the show in defending himself to a small-town jury, while the plot takes several entertaining twists as Kimmy attempts to take some control over her life.

The DNA of 30 Rock is obvious everywhere, from Krakowski's character (a close relation to her Jenna Maroney) to the unmistakable music from Jeff Richmond, but it's the surreal sense of humor that makes the series so welcoming to fans of Fey and Carlock's previous show. Whether it's nonsensical flashbacks, the quirkiness of Jacqueline's Native American familial background or a deep dive into what could have been just a throwaway joke with a scene from the musical Daddy's Boy, you wouldn't need to be told who was behind this show in order to know its roots. The thing is, with a character like Kimmy, whose optimism and innocence read as nearly magical at times, this tone feels wholly organic for the series (whereas for 30 Rock, it imparts a delightful, theatrical artifice.)

The cast is a huge part of why the feel works for this series, starting with Kemper, whose adorable persona helps sell the character as something of a child in an adult's body, which is key to her being a misfit in this world. Few actors could pull off the lines Kimmy has to deliver with the authenticity Kemper gives them, particularly when she goes head-to-head with Xanthippe. As Titus, Burgess is the perfect partner-in-crime for Kemper, able to play all over the map in terms of emotion, busting out a beautiful singing voice at times for emphasis. Together, they are tremendous fun, combining to present the perfect mix of character traits. In addition to co-star Krakowski, whose walking-id performance once again helps heighten the sense of ridiculousness, the supporting and guest cast blends in perfectly, be it the wacky Kane (welcome in anything she decides to be a part of), the multi-layered Gelula, the ladies Kimmy spent her captive years with or an incredible Martin Short, in a part that must be seen to be believed.

It would be a shame to not point out the show's fantastically catchy theme song, a parody of songs remixed from news reports, by The Gregory Brothers, the group that invented and perfected the art. That the theme songs was a meta element of the series that had ramifications right through the final episode of the season was just an added bonus. It's also another reason why Netflix is proving a better place for television watching, as a lack of time limits allows shows to have legitimate themes. 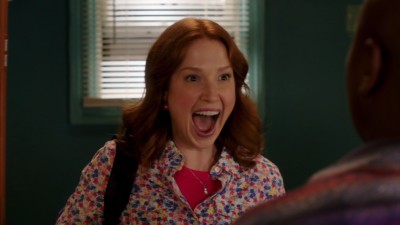 The DVDs
Packaged in a standard-width, clear keepcase with a tray, a double-sided cover with episode descriptions and a slipcover that repeats the cover art, the first season of Unbreakable Kimmy Schmidt arrives on two DVDs. The DVDs offer static, anamorphic widescreen menus with a somewhat frustrating icon-based menu that offers options to play all the episodes, select shows, adjust the setup and check out the extras. There are no audio options, while subtitles are available in English.

The Quality
The anamorphic widescreen transfers on these episodes are good, but inconsistent, with some scenes looking great, while others come off as over-saturated (particularly in the reds) and somewhat soft. Overall, the level of fine detail is good for SD, black levels are solid and the amount of aliasing is limited and not overly distracting, but it's not the finest DVD presentation.

The Dolby Digital 5.1 tracks utilize the surrounds to boost the score and offer up some atmospheric effects, but it's not the most dynamic presentation ever, coming to life mainly when soundtrack music is available, but even then the low-end has nothing really to do. Dialogue however is crisp and clean, with everything clearly understood, and the music is good across the board.

The Extras
Sadly, the only extras are a trio of previews, for Brooklyn Nine-Nine, 30 Rock and Girlfriends' Guide to Divorce. 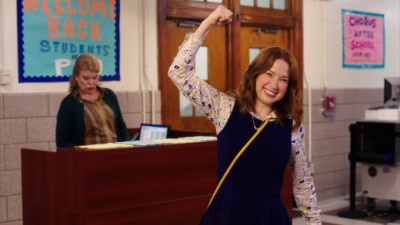 The Bottom Line
For anyone missing their 30 Rock fix, Unbreakable Kimmy Schmidt offers a more than reasonable facsimile, with a great cast, a ridiculous storyline and plenty of surreal silliness, anchored by Kemper and Burgess' odd-couple pairing. This set looks and sounds good, but misses the key reason for anyone to buy it, with no extras to differentiate it from streaming the show on Netflix, where you can watch it in high definition. It's nice to have a copy in case it ever becomes unavailable online, but this should have been a more tempting package to make any 30 Rock fans on the fence make the leap.