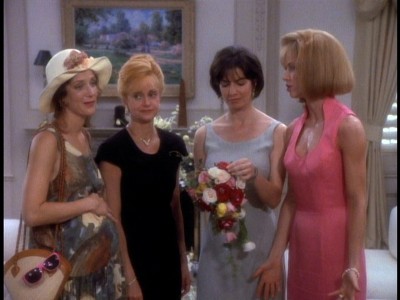 Sisters chugged along on for six seasons on NBC in the '90s, never a huge hit yet highly prized by advertisers for the female-dominated audience it attracted. Mixing heartfelt drama with goofy comedy, the show benefited from a capable cast and insightful scripts - a strawberry kiwi wine cooler thirtysomething, if you will. I remember enjoying the first couple of seasons when they originally aired, although to be honest I've never given the series a second thought until Shout Factory started reissuing the show on DVD in 2015. Except for a few minor music substitutions, the six-disc Season Three package allows us to relive all 24 episodes of Georgie, Teddy, Alex and Frankie Reed's distaff adventures as they aired in 1992-93.

Then and now, the four distinct actresses who play the Sisters served as the foundation of its appeal. Back then, I absolutely adored Swoosie Kurtz, who nailed the comedic material as snooty yet charming eldest sis Alex. Sela Ward also did a fantastic job as Teddy, the bold, smart bohemian fashion designer sister (Ward grabbed a surprise Emmy for her work on this show - although it was for Sisters' fourth season, not this one). On the other hand, Julianne Phillips was a bit of a non-entity as Frankie, the workaholic youngest sister, while I had completely forgotten that Patricia Kalember served as the fourth lead - she's actually pretty good as Georgie, the sensible sister with a stable marriage and home. Those who followed thirtysomething will recall that Kalember was a total shock in this series, playing a character who was the polar opposite of the brittle ice queen Susannah from that earlier show. Another thirtysomething alum, actress Elizabeth Hoffman, held the individual sisters' sagas together as the women's caustic mother, Beatrice.

While the presence of Kalember and Hoffman brought forth a lot of thirtysomething comparisons, Sisters was a little more generous with the loopy comedy/fantasy elements. In each episode, the sisters find themselves recalling the child versions of themselves in similar situations - a cloying gimmick that likely would have been used just once on the superior thirtysomething. This show's emphasis on silliness over drama, in fact, looks forward to the more liberally applied "women have the right to be weird" subtext of later shows like Ally McBeal and Gilmore Girls.

Aside from that annoyance, however, this Sisters season provides one absorbing fracas after another. Although series creators Ron Cowen and Daniel Lipman dropped the pre-credits prologues with the four ladies chatting in a steam room, things remain as pleasantly histrionic as ever. The Reed sisters are still living in Winnetka, Illinois, navigating the hazards of relationships, careers and - life. At the season's start, Georgie is hugely pregnant as the surrogate mother for the child of Frankie and her husband, Mitch (Ed Marinaro). Frankie's devotion to her white collar job puts a damper on their marriage, prompting her to mull over converting to Judaism and seeking couple's counseling. Meanwhile, her sister Teddy (who is Mitch's ex-wife) struggles with her fashion design business until meeting a handsome investor, Simon Bolt (Mark Frankel). Although Teddy fights to retain her creative vision under Simon's machinations, the arrangement is a success for them financially and personally (they eventually become lovers). The prim, stuffy Alex and husband Dr. Wade Halsey (David Dukes) are aghast that their daughter, Reed (Ashley Judd), eloped with her goofy bohemian film student boyfriend, Kirby (Paul Rudd). Amid all that, Georgie has the most dramatic story arc this season with her husband, John (Garret M. Brown), having his plane missing during a tense episode, along with her getting into a car accident mere days before her due date. A few episodes later, this arouses the interest of a Hollywood producer-director into filming Georgie's story as a TV movie - leading to one of the funnier episodes in this set with Georgie, John, Frankie and Alex on an eventful, celebrity cameo-filled tour of the Warner Bros. studios in Burbank ("Moving Pictures" - disc five, episode one). 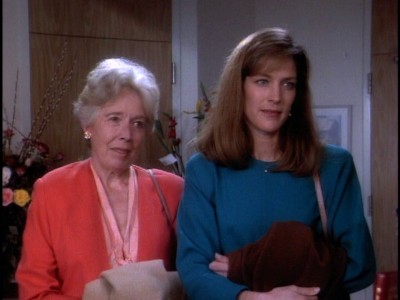 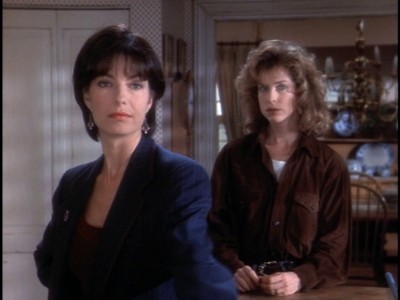 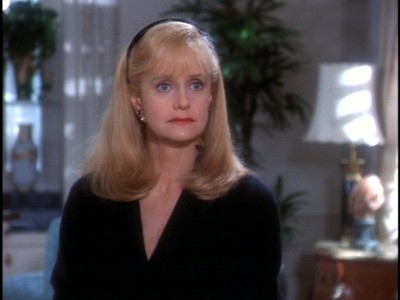 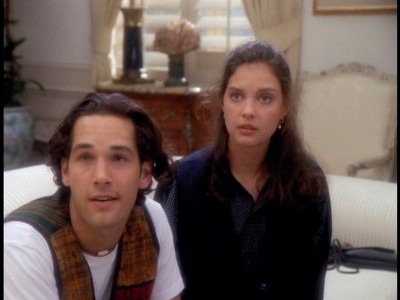 The six discs in Shout Factory's DVD edition of Sisters: Season Three come packaged in a standard-width clear plastic keep case. Four of the discs are mounted on hinged partitions, while the other two are held in place inside the case walls. As with other Shout TV-on-DVD sets, the package inlay interior is printed with a directory of episode titles, air dates and brief plot sypnoses.

Each disc in this set contains four hour-long Sisters episodes. Given the compression issues involved in packing that much info on a single disc, the visuals end up looking merely adequate - edges are overly sharpened and pixelated, colors and flat areas look splotchy, and there's a distinct lack of detail. Although casual fans of the show won't notice any problems, they could have done better, picture-wise. All 24 episodes are presented in their original 4:3 full frame aspect ratio.

The stereo soundtrack is also given an unspectacular treatment, although the sound mixing fares better than the visuals. Some of the song usage from the original broadcasts appear to have been substituted with generic music cues (the opening of the first episode has Georgie running a marathon with an imitation "Chariots of Fire" theme underscore). Those substitutions appear to be in the minority, however - Teddy's fashion show is still scored with Madonna's hit "Vogue," for instance.

Just the episodes, ma'am - no extras.

Mild dramedy, dressed up in mom jeans. The third season of Sisters offers up plenty of theatrics for stars Swoozie Kurtz, Sela Ward, Patricia Kalember and Julianne Phillips. Although the series doesn't hold up as well as other dramas of that time, it's silly enough to hold one's attention over an entire season (plus: Kurtz and Ward rock). A solid rental - put on a terrycloth robe, open up your best pint of Ben & Jerry's, and enjoy. Rent It. 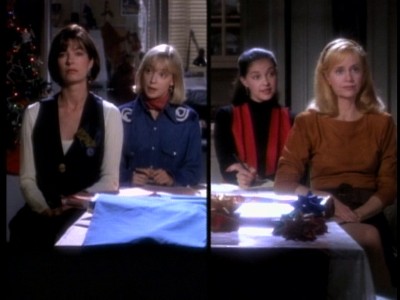 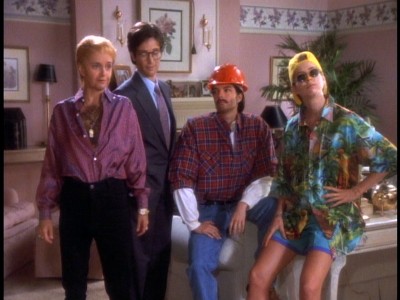