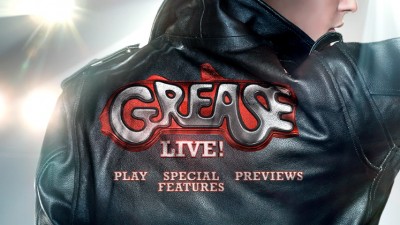 
The Movie
From the start, the deck was stacked against Dancing with the Stars alumna Julianne Hough, Broadway actor Aaron Tveit, High School Musical veteran Vanessa Hudgens and company as they brought yet another popular musical to the small screen in a live performance, simply by tackling Grease, a crowd-pleaser that's been firmly entrenched in the minds of audiences thanks to the 1978 film starring John Travolta and Olivia Newton-John. Comparisons were inevitable, and having to do it all live in one try wasn't going to make the effort any easier.

Well, the thing Hough and Tveit had on their side, from the moment singer Jessie J appeared on-screen to perform the theme song, moving through dressing rooms and across sets and interacting with the actors who would be appearing over the following hours, was the energy that comes with a live performance and the energy inherent in Grease. Despite NBC's head-start in bringing live musicals back to TV, FOX blazed past shows like Peter Pan and The Sound of Music with that energy (aided in part by including a live audience's reaction) and, more importantly, ambition, turning up the dial on the staging and creating a true spectacle.

The Romeo and Juliet-style story of Sandy (Hough) and Danny (Tveit), set between the 1950s high school girl gang of the Pink Ladies and the greasers known as the T-birds, which started on the stage before becoming far better known on the screen, mixes a lot of elements from the era, touching on car culture, teen sexuality, and what the future brings, but it's really all about the music, which helps tell the story of young love torn apart by society's expectations. Aside from the cheeky sense of humor, there's a reason why Grease has stood the test of time, and that's a collection of some of the catchiest songs ever to be sung in a musical, performed by a memorable cast of characters. 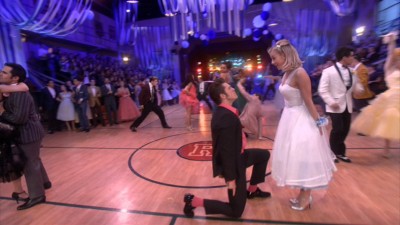 In crafting this special, the creators went big, with a massive set full of innovative staging that embraced the idea of theatricality, bringing imagination to what is easy in film, namely the transition between scenes. Thus, we get quick-change costumes and sets, like the move from the Pink Ladies' slumber party to a USO concert, or the transformation of the gang's diner into the scene of a dream sequence. Though the special sticks closely to the film, it doesn't shy away from putting its own touches on a classic, be it a new song (an ill-fitting modern pop song by Carly Rae Jepsen), a new plot path for nerdy Eugene or even a new take on the hand jive dance (which isn't exactly necessary, but not a crime either.) There are even a few nods to the original stage show that work out exceedingly well, as Pink Lady Marty (Keke Palmer) gets her number back, with the excellent "Freddy, My Love" returning, and "Those Magic Changes" making its way back into the storyline, sung wonderfully by Teen Beach Movie's Jordan Fisher and finessed into an interesting live montage.

As impressive as the production is overall, the weakest element, sadly, is the cast. No one appears as the result of stunt casting, as pretty much everyone is capable of singing and dancing at an impressive level (though Boyz II Men's version of "Beauty School Dropout" will not be remembered fondly.) However, there's a lack of emotion in many of the performances that makes them suffer in comparison with the original film. Palmer, Kether Donohue (as goofy Pink Lady Jan) and Ana Gasteyer (playing the principal) are the best at living up to their predecessors, while Elle McLemore manages to capture the spirit of obnoxious Patty Simcox, while doing something different with the part. Hudgens more than delivers the emotionally-vulnerable side of bad-girl Rizzo (thanks largely to a fantastic performance of "There Are Worse Things I Could Do") but she doesn't quite get there with Rizzo's rough edge. Similarly, Jepsen is adorable as Frenchy, but doesn't express the quirkiness provided by Didi Conn in 1978. On the plus side, there's some fun fan-service in the film, with Conn appearing as the waitress who has a heart-to-heart with Frenchy, and film Doody Barry Pearl playing a part of the National Bandstand crew.

The main problem however is with Tveit and Hough. Both have their bonafides, Tveit having worked with Grease Live! music director Tom Kitt on Broadway's Next to Normal and Hough being well known for her dancing skill, but as Danny and Sandy, they never quite click, lacking in the chemistry the roles need. Tveit lacks the emotional punch Travolta brought to songs like "Sandy" or "Greased Lightning," and Hough is outshined by others in the cast, which can't happen with Sandy. Interestingly, both pull back on the high notes remembered from the end of songs like "Summer Nights" and "Hopelessly Devoted to You" (which Hough otherwises nails.) Whether this was an attempt to differentiate the special from the film or avoid the risk of trying such notes live, it was a notable distraction for fans of the film.

Impressively, despite such elaborate staging and a massive logistical-nightmare of a set, there were no major flubs in the live presentation, outside of the audio dropping out during a major musical moment (fixed here on DVD) and the less-than-engaging race at Thunder Road, which was a good attempt at overcoming limitations, but which doesn't really work. You can still see where they nearly fell off the live-TV highwire, like a risky pie-throwing gag that doesn't quite land and a near-disaster involving a people-mover and a curb, but this disc stands as a testament to a masterful live effort. Those interested in the behind-the-scenes of production will want to watch the big dance scene repeatedly to try and catch the cameras that seem to invisibly glide in and around and over the dancers. Though some are smartly camouflaged in the plain sight, they managed the near impossible of having cameras almost everywhere without breaking the reality of the scene.

When this special aired live, it really was something special, because no one knew what was going to happen. Now that it is available on DVD, just like the original film, it has to stand up to comparison with the longtime favorite, and it simply can't, thanks to a number of factors. That's not to say it doesn't have its own charms, since it's a fantastic example of live production, with some imaginative takes on well-known material. But when you think of Sandy and Danny, it's going to be Newton-John and Travolta that you want to see.

The DVD
Grease Live! is a one-disc release, packaged in a standard keepcase. The DVD has a static, anamorphic widescreen main menu, with options to watch the show and check out the special features (so no chapter or song selections.) There are no audio options and no subtitles. 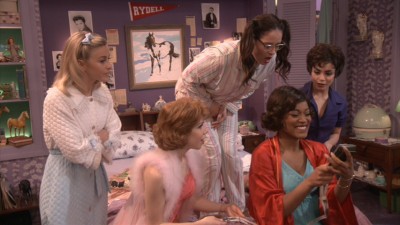 The Quality
Comparing the HD broadcast and this SD release, and accounting for the downshift in resolution, this anamorphic widescreen image is darker than what was shown on TV, but otherwise it's a good representation of the special. Fine detail is decent, though occasionally things can get a bit soft, and color is good throughout, as are black levels, with minimal crush. There's some minor aliasing that crops up in areas with fine lines (like on actors like Hough with lighter hair) but digital distractions are not a major concern.

It's bad enough that we're not getting an HD version of the special, but to not offer a surround mix is just insulting, leaving viewers with just a Dolby Digital 2.0 track.From the opening song, it's clear that the result is a slight flatness to the overall sound. It also sounds like the audience was brought down a bit in the mix, giving more presence to the actors and music. The songs sound fine, but they are lacking some of the oomph they had when they aired live, while the dialogue is clean and clear.

The Extras
For a quickie release like this, there's a surprising amount of bonus content, though nothing here goes in-depth on elements like the intricately staged dance contest (a feat of filming technique.) Things get started with "Without a Net: Performing Grease Live!" (5:18). The main cast, and some of the principal creative staff, share their thoughts about the excitement that comes with performing live and why they wanted to do it, as well as some of the challenges faced and techniques used, while rehearsal footage rolls underneath the interviews.

"Becoming the ‘T'-Birds and Pink Ladies" (4:27) gives the cast a chance to discuss the inspiration that comes with the original film, and talk about their characters in a brief featurette. It's followed by "Greasin' Up the Joint" (4:39) a look at the sets and costumes, with a focus on how the crew approached the idea of making their version of Grease something different.

"Be-bop, Swing, and Jitterbug: The Choreography and Dancers of Grease Live!" (4:22) is exactly what the title says, showing choreographer Zach Woodlee and his dancers working on their moves, along with info on how director Alex Rudzinski choreographed the camera work to go alongside the dancing. There's also a demonstration of the special's variation on the film's famous "hand jive".

The longest extra at 6:20, "What Was Your First…?" is the fluffy kind of extra you might expect from a special like this, as the cast plays with those old-school, folded-paper fortune tellers to play a game where they reveal various firsts from their youths, including the details of Jepsen's first kiss, Hough's Skittles-induced brush with the law and some of the guys' experience with dance belts.

The extras wrap up with the 2:48 "My Favorite Grease Moment", which offers a little love for the original film, as the cast remember their best-loved bits, illustrated with clips.

A handful of previews are also included on the disc. 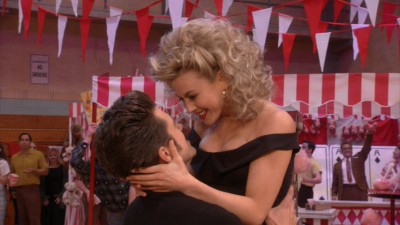 The Bottom Line
Beyond ambitious, Grease Live! set a new standard for the modern renaissance of live television productions, even as it fell predictably short of the entertainment value of the 1978 film. It's still a fun two-plus hours (freed from the advertising and interstitials of the original broadcast.) The presentation here, however, especially with the lack of a Blu-ray release, is a genuine disappointment with sound and video that doesn't match the effort that went into the show (and is miles behind the version that aired.) One the plus side, there are a decent selection of extras, even though more detail on the production process would have been appreciated. Combine all this, and it's unlikely Grease Live! would ever be chosen over the copy of Grease next to it on the shelf, but on its own, it's certainly a good time.