Timeless // Unrated // January 19, 2016
List Price: $44.99 [Buy now and save at Amazon]
Review by Stuart Galbraith IV | posted March 1, 2016 | E-mail the Author
The Saint - Seasons 3 & 4 is a budget-priced repacking of episodes from the popular Roger Moore series, previously released by A&E way back in 2001. Now licensed to Timeless Media, there's more bang for the buck, though the masters are the same, rather old and not particularly impressive, and one would prefer to see the show's excellent production values shine on Blu-ray instead. (A few Saint episodes, along with other ITC shows, were released to Blu-ray in the UK under the Network label in several volumes, as retro-ACTION!.)

The program was internationally popular, second only to The Avengers among British shows, reportedly earning profits in excess of 350 million British Pounds for ITC. It also cemented Roger Moore's screen persona: suavely handsome, articulate and humorous. He almost certainly modeled that persona after David Niven, a close personal friend whom Moore greatly admired, and like Niven, Moore rarely strayed far from it once established.* In both his subsequent series, The Persuaders (1971-72), and during his tenure as James Bond (1973-1985) he played those characters as virtually interchangeable with Simon Templar, the Saint. Indeed, he actively fought efforts to move his Bond a bit closer to the more violent and ruthless character of the Ian Fleming novels, famously resisting to film what turned out to be For Your Eyes Only's best moment, when Bond kicks the car belonging to an assassin (with the assassin inside) off the edge of a cliff.

The Saint was produced during its black-and-white years by New World Productions, presumably a combine of executive producers Robert S. Baker and Monty Berman, the Charteris estate, and ITC. For the later, color episodes Roger Moore became another co-owner and the production company was rechristened Bamore Productions. Effectively, though, it was an ITC show, and like other ITC productions The Saint was shot in 35mm and notable for its extremely good production values.

Seasons 3 & 4 originally aired during 1964-65, though actually shot as a single, 32-episode production block, then split into two distinct seasons. By this point the influence of the 007 movies and the increasingly silly spy genre generally were beginning to influence The Saint, which started out as a more conventional if lighter-hearted mystery show. Indeed, it was sort of the Ying to Danger Man's Yang. That Patrick McGoohan-ITC spy series had resumed production after a four-year gap, very much as a darker, more cynical alternative to the frothier Saint. (McGoohan, incidentally, was reportedly offered the role of Simon Templar while Danger Man was in its extended hiatus.) 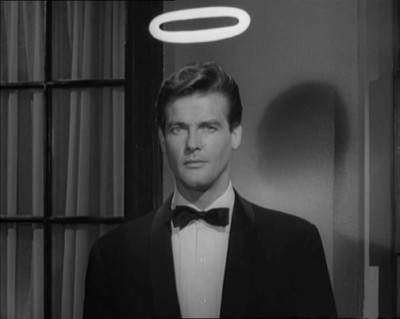 Charteris's character, created in 1928, was first adapted into a film, The Saint in New York (1938), by RKO Pictures in Hollywood. 20th Century-Fox had a virtual lock on B-mysteries at the time (Charlie Chan, Mr. Moto, etc.), and a Saint film series was one of several attempts at duplicating their success. Louis Hayward played Templar in that film, but another actor, George Sanders, became more famously associated with the role, playing Templar in the first five of the seven films that followed. Hayward briefly returned to the role for The Saint's Return, a 1953 Hammer film, but when Moore began playing Templar in 1962 it was an immediate success and he remains the iconic interpreter of the character. Charteris described Templar as a "buccaneer in the suits of Savile Row, amused, cool, debonair, with hell-for-leather blue eyes and a saintly smile," all of which except possibly the last point describe Moore perfectly. (Moore's smile is more that of the cat that swallowed the canary.)

In the RKO movies Templar was a gentleman thief with Robin Hood-like leanings, pursued by long-suffering friend-rival Inspector Henry Fernack (Jonathan Hale). On the TV show Templar is more effervescent, cultured, and worldly, much like David Niven's Sir Charles Lytton in the first Pink Panther movie, made almost simultaneously, or Cary Grant's gentleman cat burglar in To Catch a Thief (1956). By Seasons 3 & 4 there's little trace of Templar's feloniousness. Rather, almost always he's emphatically on the side of truth and justice recovering, for instance, a stolen million-dollar diamond on behalf of the Louvre.

Filmed in 35mm, The Saint is handsomely produced, in line with efficient but inexpensive British feature films from the period, like the contemporaneous Edgar Wallace movies. Like other ITC shows, jet-setter Templar travels all over the European Continent and, occasionally, places like Africa and the Middle East. Unlike Moore's later The Persuaders, The Saint never left England, effectively using a combination of well-appointed backlots, optical effects, and extremely good lighting and cinematography that together allow a suspension of disbelief.

The show itself is light and entertaining in the manner of Moore's later Bonds, minus the gadgets, product placements, and comic-book action. Die-hard classic British TV fan and friend Jeff Flugel prefers the color episodes of The Saint that immediately follow season four but I think I prefer the slightly more grounded black-and-white episodes of seasons 3 & 4. I must admit to also greatly preferring Patrick McGoohan and Danger Man over The Saint, especially Danger Man's taut first series of 30-minute shows.

Using old masters, The Saint - Seasons 3 & 4 looks okay, not great but certainly acceptable. The shows are spread across eight single-sided DVDs crammed into casing the size of what in the earliest days of DVD would have held no more than two discs. That might explain why my set arrived damaged beyond repair, the thin-layered plastic crushed and the complex spindle holding the discs in place rendered useless. In short, don't expect it to hold up to any mishandling. Episode titles and their location are helpfully noted inside the sleeve. The Dolby Digital mono is fairly good. No subtitles and the discs are region 1 encoded.

Supplements, apparently done for earlier (possibly UK) releases, include two commentary tracks: Jane Merrow on "The Happy Suicide" and Roger Moore, Robert S. Baker (who died in 2009), and Eunice Gayson on "The Saint Bids Diamonds." Also included is a behind-the-scenes featurette about Moore's work on the series as occasional director.

Still enjoyable and now much more reasonably priced, The Saint - Seasons 3 & 4 is Recommended. So now where's the Blu-ray?

* Moore, did, however, on rare occasions demonstrate that he could be a fine actor, particularly in the films The Man Who Haunted Himself (1970), Gold (1974), and North Sea Hijack (aka ffolkes, 1979).