It was an unusual spin-off, maybe the first of its kind. Mary Tyler Moore (1970-77) was the popular, Emmy-winning sitcom, its format heavily influenced by the earlier The Dick Van Dyke Show, which co-starred Moore. WJM-TV's Six O'Clock News producer, Lou Grant (Ed Asner), had been one of its most popular characters (Asner won three of seven Emmy nominations). That series was a half-hour "three-camera" show, shot on film before a live studio audience.

Lou Grant, conversely, was a one-hour drama, a "single camera" program shot like a movie, with no studio audience. During the run of Mary Tyler Moore, Lou often spoke about his past career as a newspaperman, so it made sense that, after being fired in the final episode of Mary Tyler Moore, Lou would move west to accept the job of city editor of the (fictional) Los Angeles Tribune. 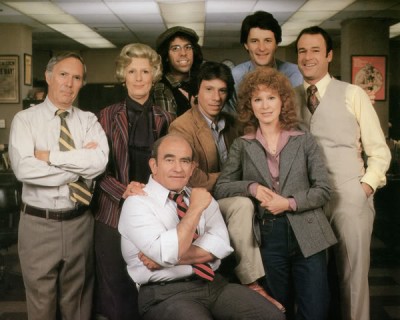 During Lou Grant's run, none of his old chums from Mary Tyler Moore ever paid Lou a visit, but that would have been a distraction hard to pull off. Nonetheless, one of the fascinating things about Lou Grant is how, despite the switch from half-hour sitcom with live audience to one-hour filmed drama, Asner very clearly is playing the same character.

A lot of people remember Lou Grant as television's answer to the popular and acclaimed All the President's Men (1975). There's some truth in that, but Lou Grant is less about reporters chasing a topical story than it is about something American television rarely attempts to realistically dramatize much at all: ethics in journalism. In "Nazi," for instance, Lou and the paper's staff struggle with the decision to "out" a local American Nazi Party leader by reporting that he is, in fact, Jewish. In another, the paper delicately but determinedly advocates the removal of an esteemed judge they believe incompetent due to age-related decline. In practically every Lou Grant, in fact, Lou and others agonize over seemingly trivial choices that might compromise theirs and their paper's integrity.

In this sense, watching Lou Grant almost 40 years after its premiere is as depressing as it is exhilarating. Like writer-director Samuel Fuller's superb Park Row (1952), Lou Grant captures the narcotic excitement of journalism at its best. Fuller's movie was set 130 years ago but, given the current state of print and television news reportage, even Lou Grant has practically become a quaint period piece, nostalgically looking back into a past long-gone.

When it was new, however, journalism teachers across the country would videotape episodes to show students, while working newspaper reporters and editors admired its unusual verisimilitude, rushing home to catch it.

The show exemplifies the combined talents of MTM's James L. Brooks and Allan Burns, with Gene Reynolds, one of the producers of M*A*S*H, reflecting those series' influences in addition to All the President's Men's realism. Perhaps most impressive of all is how deftly Lou Grant interweaves wry, character-driven humor seamlessly into the drama. Where shows like M*A*S*H had clearly defined "A" story dramas running alongside "B" story comedy relief, Lou Grant integrates the two effortlessly. In another early episode, for instance, the angry brother of a man killed in an attempted robbery takes the city newsroom hostage. It's a tense third act, strongly hinting that the hostage-taker will never come out of it alive. And yet sprinkled throughout are funny little asides about how human beings might react in similar situations.

Art Donovan: "There was a small fire over on Melrose. I sent Rosenthal. He put it out."

Lou Grant: "Good man, Rosenthal. We ought to send him to the Middle East."


At the beginning of the series, unemployed Lou accepts a job offer from old friend Charlie Hume (ex-radio star Mason Adams), managing editor of the Trib. Early episodes wisely show Lou struggling to gain confidence within the organization; in meetings with other editors he's usually soft-selling city beat material to Hume, and both men are awkward around the newspaper's Katharine Graham-like publisher, Mrs. Pynchon (Nancy Marchand). Also during this first season, middle-aged and lonely (but no longer fat; Asner had lost a lot of weight by then), Lou sheepishly introduces himself to women his age at the grocery store, at the local diner. Despite the prestigious job Lou's income is obviously limited, and additional humor is derived from his clumsy attempts to decorate his rented house.

Actor Robert Walden, who had played CREEP operative Donald Segretti in All the President's Men, here plays Joe Rossi, a Carl Bernstein-esque reporter that Lou trusts with most of the toughest assignments, less so with personal matters as his strengths as a reporter work against him with his personal life. Rossi's female counterpart was originally to have been Carla Mardigian (Rebecca Balding) but, for no clear reason, after three episodes she was replaced with actress Linda Kelsey as Billie Newman. (Balding immediately followed Lou Grant with a string of higher-profile roles, including a prominent recurring part on Soap.) Both actresses were fine but Kelsey, already a veteran of both Mary Tyler Moore and M*A*S*H, really clicked as the former "women's section" reporter who quickly proves herself as Rossi's equal on the city beat. Rounding out the cast is Daryl Anderson as "Animal," the city room's hippie-like photographer.

The acting is often quite remarkable. It's still pretty dazzling to watch scenes like the one in "Judge" where Mrs. Pynchon, Lou, and Charlie have a prickly lunch with a respected judge (Barnard Hughes) threatening to sue the paper for libel. The scene goes on for maybe six or seven minutes, with everyone trying to be pleasant, polite, and reasonable, but the meeting nonetheless unravels despite everyone's attempt to keep things civil. Each actor brings all kinds of marvelous little reactions and bits of business to their character.

Lou Grant ran five remarkable seasons before it was abruptly cancelled for political reasons better discussed in a review of Season 5. One dearly hopes DVD distributor Shout! Factory does a complete run.

Shout! Factory's DVD of Lou Grant: The Complete First Season generally looks good. It appears derived from a somewhat older but thankfully not ancient video master. It's far superior to, say, episodes of Barnaby Jones or Cannon but not nearly as good as Hawaii Five-O or The Streets of San Francisco, if those ‘70s shows are any comparison. All 22 episodes appear uncut and not time-compressed (some contain the original preview teaser at the beginning), and are on five single-sided DVDs. The Dolby Digital mono is fine, and the discs are region 1 encoded.

The lone extra is a good one: an interview with star Ed Asner, still amazingly active at age 86. (Check out his credits on the IMDb: sixteen projects in 2016 alone!)

Unlike most ‘70s dramas which, even when they hold up, very much play like "older" television shows from another era, Lou Grant is at once both sadly dated in the journalistic evolution sense, but dramatically as riveting as today's best dramas. Don't miss it. A DVD Talk Collector Series title.