King and Four Queens, The

Olive Films // Unrated // May 24, 2016
List Price: $25.99 [Buy now and save at Amazon]
Review by Stuart Galbraith IV | posted April 17, 2017 | E-mail the Author
The King and Four Queens (1956) was Clark Gable's third independent movie after many years at MGM, and his first and last attempt at producing features himself. (He co-produced with actress Jane Russell and her husband, former NFL MVP Bob Waterfield.) The ingredients are all there, but this unusual Western, directed by Raoul Walsh, has an inconsistent tone and stubbornly refuses to gel into something palatable. Most of it confines Gable's character to a dilapidated ranch with four mostly sex-starved young women and their dictatorial mother-in-law, but as the tense drama-mystery it seems to think it is the picture just doesn't work. 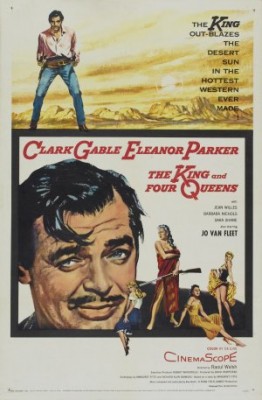 The movie gets off to a good start, as conman Dan Kehoe (Gable) outrides a trio of lawman by charging his horse down an impossibly steep mountain slope. Arriving in town, he stops by a saloon where the bartender (Jay C. Flippen) warns Kehoe to stay away from nearby Wagon Mound, where crack shot Ma McDade (Jo Van Fleet) is fiercely protective of her land, her four daughters-in-law, and the $100,000 in gold supposedly buried on the property, gold taken in a stagecoach robbery by her four sons. Three of the boys died in an explosion but the whereabouts of the fourth is a mystery. Ma McDade believes the fourth son, whichever one, is alive somewhere, and so the money stays hidden until his return. The bartender then produces a $20 gold coin with a bullet hole in it, a good luck charm carried by all the brothers that found after the explosion. Kehoe pockets the coin.

Kehoe then rides to Wagon Mound, pretending to be one step ahead of a posse. Nevertheless, Ma shoots Kehoe, winging him. Kehoe then claims to have briefly met the surviving son in jail, but the coin that would have clinched the deception turns up missing from his waistcoat. Ma doubts Kehoe's story, but the likely widows -circumspect, cynical Sabina (Eleanor Parker), scheming, sultry Ruby (Jean Willes), ditzy sexpot Birdie (Barbara Nichols), and young innocent Oralie (Sara Shane) - are delighted by the first man to set foot on Wagon Mound in two years.

Gable's in good form but the movie is sluggish and unsatisfying for a variety of reasons, most having to do with how the script by Margaret Fitts and Richard Alan Simmons dramatize its strong premise, and especially how the four women and their mother-in-law are depicted.

The movie is structured like a mystery: Where's the gold? What happened to the twenty-dollar piece? Where's the missing brother? Whom can Kehoe trust? (Spoilers) There's no scene showing the moment when Kehoe figures out where the gold is nor is there one showing him digging it up. Rather, he discusses it with another character after-the-fact, a real letdown for the audience. Likewise, the explanation for the missing gold coin is tossed off just as matter-of-factly. There whereabouts of the missing brother is never explained at all.

A larger problem is the women themselves. Jo Van Fleet was a hot commodity in 1956, having won an Academy Award for Best Supporting Actress in her very first film, East of Eden. She was barely 40 years old but instantly typecast playing much older characters. Alas, she's not believable as the "tough old bird" next to Gable, then 55, or as the mother in-law of Eleanor Parker, just seven years younger. Further, Gable was resolutely a movie actor who knew how to play to the camera, where Fleet very much comes off as a stage actress playing to the rear of the house, and the two mix like oil and water. Nor does it help that Ma McDade scowls and bellyaches from start to finish.

Jean Willes and Barbara Nichols invariably played sexpots, the former almost always a schemer trying get rich quick, the latter usually as a "dumb blonde" in the style of Marilyn Monroe. They enjoy bigger than usual roles here, but their costumes, hairstyles, and make-up positively scream 1950s much more than most women in ‘50s Westerns, with the normally blonde Willes saddled with an unconvincing black wig and wardrobe that make her look like some kind of gypsy.

Director Raoul Walsh is clearly out of his element, as he was at his best helming brawny outdoor action films revolving around men. He gets a fine performance out of Gable, who has one very good scene near the end where Kehoe comes clean with the McDade women in a long piece of clever dialogue. But Walsh clearly hasn't a clue what to do with these women, especially when Gable's not around.

The picture is curious in other ways, too. In one scene Gable plays a pipe organ, then gets up and leaves the instrument unattended to dance with each woman by turn, in what was obviously a carefully choreographed sequence. Alex North's orchestral score swells as the dancing intensifies but instead of charming the movie audience the sequence merely confuses. Why is everyone dancing with no music? It's a movie-real moment that doesn't come off.

Filmed in CinemaScope, The King and Four Queens has soft and blurry dissolves and title elements, but most of the time looks great for a mid-‘50s ‘scope title. It's likely this was originally released with four-track magnetic stereo in at least some markets, but if that's true only mono elements appear to exist today, with the DTS-HD 2.0 mono mix acceptable, with English subtitles offered on this region "A" disc.

The lone supplement is a trailer, but it's a good one, emphasizing like its title Gable's status as "The King" of Hollywood.

The King and Four Queens starts out well, and has a good basic idea to work with (Clint Eastwood's The Beguiled sort of uses the same premise), but these promising components never come together and the movie is a disappointment. Rent It.