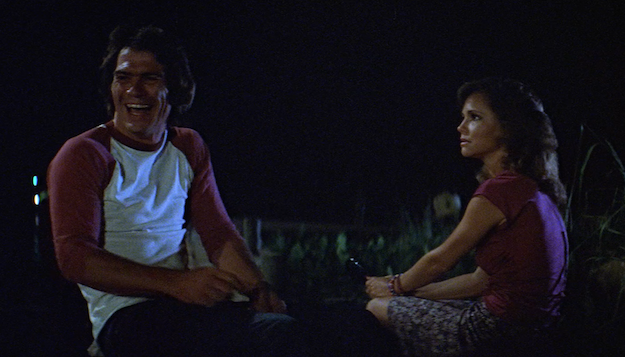 Technically, the 1981 comedy-drama Back Roads was released after Raging Bull, the masterpiece that is now considered the closing bookend to Hollywood's '70s renaissance. However, in a blind taste test, Back Roads' loose plotting, hard-luck characters, and grimy atmosphere could easily get it mistaken for New Hollywood product from five years earlier. Director Martin Ritt (Norma Rae) and writer Gary Devore (Running Scared) invest their story with a downbeat integrity that makes it quite remarkable today, even if the film actually might have benefited from more humor and It Happened One Night-style hijinks.

The film is a road-movie romance, with a gritty aftertaste. Sally Field is Amy, a $20 streetwalker who can't forget the son she gave up a few years ago. Tommy Lee Jones is Elmore, a washed-up boxer who pulls chump-change scams to make it through the day. They meet when Elmore convinces Amy he's got the twenty bucks for a roll in the hay, but then admits post-coitus that he's actually flat broke. She curses at him and heads right back out on the street, but Elmore tags along, trying to make amends. In the process, he cold-cocks an undercover cop attempting to arrest Amy, which makes it necessary for both of them to book it out of town.

On the road out of Mobile, Alabama, they decide to head for California, though not for any particular reason apart from California seems like a nice place to go. This lack of a specific goal waiting for Amy and Elmore at the end of their trip points to what is both enjoyably idiosyncratic and occasionally frustrating about this film. It's realistic that these two characters would hit the road for no other reason than it's more attractive than sitting still, but it makes the inevitable setbacks in their journey less meaningful because the scale of this getaway is arbitrary.

Along the way, Amy and Elmore have a run-in with a gun-toting waitress, they spectacularly fail to hop a ride on a moving freight train, they spend a night sleeping by the road, and they lose and regain affection for each other. Field and Jones reportedly hated each other's guts throughout production, but it doesn't show onscreen. Even when their characters are on the outs, both actors seem believably connected and attracted to each other.

An Officer and a Gentleman's David Keith plays a sailor and overconfident "pinball wizard" who give the pair a ride and who becomes smitten with Amy. When he inevitably learns of her profession, the sailor changes his tune and angrily calls her the "w" word. Amy shoots back, "A whore is a sixteen-year-old with a bad reputation. I'm a hustler!" Elmore is later given a solid follow-up to that line that exploits Jones's gruff, good-ol'-boy charm, and which probably would not read nearly as funny in print here as it is hearing him say it in the film.

Amy and Elmore are perpetually earning (or stealing) enough money to push them along their journey, then getting it ripped off or losing it some other way. When Amy tries to hook in a new town, she is shut down by a tough-as-nails madam (Scarface's Miriam Colón). Later, Amy is horrified when Elmore rolls a drunk for his pocket money, so he seeks out a boxing match he can potentially throw.

There's a sweet notion behind Back Roads, which is that two screwed-up, damaged people might be able to find comfort in pairing up. Whether there's any truth to that, or it's just Hollywood hogwash, is up to each viewer to decide. Field and Jones are good enough in these roles that they might just convince you it's true.

The Video:
Wrongly labeled as "1080p," this disc features an AVC-encoded 1080i 2.35:1 transfer which is presumably pretty old at this point. I wasn't too distracted by the video quality when I was sitting parked six feet from my TV set, but when I went in to take screen captures for this article, it became obvious that there is some sort of digital filter on the image that smudges away the fine detail. Otherwise, the image is frequently noisy and the colors are a little weak. It's definitely not the worst transfer I've come across, but it's disappointing all the same.

The Audio:
The 5.1 surround remix from Paramount's 2005 DVD has not been carried over, so the disc only offers a DTS-HD MA 2.0 mono audio mix. It does the job adequately, as this is largely a talky movie, with certain wordless passages driven by Henry Mancini's score. No subtitles.

Final Thoughts:
A surprising little film, driven by two strong performances from Sally Field and Tommy Lee Jones. If you enjoy these lead actors, you owe it to yourself to check out this lesser-known effort. Recommended.